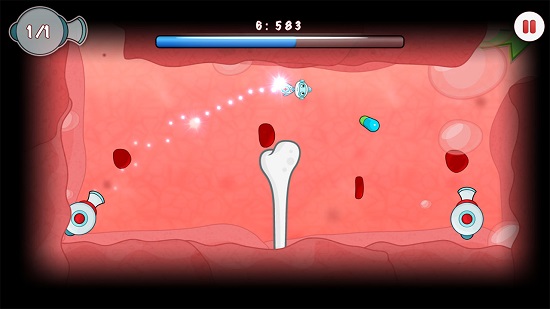 GAMEPLAY:
The game’s concept is really simple, you must help Ro’bert, a little nanobot, to complete his journey through the body of a patient, with the mission of saving his or her life. How?

You need to shoot Ro’bert across the entire level to the end, using the cannons and other elements available in the levels, becoing harder and harder with time.

When Ro’bert is in a canon, you need to use the stylus to aim the angle while controlling the power of the shot. A green arrow is used to point out where is the exit, so be attentive!

Once you clear the level, you can get a total of five energy pills: Three of them are obtainable in the level, and collecting them will charge your energy bar allowing you to boost Ro’bert by touching anywhere in the screen; this is really helpful, but be careful, because the duration of the boost is very limited. The fourth pill can be won by using the least cannons possible and the fifth one by beating the level before the timer counts down to zero.

Of course, collecting all of them is hard, and some levels need to be learned (by exploring them) before being able to find the three pills, adding a lot of replay value to the game.

There are different types of canons, for example some of them will shoot automatically or even follow you. Of course, without obstacles the game would be boring, so you will find enemies that will block your shot, elements that will affect the gravity of the level, bones blocking your way and of course, a giant enemy for the boss battles that will follow and kill you if you aren’t fast enough.

The game features a total of 50 levels in total, divided into five categories, and more free levels  in the future have been confirmed by the developer. The tactile controls of the game work excellently, being a game that’s played with the GamePad. 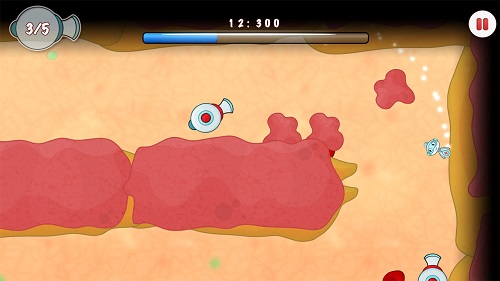 GRAPHICS AND SOUND:
The graphics of ‘Internal Invasion’ are, for an HTML5 game, excellent. It doesn’t just make an excellent use of the Construct 2 engine, it also shows how much capable the Nintendo Web Framework can be on the Nintendo Wii U.

The music is a good job overall that fits in great with the game, some songs being nicely done, and the other songs great (like the boss song, for example). The sounds effects are good too, but for some reason the music doesn’t play in the TV but it does with the FX sounds, but still this is a game that’s made to play with the GamePad so there’s no need to think about this. 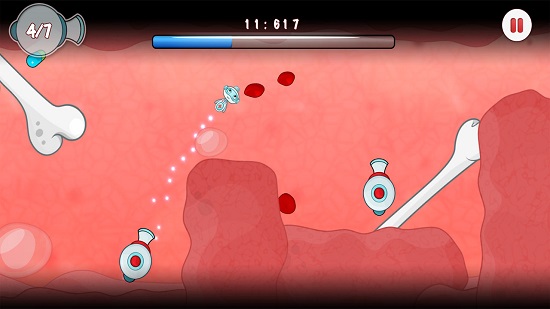 PRESENTATION:
The presentation is great, it offers replay value, a great tutorial is available to learn to play and the interface is easy to use.

Meanwhile the manual is quite basic, the only thing I don’t like in the game is a big lag that appears every time you start (or restart) the level. Still, the developer already confirmed a patch is in the work to fix this performance problem.

CONCLUSION:
It’s a good game with great graphics, a good quantity of levels and also replay value. It’s an interesting game recommended for those who loves to play with the GamePad or just, want to play something in general.

The developer confirmed that an update is in the works, fixing the performance problem. A new update of the review will be available once the update is released.