When it comes to aerial combat/mech games like this one, I tend to be very bad at them. Most of them have a bunch of mechanics and controls that you have to use in order to dodge a single missile. This wasn’t the case with Iron Combat: War in the Air. Although the controls take a little getting used to, once you figure it out, it comes to you easily. The tricky part is actually beating a level..but we’ll touch on that a bit later. For now, let’s jump in to the storyline. 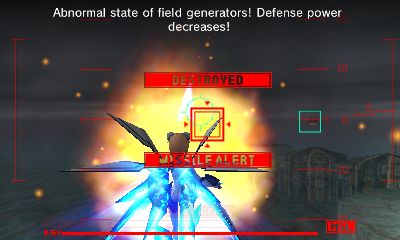 The game takes no time throwing you right into the action, but before that, text scrolls in front of a scenic view in a Star Wars-esque fashion, explaining about how there are now 2 warring factions, and the girl in a mech suit (the character you play as) is the faction’s last hope. After that, it cuts to a black screen where you are able to read a conversation between two people. These two people reveal to you that the girl (again, your character) volunteered to be put in this mech suit, and they aren’t sure why, but maybe she has realized that they are her only hope and chance of survival. They say a few more things, but one’s thing for sure, I didn’t like them after this, and I don’t even know who they are. Sounds like they’re gearing up for world domination.

After 8 levels of the game though, I haven’t really been filled in on anything else story-related. I believe this is the halfway point of the game, so it feels odd still not having a clue of what’s going on. In level 5 or so, though, another mech shows up. At first, your dispatcher (more on that later) tells you the unit is an ally, but then you have to fight them until they tell you they’ll be back later and they flee. I guess this is a mech from the warring faction but..again, it left me feeling lost. 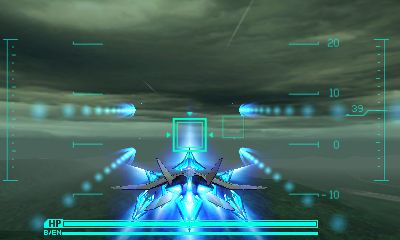 Okay, so let’s talk about the game-play. There are two main game modes: Story Mode and Free mode. Free mode lets you go back and try to earn an S rank on the missions you have already completed in Mission mode. Mission mode is..pretty self explanatory, but let’s talk about it. This game skips an advanced tutorial, but if you’re familiar with aerial combat games, it isn’t hard to pickup. When you begin the first mission, you hear a Japanese voice talking to you (the game is in English subtitles, but I didn’t mind it). She tells you that she’ll be your dispatcher, and she’ll be helping you throughout the missions. She tells you how to move, but then she tells you it’s better to figure it out through experience, so she sends you off to fight enemies (and I actually prefer this, because tutorials can be very tedious).

There are two basic ‘forms’ of control: vehicle mode, and mech mode. Both forms have 2 different types of weapons: the blaster (machine gun?), and the missiles. Each form also has a feature that the other does not. For example, in Mech form, you can use RB to strafe and attempt to dodge the oncoming missiles, whereas in vehicle form you can charge up a huge blast with A and blow away your opponents. The missiles are also slightly different by means of fire depending on which form you’re in. 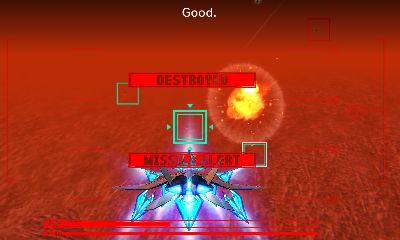 Earlier in the review, I mentioned that while the controls weren’t hard to pick up, the levels were difficult to beat; and I think that’s an understatement. I believe I was stuck on mission 2 for a good bit until I finally figured out my personal strategy (dodging, firing, dodging, firing..getting up close and personal sometimes). There are upgrades for your mech in the categories of ‘Attack Subunits’, ‘Defense Subunits’, ‘Boost Subunits’, and ‘Range Subunits’. These upgrades cost a high amount of credits (it seems high in the lower missions because you’re not making many credits per mission, and if you fail your payment is 0), and the difficulty curve seems to escalate immensely after each level.

Combat is simple: your dispatcher tells you where the enemies are at, and they all have green squares around them. When you get close enough, the square will turn red, meaning you are locked on. The auto-lock feature was actually very useful, seeing as how your machine gun and missiles hardly ever missed while a unit was locked on. But combat can also be very difficult, since at times you are facing several enemies at once, and dodging missiles is sometimes impossible. 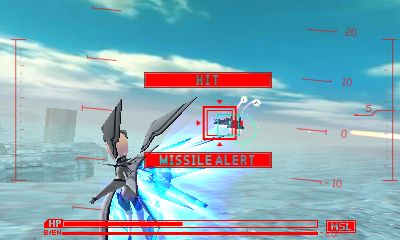 On the top screen of your 3DS is where the action happens. On the bottom is a radar (that I haven’t exactly figured out how to read) that shows you were incoming missiles and enemies are, and the direction you need to go in order to dodge them. While there are a great number of enemies most of the time, it keeps battles intense, fast-paced, and interesting. You always have to watch out for enemies if you don’t want to get hit. A few hits from a missile and you’re blown to bits.

I don’t expect anyone to pick this up right away; it took me plenty of tries to finally get the hang of everything, but if you can figure out when to switch to the different forms, when to fire, and when to dodge, you’ll be just fine. It’s a hard game, but it was so fun to play that I found it very difficult to put down. The intense music in the background and a Japanese lady shouting furiously out you just makes the experience all more enjoyable. 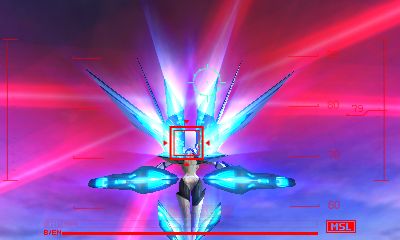 Overall, Iron Combat: War in the Air is a fantastic game. I’m giving it an 8/10. It lacks the development of its storyline, and it’s a difficult game, but the music was great, the game-play was intense, thrilling, and just plain fun, and I actually liked the character voice-overs as well. If you love aerial combat/Mech games, you should definitely pick this one up. With high intensity battles, fast paced combat, and really great music, Iron Combat: War in the Air does not disappoint. And at $6.99? Well, I’d consider it a steal.