Notes: The review was done on a 3DS XL.Thus, experience might change depending on if you play it on a regular 3DS or a 2DS, or if you’re playing the game on the N3DS. If you’re N3DS-proof, note that you can still use the Circle Pad Pro.

Nowadays, it’s relatively common to find first person shooters or third person shooters on most of the platforms: Halo, Call of Duty, Battlefield, you name it! But, while the portable consoles don’t get those, they can still count on lesser-known yet good titles to actually have a FPS/TPS library.

And IronFall is one of these games. While the game modes are DLCs (that being probably the only con noticeable) you must pay for, if you have those, you get a relatively complete campaign mode, and access to a multiplayer mode.

For this review, I will only focus on the campaign, and I’ll ignore the multiplayer (since it’s kinda like an optional mode, right?). Also, I’ll try to avoid major spoilers for you people who haven’t played the game.

So, let’s skip directly to the gameplay. The game actually explains you how to play it. Though most of the commands might seem a bit weird, let me tell you: you get adapted to it quickly. The lower screen is used to aim, the analog stick is used to move, L is used to fire, R is used to aim precisely, Y is used to reload your weapon. And A is used to switch between weapons. Other than that, you can sprint by pushing the analog stick twice in a direction, which makes you heart rate go higher. 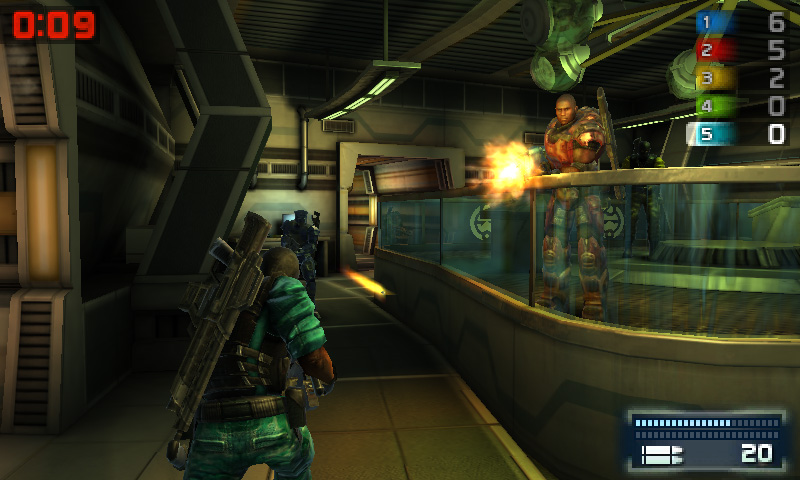 Talking about the heart rate, it’s basically the health system. When you get touched, this rate goes higher, and if it goes too high, well, it’s over for you! Like I said, sprinting makes the heart rate goes faster (but don’t worry, you won’t die from making a marathon), and doing nothing, on the other hand, makes this rate goes lower (down to 60-70).

Also, when it comes to reloading, you might consider putting yourself between a wall or something, because pressing Y trigger a small bar to appear with various colours. Pressing Y when the cursor is in the green zone allows you to fire more ammo before reloading, and, pressing Y in the red zone penalizes you with having to wait a small while; and this can be crucial. 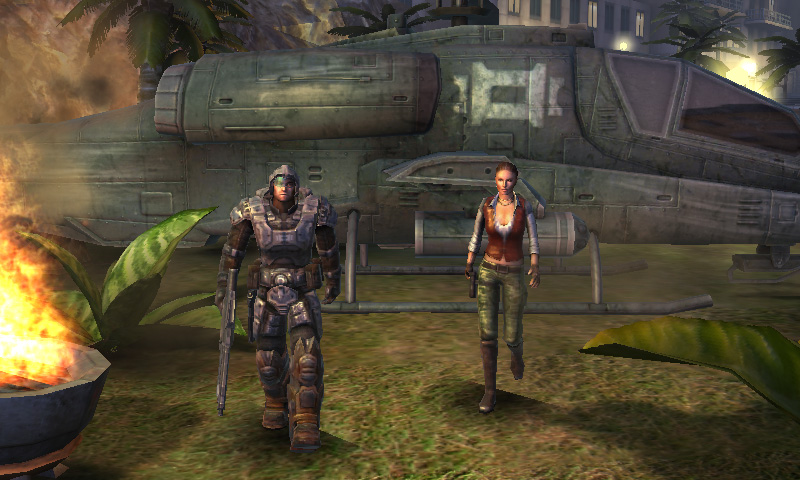 No, this isn’t a cutscene. These are in-game graphics.

Graphically, it’s amazing. It looks like a PS3 or even a Xbox 360 game. The textures are pleasant to the eyes, and the models are good, you won’t see the polygons that easily (can we even see them?) !

But then comes IronFall’s weakness: the music. When facing enemies or in certain situations, a piece of music will play. And sadly, it’s the same music all and over. Looped again. Though it’s nice the first times, after a while, it might get a bit boring.

Conclusion: I’m baffled. Honestly, IronFall met my expectations. With those good-looking graphics, this gameplay and that voice-acting, IronFall is a game you probably shouldn’t skip. The only cons it have might be its soundtrack (that might get a bit repetitive), and maybe its price (€19.98 to access both Campaign and Multiplayer modes, or €9.99 for one of those only). Other than that, it’s a really great FPS, and honestly, this is what an FPS should be.