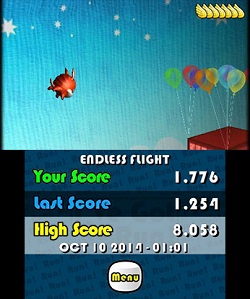 ‘I’ve to Run Complete Edition’ is quite different when compared to its Wii U version and despite its more expensive, it includes a lot more content as well as better graphics that makes the console version impossible to recommend if you consider the handheld version.

Similar to the original edition, it’s an endless runner where you need to jump from platforms in order to survive with the objective of getting the highest score possible. When you begin the game, you will play the classic mode.

Unlike the Wii U version, you will find six characters and six modes: 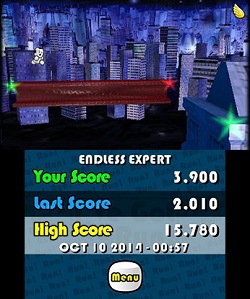 While some modes are similar, each mode contains its own theme featuring a different song and graphics (except in flip mode). Only three characters are part of the title’s world (even when there is no story), where the other three characters are Armillo from Armillo, Kubi from ‘Bit! Boy! Arcade’ and Randaball… sorry, I don’t know where that one is from.

Each mode includes its own highscore, but they can still be mixed with the option called “Final Score” that adds up all your individual scores, being able to share (manually) on Miiverse. Since there is no online leadboard included, it’s just a big missed opportunity considering other titles of a similar genre already included it such as Cubit The Hardcore Platformer Robot and Bike Rider DX2: Galaxy.

The audiovisual aspect of the title is nicely done like I mentioned before, the graphics are quite varied and a good quantity of melodies are offered in order to not make the experience really repetitive. It’s also worth mentioning it works to a smooth 60 fps just like the original title.

The presentation is great, featuring an easy interface, plenty of gameplay options, a well done manual and the controls work flawlessly. The only two flaws that are worth mentioning are (1) the 3D effect does not work well (most of the time it makes you feel dizzy) and (2) the lack of online leadboards.

Conclusion:
Despite of making the Wii U version worst, if we compare both releases, ‘I’ve to Run Complete Edition’ is a great offer as a infinite runner where its only main flaw is the lack of online leadboards. It’s worth a try, mostly if you don’t already own a similar game in your collection.