A LITTLE CLOSE TO AWESOMENESS!

The game is mainly a platform game with some mini-games so you can consider it an adventure game as well. The stages present 2D and 3D levels and the level designs are really good, presenting some variation in the stages.

The first thing you will notice is the easy controls that the game has: with the button B you can roll which is useful to attack, pressing A will make you jump, and jumping while pressing the B button will allow you to attack in the air or make a double jump. There are also platforms and jetpacks, and they can be activated with the button Y.

The game isn’t easy as the controls because you will find a lot of action between the levels and a lot of challenges. The level design is really solid but sometimes the difficulty is unbalanced making you lose a lot of lives.

That isn’t all. In some stages you will find special stages such as a little platform level (mostly a 3D one) with a time limit and the objective of it is to win solar cells and a life.

Solar cells are important because you can play some mini-games to win extra hearts which are really needed in a lot of the game’s levels, thanks to 3 different mini games available in the 3 towers.

Once you finish the 5 stage levels, you will be able to beat the boss to finish a world.

Between the worlds, you will be able to play a different stage. Jett Race, Skydive and Cloud Assault are the three different stages presenting different gameplay where you will play the final boss last.

In the entire game you can find a total of 24 images, once you get them all, you will unlock an extra mode named ‘Bonus Attack’. This is, in short words, a time attack with different special stages consisting in a score and rounds.

You may assume you finish the game at some point, however, that’s not true. You will eventually get access to the Mirror World but this time you have to find five golden solar cells to beat the level. This gives the game replay value because you can play the entire game again differently.

In terms of gameplay, this game is really solid and good, and thanks to its duration and replay value, you will be playing the content of a retail game, but at a low cost.

The game looks good, the 60 fps of the game will offer you a really fluid experience, and that combined with the well made 3D effects, you can play without any headache with the time.

The textures are well done, except in stage 5 of the 3rd tower, and shadows can be better in the 3D stages but you can’t ask for more considering the price tag of the game and its overall quality.

In terms of graphics, the game looks really fluid with 60 fps and 3D effects.

The soundtrack of the game isn’t epic but it’s still good. The music has variations and you won’t get tired of them, helping the big replay value of the game. The voice of the character isn’t annoying and the FX sounds present a lot of quality. 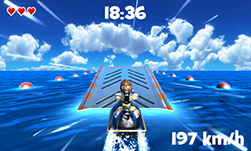 For this review, the game was played in Spanish and in English, and the translation work is perfect. The game also has a cinematic intro that was very well made. The bad thing is that there are no subtitles in the Spanish translation of the game.

The presentation of the game is really well done and the game is well made. One problem is a bug game: the game over screen sometimes won’t appear (let’s say, a chance of 10%), making you close and open the game again.

The tutorial is easy to understand but like I said, the difficulty of the game is really unbalanced at times making this game better for the hardcore gamer than casual ones.

VERDICT: 85/100 (Excellent)
This game has a lot of potential and it’s really used. With good graphics, level design, replay value and different gameplay, Jett Rocket II: The Wrath of Taikai will offer you a good time if you are able to beat it with the unbalanced difficulty. It’s a must buy for a lot of eShop users. This game is really worth the 9 dollars.