This is not the first racing game to be ported from mobiles: Bergsala Lightweight released ‘Hello Kitty Kruisers’ this year for $19.99 as a retail title via Nintendo 3DS eShop while it was already available for Android/iOS devices for an affordable price of $0.99. Code masters also released ‘F1 Race Stars: Powered Up Edition’ this year, which is yet another eShop title and is priced at $29.99.

However, now it’s time for Jett Tailfin, a game that was confirmed to be released as a retail title two years ago. The real question is, is this third time the charm? 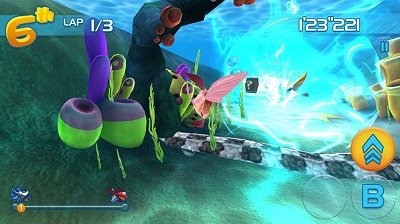 GAMEPLAY:
Jett Tailfin is an underwater racing game taking some elements of kart games such as Mario Kart. Its mechanics are distinct when compared to those usual kart racing games. When you start the game, there are two different modes: Quick Play and Challenge.

Quick Play is an option to play any type of race alone or on multiplayer mode while Challenge is the story mode that allows you to unlock the content of the game. There are also three different cups and the difference between is the duration. The multiplayer mode of the game supports up to four players and a good touch is giving the Gamepad player its own screen.

The object system of the game is somehow broken, where avoiding them is just a matter of pressing one button. There are six different objects in total where five are used for attack and one for defense. The levels also feature enemies which can be difficult to avoid as they sometimes attack you to make you lose time (and places). 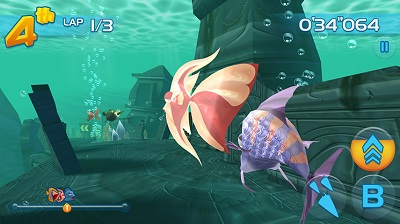 There are a total of 16 levels and 14 different racers (with four colors each). A majority of the levels need to be unlocked while you progress throughout the game. There is a good quantity of content in the game where the designs for most of the tracks are nice overall. Sadly, the game is broken enough to make them mediocre.

The game can be played with the Gamepad or with the Wii Remote and both controls use the gyroscope to move on the level. However, the buttons used are different. Meanwhile the button placement is well placed although the controls are terrible.

With the Gamepad, you break with “L”, use the weapon with “ZL”, accelerate with “L”, boost with “ZR”, toggle HUD with “Y” and pause with “+” and “-” buttons. The sticks aren’t used but you can evade using the “Left” and “Right” buttons of the Control Pad, and change the camera with “Up”. You can also touch the screen’s buttons to use a weapon or boost, the latter one can also be done by blowing into the microphone.

For the Wiimote, “1” is used for acceleration, “2” for brakes, “A” to use the weapon, “B” for the speed boost and finally, similar to the Gamepad, you can evade using the “Left” and “Right” buttons and change the camera with “Up”.

The main problem with the controls is the need to calibrate every time. While calibrating is a fast process, you will be pulled to one side very often. Some of the tracks feature mapped parts that make the experience more awkward than it really is.

Sadly, the hit detection is quite poor, the load times are sometimes pretty long and the AI can be unbalanced at times. There is also a large quantity of bugs that do not allow you to enjoy the game to the fullest that includes game breaking glitches where the console gets frozen once. Some bugs also include the game not registering a lap (while still being in first place) and wrong way alerts even when you’re at the start line.

There are some more flaws to mention however, I will not proceed further with such negative commentary here in the gameplay aspect of Jett Tailfin. 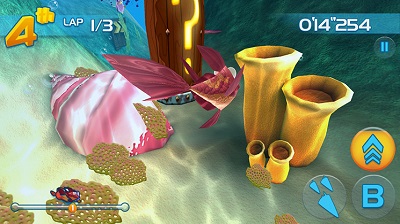 GRAPHICS & SOUND:
The game’s graphics are the same to its mobile version, however, it still lacks optimization which ultimately leads to a lagging experience, or in the worst of cases, even freezing situations that force one to shut down the console.

Jett Tailfin also includes cut scenes being a cool touch, even when the races don’t fit with the stories at all. Essentially, I hated that the videos weren’t optimized for the console which presented black borders around the video as if it was on a lower resolution than the game’s screen.

The soundtrack for the other side is quite charming featuring a nice quantity of melodies although it cannot glow like it should due to the low variation of the instruments (where the selection doesn’t fit at all with the game’s setting).

The voice acting is mixed due to some voices used for the game being nice and others being extremely poor. Also, for the races you will be hearing the same voice clip over and over as there is no variation. 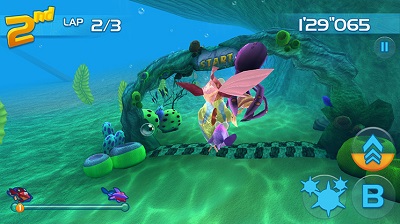 PRESENTATION:
The presentation, without counting the flaws I already elucidated are good. Jett Tailfin offers a really complete manual and the interface is easy to use, There is a good quantity of options, the calibration option is really quick to use and there is a pretty good quantity of content, including new tracks, exclusive fish and other details.

However, I do not find it okay to pay almost 12 times more for a port of a mobile game considering how bad the port is in technical aspects whether or not it entails more content than the original version. If you don’t want to do the math, the eShop version costs $34,95 and the mobile version $2.99.

CONCLUSION:
The conclusion is that if you are on a budget and therefore cannot afford Mario Kart 8, you can still have money for this one. You can purchase Sonic All Stars Racing Transformers or the mobile version if you don’t care where you play. Finally, an unpolished port of a mobile game for a high price makes a potential game on shovel-ware, and that’s just sad.