TAKE THE MUSIC TO YOUR HAND, AND RELEASE YOUR POWER. 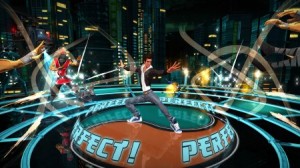 GAMEPLAY:
Kickbeat Special Edition is a rhythm game, what this means? You will have the level, and following the music, you need to press certain buttons in order to win it. So, in this title you’re a Kung Fu warrior who needs to recover a sphere that contains all the music that exist and will in the world, so you will be actually fighting bad guys.

The core gameplay is this: the enemies will walk around the circle area you are, with the intention to attack you. Of course you will need to counterattack them, pressing X, B, Y or A depending from the place they’re attacking you. In order to win more points, you need to hit them in the exact moment, where your score will be based on your precision and timing.

But be careful: mashing the buttons for nothing will make your character be exhausted, being unable to move for a short time. Due there’s a health system, if you are hit by the enemy you will lose health being represented in the center of the circle you are, once empty you lost the battle.

They’re three types of enemies in the game:

The enemies can also do chains, needing the hold the button until the second enemy is attacking you, and also bring objects in the form of orbs over them, where you will need to press the button twice in order to get it. Those can be: 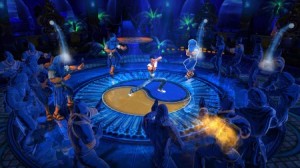 The Chi is actually a bonus you get for playing correctly, if you activate it, your score multiplier will be doubled. Use it once you have it. In the case of the Shockwave and Shield, try to keep them for emergency moments.

Now, the game present four categories (Normal, Hard, Expert and Master), where each difficulty has it own level progression, still it can be quite unbalanced sometimes. The hardest one, Master, will be the bigger challenge to any type of player due its random releases of notes, unlike the another three where it follows the pattern. Also, on Expert and Master difficulty also have an extra rule: if you fail to obtain an orb (object) your combo will reset. Additionally, a second character story is also available, Mei, where the difficulty is also a little more higher.

After finishing a level, you will get a star rating depending on your performance, where its color is based on the difficulty. Those are needed to unlock the additional outfits and characters in the game, adding a great replay ability to the game.

In this games, the controls are really important, and don’t worry, they work flawless. Still I recommend to play it with the Off-TV mode, it works great. They are more things to talk about but I will stop here. You will need a few surprises when you play it.

GRAPHICS AND AUDIO:
Great looking graphics, a good quantity of effects and a smooth 60 fps makes a fantastic visual experience, including excellent animations and detailed models and textures. The game also features some cutscenes, made with a comic style animations that looks nice, using good drawings in general.

The soundtrack features 24 playable songs featuring different genres like Rock, RAP, House, etc. From those 24 sounds, six are actually new for this enhanced version featuring the popular Internet artist enV (If you were on Newgrounds, you should already heard about him).

Their average duration should be around three or four minutes. The songs presents a lot of quality, some of them from important artists, still a few of them can feel a little repetitive. The voice acting is nice, doing a good companion to the cutscenes.

Now, the main problem with the music is if you don’t like the tracks, you won’t enjoy the game at all, mostly because some of them can be outdated for some people. Here is the list so you can check out: 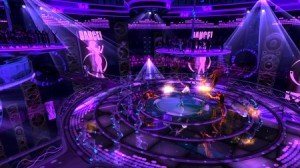 There’re also scoreboards based in your total score for example, and a good quantity of unlockables to get (still I’m not sure if you will be able to get them all). In short words, Zen Studios really knows how to polish and present a title before publishing.

CONCLUSION:
KickBeat: Special Edition brings an interesting musical experience that package a lot of content considering its price tag. It’s a game that looks wonderful and the presentation is excellent, still the difficulty will make the game hard to master for casual and core gamers.