After 25 years of the occurrence and release of the first debut of the series, Kid Icarus for the NES, Kid Icarus: Uprising made its glorious release for the Nintendo 3DS in March 2012 with an all new story to the series and a new way to play that takes the player unto the most epic quest.

During the gameplay, the player takes the role of Pit, an angel who is the commander of the army of light and the personal guard of the goddess of light, Palutena. With the aid of Palutena, you will soar the skies and fight on land to defeat Medusa’s commanders and Medusa herself, who has been resurrected and seeks vengeance to wreak havoc upon the human race on Earth and Skyworld. 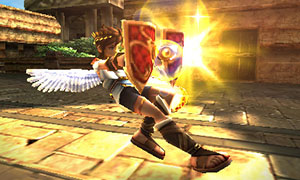 In Solo mode, you can equip your weapons and powers before setting out to select a chapter to play. Although you are not given much weapons or powers at the beginning, you will collect many throughout your adventures. There are many different categories of weapons (nine in all) , each with their own styles of gameplay and modifying effects so it’s easy to find which may suit you best.

In ‘Together Mode’, you can battle it out with your friends or anyone in many unique stages, either locally or globally. Enjoy the two modes the game has to offer : Free for All and Light vs. Dark, whereby you are split into two teams of three. It’s as simple as choosing your weapon and powers and heading out. Many rewards are given out to all players which can be used in both Solo and Together which make playing the game really addictive and fun.

The controls in the game are perhaps one of the things that may be interpreted as something quite complex. It may seem like this, but it is easy to pick up the mechanics and is perfected overtime with practice, I myself have found it pretty hard for me to play comfortably to this date. However, the intensity of Solo chapters can be freely adjusted to one’s play style which makes the game really easy to play at their own pace, though naturally, the more risk the more reward. The game also supports the use of the Circle Pad Pro which is useful to left-handed players and the retail version of the game comes with a 3DS Stand that can be used. Inputs for buttons can also be changed in the settings to one’s liking which makes up a lot for the game. In-game tutorials are also included to teach a player the basic mechanics. 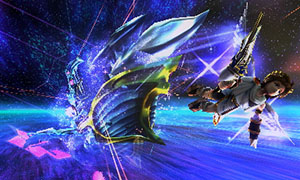 The graphics in Kid Icarus: Uprising are really beautiful and appealing. Wherever you are in the game, the graphics are really crisp and clear, blending in perfectly with the 3D effect, making this a really nice quality in the game. Each model and character has been revamped to fit the era of the 3ds. Although the textures may not be exactly smooth, the overall graphics are really excellent.

The music, sounds and voices are also very well played, as they match well in the corresponding situations. Sounds are also very clear, and how loud or soft you want either the music, SFX or voice to be can be adjusted in the options menu. Sometimes the voice dialogue can be found annoying and distracting to some, but they are more often enjoyable and quite essential to know the story of the game. Yet there is an option to disable it after beating the main story. 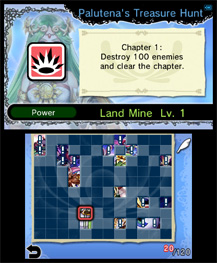 Aside from the general gameplay, there are also many features and stuff in which you can do to. Such as a music album to listen to various music tracks from the game in the Vault, and supporting special AR cards to collect and view character idols and watch them battle. The game also features a Treasure Hunt where you complete certain objectives to earn many rewards. Furthermore, there are so many things the game has to offer and include that you may be sinking in more hours into the game than you’d expect.

Overall, Kid Icarus: Uprising really proves to be worth its price in most of its aspects. Although the controls seem too complex, many of the other things in the game make up for it. This game gets a 9/10 since in general terms, it is a great game to play and has many features than one would expect. Many of its cons are made up with so many other things that excel in the game. A must-have for any fan of the Kid Icarus series or those who’d enjoy a good epic fight and story. A truly magnificent uprising for the series.