STORY:
A mysterious being kidnaps King Dedede and Kirby is there to save the day, and for that, he needs to climb a giant plant that appeared in Dream Land, visiting different places in the sky. Sadly, this is the only thing I can say without spoiling the game.

The story is actually simple, however, almost all of it is explained at the end of the game.

GAMEPLAY:
I will try to be short about the basic stuff: It’s a platform game – you jump, beat enemies, tackle a little puzzle challenges, find little collectibles that will help you unlock extra levels, etc. Like any platform game.

What makes Kirby different? Well, in first place, there are little elements you will easily see, for example, he has a life bar that can be refilled with food and he also uses little stars instead of coins. When he collects 100, he gets one life.

When you start to play, you will see the difference: he can absorb enemies, having different skills and ways to play each. There are also a lot of options in the game. Most of them will allow you to resolve specific parts of the levels, finding hidden keychans for example.

Some of the new skills are the archer, and the bettle, however, the one that will appear a lot is the Hypernova fruit. That allows Kirby to inhale larger enemies and stuff, including trees!

The main problem with Kirby Triple Deluxe is that it’s actually easy and for a majority of the time, the game never uses its potential.

The difficulty isn’t balanced either. When you start the game, it’s really easy and the only reason you will lose a life is if you skipped something and you’re too lazy to play the level again. Once you’re at the end of the game, it gets harder, maybe too hard for the audience that it’s aimed at.

The level designs are good and some stuff are hidden well in the levels. If we add excellent controls, they made a great work. Even the gyroscope controls are great in this game (something that surprised me a little).

Now I will speak of another aspect of the game, like I said, I want to be short on this. The game features another four modes to play, two of those unlocked when you finish the game.

First we have Dedede’s Drum Dash. It’s a little rhythmic minigame that includes three levels, featuring different songs, and a fourth one if you manage to have a gold medal on those. The first two levels are easy but the last one gets really hard.

Second is Kirby Arena. It’s a minigame with gameplay similar to Smash Bros. Sadly, it’s really unbalanced, but still fun. Something good to add is that this game is compatible with Download Play, so only one copy of the game is needed to play with up to 4 players.

Next one is a trial mode that needs to be unlocked. You play the game as Dedede. It’s just you and him, playing parts of every level and there you will find the challenge you never got from the story mode.

The last one, also needed to be unlocked, is a coliseum mode. In this mode, you need to beat enemies – the more the better. This one is played as Kirby.

StreetPass is also used in this game, however, it’s only used for score sharing, sharing special items, and more keychains in the levels.

GRAPHICS AND AUDIO:
The game looks great, being one of the best looking games for the Nintendo 3DS and I don’t mean that for being realistic, I mean for its quality.

The game is colorful. On some of the levels, there are a lot of interaction with the background, it has a lot of details and it’s really colorful.

The 3D effect is excellent as well and you can clearly see how they played with this effect, making a great visual experience.

The audio for the other side is nothing memorable, some melodies are catchy, but nothing special. The sounds of the game are excellent and the only voice acting you will hear is of Kirby which is really cute, however, like Link (from Zelda), he doesn’t talk. Instead, he only makes sounds.

There are also two enemies who talk to Kirby, putting text on the screen instead of using a voice that they already have for specific sounds. 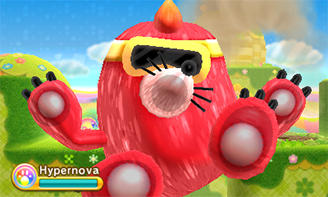 PRESENTATION:
The game has the normal stuff you usually see in a Nintendo game – a good tutorial level, a high quality manual, a nice looking game menu that is easy to navigate, but here is the best part: they made an explanation of every transformation in the game, including its controls, that can be viewed on the pause menu when it’s active.

The keychains are a great addition to the game and you will be collecting them while you’re playing. There are more than 250 of them. The only thing that I found disappointing is that you can win the keychain of the final boss in the game before playing that level, being a big spoiler.

The game is nice but the main adventure lacks challenge until the end of the game. The presentation is perfect and the graphics are wonderful. The minigames are a nice touch too.

I recommend this game for those who like relaxing games or want something with low difficulty, but if you like to have challenging gameplay, this is not your game, unless you prefer to wait and play 80% of the game.