An addicting puzzle platformer, LA-MULANA 2 demands your full attention. Give it any less, and you might not make it to the end.

Think you’ve already championed the ancient ruins of La-Mulana? Think again. The hidden labyrinth of Eg-Lana has been discovered within its depths, and what you find inside is going to challenge everything that you thought you knew.

A lot has changed in the five years since archaeologist Lemeza Kosugi first set foot in the ruins of La-Mulana. The dangers that once plagued the underground city are long gone, as are the days when those who ventured inside would never return to the surface. 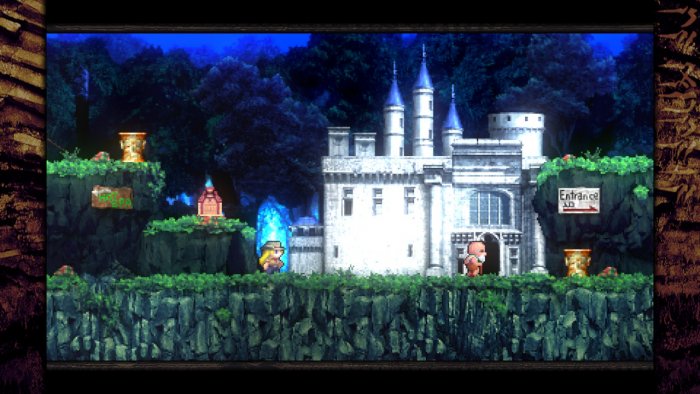 Now a major tourist destination, the inactive ruins see plenty of visitors — all of which enter and exit unharmed. The Village of Departure is thriving, and everything seems to be going well… until monsters find their way back into La-Mulana.

Lemeza has all but vanished since the events of the last game, his whereabouts completely unknown. When he’s invited back to investigate the ruins, his daughter, Lumisa, arrives in his place. Determined to solve the mystery of the reappearing monsters and the disappearance of her father, Lumisa decides to take on La-Mulana.

LA-MULANA 2, like its predecessor, is all about having a concrete plan and putting it into action. Whether or not you succeed depends on how well your carefully-crafted strategies are implemented. When you’re thrashing enemies, avoiding hidden traps, and solving puzzles, everything you do counts. One wrong move, and you’ll join the impressively large cast of corpses lining the labyrinth.

Your adventure begins much in the same way that Lemeza’s did. Equipped with only a whip for protection and a tablet for guidance, you’ll be leading yourself through daunting mazes and challenging a host of intimidating bosses.

Apps on Lumisa’s tablet take on the same role as the softwares on Lemeza’s computer in LA-MULANA. Each application performs a specific function when it’s activated, and combining two or more can provide Lumisa with perks like extended immunity or boosted weapon damage. Apps take up less memory on the tablet than the software on Lemeza’s computer, so you’ll be able to equip more at a time.

Treasures have also returned, and making proper use of them will be essential to your survival. Whether you’re teleporting to avoid a near-death encounter with the Holy Grail or using Codices to determine how much health an enemy has, treasures are your main source of support throughout the game.

Guardians are powerful enemies you’ll have to defeat in order to progress, and they’re just as tough in this game as they were in the original. Mindlessly striking at them won’t accomplish anything. Instead, you’ll want to approach each Guardian with caution and watch for patterns in their behavior before going on the offensive.

Between Lumisa and her father, Lumisa is definitely more agile. She can duck to avoid oncoming projectiles, and is able to move and attack while holding this position. It’s also easier to control Lumisa when she’s jumping; where Lemeza tends to float for a little before making his landing, Lumisa’s jumps are faster and feel easier to control.

As a result, controlling Lumisa is a more intuitive experience than controlling Lemeza. You’ll be focused more on the gameplay than on perfecting a jump, which is a welcome development to a series as frustrating as LA-MULANA.

The glossary is a convenient new tool that indexes every character and creature you’ll come across during your adventure. Along with a short description, a detailed portrait of the subject will be shown along with their in-game sprite. Not only can the glossary provide you with necessary context, but it might also give you some tips for taking on some of the toughest monsters. While not being able to access a glossary in the original game may not have seemed like an issue, it’ll be difficult to remember what playing without it was like after a few hours into LA-MULANA 2.

While movement might be a little easier this time around, the game itself certainly isn’t. If anything, LA-MULANA 2 is actually harder. Puzzles are complex and intricate, guardians are relentless, and unexpected traps make their notorious debuts at the most inconvenient of times.

Easily dismissible information received at the beginning of the game might become integral to your success down the line, so make sure you pay close attention to everything. If you don’t, you may be forced to start the game from scratch — which isn’t something you’ll appreciate after painstakingly spending hours upon hours to get as far as you did.

While the depths of Eg-Lana may prove too challenging for some, others will embrace each trial with enthusiasm. They’ll be fuelled by each failure, and if they’re patient enough, they’ll eventually be rewarded with the answers they seek… and then thrown into an even more difficult trial.

The visuals have been upgraded slightly, and as a result, are ultimately more enjoyable than those of LA-MULANA. The game stays true to its prequel’s charming 16-bit style, but adds in a bit more detail to enhance the quality of your gaming experience. For example, a speaking character is no longer represented by a bubble appearing above their sprite. Rather, speaking to a character takes you to a separate screen. The portrait of the character you’re speaking to pops up, and their words are displayed beside them.

The soundtrack sets the atmosphere of Eg-Lana just as much as its surroundings do, adding heavy suspense and intrigue to a game that has no shortage of it. Jumping from a rotating platform onto a tiny ledge that may or may not host a trap is intimidating enough as it is, but something about the music adds to the experience to make it all the more intimidating. It’s a soundtrack that relishes in your success and mourns with you in your defeat, and it’s sure to leave an impression on the player.

It’s rare that a sequel to a near-perfect game packs as much pleasure and ingenuity as its precursor, but saying that LA-MULANA 2 does any less is an insult to the series. It’s a worthy successor to LA-MULANA in terms of story, difficulty, and gameplay.

This puzzle platformer is definitely not for people who are used to the instant gratification of crossing a finish line or vanquishing the opposition in one blow. Completing this game is a testament to your will and resilience — if you’re up for a real challenge, there’s no better way to test your mettle than marching up to the entrance of Eg-Lana and demanding your trial.