What does a snail, a raccoon, a fox, and an anglerfish have in common? If you said they are in Lanternium you are correct and you deserve a cookie. This game also has those. Lanternium is a fantasy and puzzle adventure game. You can probably figure out the fantasy part already. The adventure side is the afterthought. As for the puzzle, it’s what will either enthuse you or get you uninterested because of the limits you actually have. Turn on your lamp if you enjoy a good puzzle and read further.

The fox sneaks into the raccoon’s tree via a portal to steal cookies and runs back. The raccoon wakes up startled by the noise the fox made and chases after him, into the portal, and into a magical world. He meets an old snail that guides him along the way. There’s more to this story but it’s better to learn as you play. Long story short, the raccoon wants his cookies back. The more scrolls you collect, the more you get to see of the story aside from what you hear from your mentor. If you want to hear about the anglerfish then long story short he was elected mayor by the snail race. 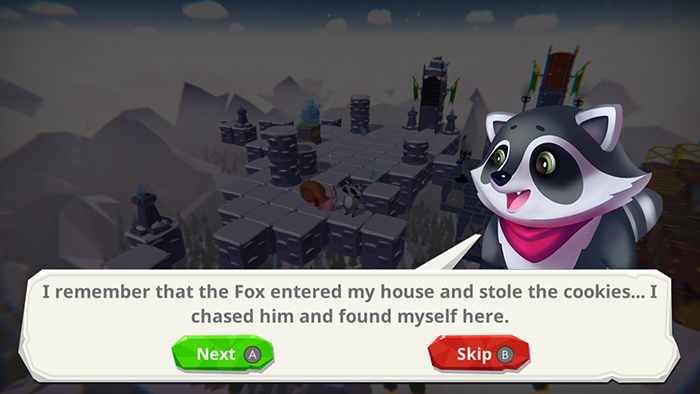 There are cutscenes at the beginning and end that use the models in the game instead of the 2D animation used for dialogue boxes. The dialogue at the beginning of puzzles only has 2D images of each character that don’t entirely match the main characters. However, you would think it’s close enough and that it doesn’t matter. It’s a fantasy game at the end of the day.

The raccoon enters a bizarre world where lighting the path is the only way to travel in order to get his cookies back. That is why the wise snail gave him a lantern. The lantern makes certain blocks of the same color as his lamp walkable. If he picks up a firefly, it changes his color palette. He can leave fireflies (red, green, or blue) on the block to keep it walkable so he can traverse farther. The firefly keeps one of the original colors you start with and the rest mesh with the others (yellow, pink, teal, light blue). Collecting every cookie in the level opens the path to the next puzzle. There are other collectibles as well as pushing any perfectionist to master the craft.

Each map is made up of many blocks on a 3D grid. There are more elements like one-way paths and hazards to keep you busy the further you progress, making things interesting. Some hazards or concepts fit right at home with a game like Pokémon such as the ice, warps, and plateaus. Ice, in this case, slides the raccoon past a certain tile into the next solid tile or sometimes off the stage. 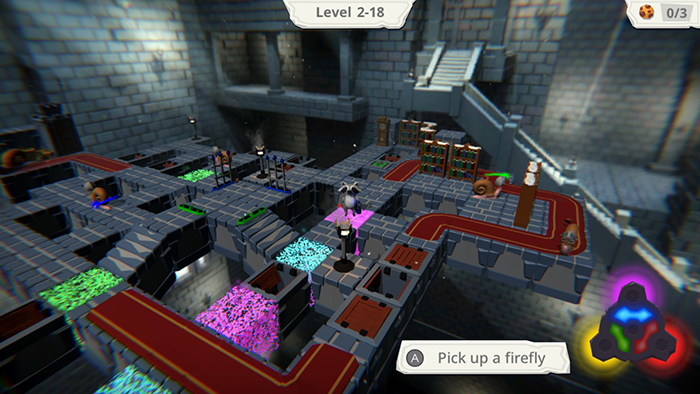 Warps disorient players by sending you anywhere on the map but note it’s never a random location. Plateaus are like one-way streets. It’s surprising that they didn’t add things like tiles that push you around, but there are some similar things that do exist in the game such as travellators. Other ideas also suggest the same for a game like Frogger like the trap doors and enemies. That just makes you start over if the raccoon touches them. In the trap door’s case, it’s standing on it for too long.

Some areas have hazards like insane snails and trap doors. When you touch/fall through them you have to start all over at the beginning of the puzzle so you may need a lot of patience when playing. The maps usually take up more space than you can see so odds are you might not get it on your first try. There are so many ways in this game to get ‘soft-locked’ (stuck without an option to progress) that guarantees you will have that happen at least once. The first boss stalks you around and the other two afterward are a variation of the same concept. Wishing for more than just that in the bosses like some sort of combat system would’ve been appreciated however it stays true to the game.

The Grand Scheme of Things

There are a total of 60 puzzles across 3 worlds. It seems little but playing the game will make you realize that each puzzle takes a long time to complete with some exceptions. It also helps to remember which paths work best as this is a 3-dimensional game but fairly linear all things considered. Solving the puzzles takes some trial and error but once you get the colors down and realize one color is more useful at the beginning and another one might be needed to exit then everything else flows into place. 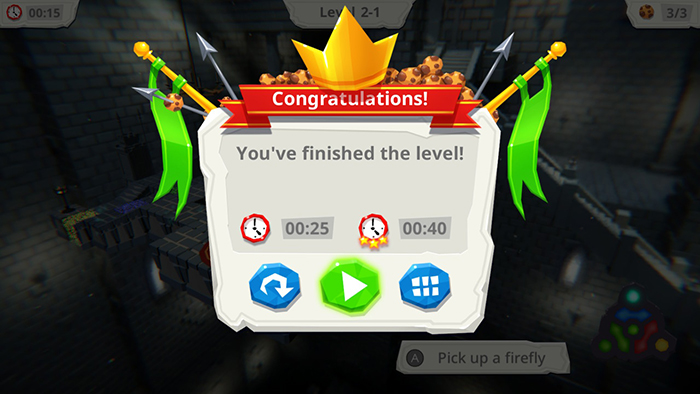 Certain areas provide a little leeway but at the risk of potentially having to start all over. There’s a bit of replayability here if you want to frustrate yourself. It’s the other mode where you can play through levels trying not to fall off the stage, by moving anywhere that’s not solid, and doing the same thing you did before only under a time limit.

The Sights and Sounds

The graphics are okay as there are different worlds that each have different appearances. Everything is nice and detailed and the enemies have different looks depending on the world. As said with the dialogue previously, the new 2D artwork for this game has a different inviting look even if the cutscenes just stick to 3D and look nothing like it. The music is somewhat diverse but gets a little repetitive. In detail, there are 3 different tracks for the worlds. There’s also a happy title theme and a dramatic theme for the bosses of each world. The Switch version happens to have more collectibles and some added graphics that look smoother, and that’s more of a reason to get it for the Switch.

Lanternium keeps you occupied, interested, hungry for more up until you beat it. Then you share it with your friend and let it sit to collect dust in your collection. Great for kids. Great for machine learning. It makes you really want another one… or play Zelda… As a standalone game, it’s need for precise movements and actions really discipline you. If you are not a gamer but still like puzzles to go with your Brain Age before it comes out then this game has you covered.