The 3DS version of League of Heroes is a port of a free-to-play iOS game. If you haven’t run away screaming after reading that, rejoice: Gamelion has, in porting this game to the 3DS, done away with all the freemium nonsense that plagues so many iPhone games. For the price of $5, you get to play this game with no ads, no micro-transactions and with buttons instead of trying to see through your thumbs. But is it worth it?

League of Heroes is an action-RPG that focuses on being pick-up-and-play-friendly. There is no real story to speak of: you’re an adventurer seeking fame and fortune, and get told that the village of Frognest is a utopia for wandering warriors. Frognest comes complete with a monster-infested neighbouring forest where you’ll hunt down monsters, a captain who assigns you quests such as ‘defeat 10 Banshees’ or ‘Level up,’ a blacksmith who sells you weapons, a herbalist who sells potions and treasure maps, a trainer who teaches you new abilities and conditional stat boosts, and (my favourite) a crazy old hippy grandma who assigns you fetch quests such as ‘Bring me 20 jaws’, cackles madly and talks often of her long-gone teeth. 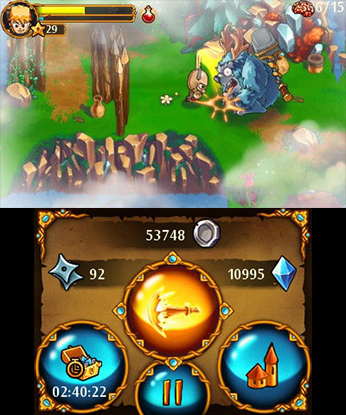 Once you accept quests from the captain or granny, you leave the village and enter the Frognest Forest, where you hunt down all the monsters in the stage you choose and try to fulfill the quest conditions along the way. Besides quests, there are also Challenges assigned automatically to you which are renewed every four hours. Challenges are quite similar to quests, such as ‘Defeat this many of that enemy’ or ‘Break 20 pots or jars’, but sometimes extend into the bizarre: ‘Crush 20 bugs.’ There actually are little bugs moving around buildings that you can squash by stepping on them, which is a nice bit of detail in the stages. The challenges and quest tasks are often concurrent, so you get rewarded twice for completing their conditions. A cool feature is that the challenges’ timer counts down in real time, not just in the game, so if you turn off your 3DS and pick up the game four hours later, you’ll have new challenges awaiting you.

After completing stages, you return to the village (although you can choose to stay in the stage and search for treasure and return later by touching the Village icon on the touch-screen) and report to the captain to get your reward for quests you’ve completed. Every time you complete full sets of quests (there are three quests in each set) you rank up as well.

The gameplay itself is pretty simple and casual-gamer-friendly. You look for monsters in the stage, guided by a skull-and-arrow that appears at the edge of the screen showing you where the beasts are, find them and attack with the A button or Y button for a more powerful Active Skill that is unlocked once you reach Level 10. The X button is used for ranged weapons such as shurikens, throwing knives and throwing axes – you have a limited supply of them, but can buy more from the blacksmith. When enemies are defeated they drop money, the granny’s fetch-quest items and EXP. Once you get enough EXP you level up which raises your stats, allows you to buy more powerful weapons and items from the blacksmith, encounter more kinds of enemies and buy better abilities from the trainer. Along the way, you break pots and jars and open treasure chests to get silver coins, which is one of the game’s two currencies; the other is in gems.

You buy stuff using silver coins and gems, often using both to buy a single item – for example, the blacksmith may demand 4000 silver coins and 6 gems for a new suit of armour. Gems are more precious, because while all enemies drop silver coins and you can find them in pots, jars and treasure chests too, gems can only be earned by completing sets of quests for the captain, Granny’s fetch-quests and by defeating bosses. Bosses are the only enemies who actually require anything more than simple button-tapping to defeat; you have to work out your strategy to beat them and make sure you avoid their attacks.

There are some minor annoyances in the gameplay that affect the overall package. One is that there are so many objects in the environment to add detail to it, and pretty much all of them have collision detection so you’re often negotiating your way around clutter to reach enemies. Another is that the Active Skill system feels like an afterthought. To make your Active Skill powerful enough to actually be worth anything, you have to hold the Y button for several seconds to charge it up, and you can’t change direction or move or do anything while charging it up, leaving you open to attack by enemies, and if you take a hit, your Active Skill gets wasted. Another is that the aforementioned myriad objects with collision detection mean that ninety percent of the time, even a charged Active Skill gets wasted because one of the environmental details gets in the way instead. Also, the game has only one undeletable save file, and if you want to start the game over you’ll have to delete the whole game and redownload it. The touch-screen options, such as exiting the menus or selecting stages, can’t be navigated using the buttons. These small annoyances, if removed, could have made the game much better. 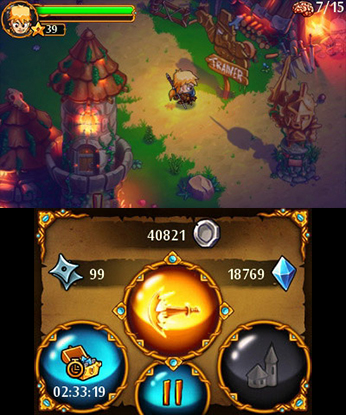 The visuals are very good, with bright and colourful environments and entertainingly drawn characters and enemies. You can enable weather effects and day/night effects in the options menu – surprisingly they weren’t enabled by default. Even with a large amount of enemies onscreen, there wasn’t any slowdown.

The game’s sound doesn’t fare as well. The sound effects are all borrowed, so they sound too familiar and in most cases I could remember very well where I had heard them before. The music is forgettable and monotonous. However, a plus point is the game has lots of voice acting. The voice acting is very good and the characters’ dialogues are quite funny, down to the trainer parodying a popular line from Skyrim, saying, “I used to be an adventurer like you, but then I took an axe to my head.”

For hardcore gamers, League of Heroes isn’t interesting at all and it will no doubt come across as boring and repetitive. But the game’s target audience is casual gamers, and it suits them very well: the game is saved every time you enter or leave the village, the gameplay is simple, a couple of stages can always fit into five-minute gaming sessions, it’s humorous and the art style is colourful. If you’re willing to overlook the minor annoyances in gameplay and the obvious flaws of an iOS port, there’s plenty of fun to have here.