Nintendo has announced a new Legend of Zelda title for the Nintendo 3DS/New Nintendo 3DS at E3. It’s been confirmed to bring a new feature not usually seen in Zelda games: The ability to play with friends cooperatively with up to 3 players. The ability to carry other Links is also now available, which allows you to reach areas which are higher and hit switches/enemy weak spots which are normally out of your reach. 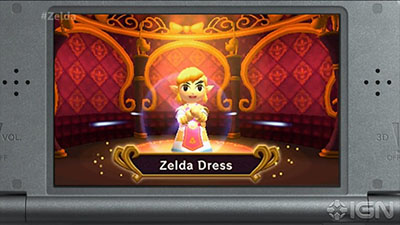 Slight character customization options will also be available in-game, ranging from Spin Attack Attire, Lucky Loungewear, Big Bomb Outfit, and a Zelda Dress, which will all grant separate abilities depending on the clothing equipped.

The game has an identical visual style to that of The Legend of Zelda: A Link Between Worlds, and will also feature some previously-known enemies.

Here is a reveal video, showing some gameplay: