In the game, you work with foals; your partners are Anna and a vet ironically named Overwork. You can create your own foals and raise them into yearlings. After they become yearlings, their information is saved in your album for you to look at and you move on to raising more foals. People also leave their foals with you to take care of them for a while. The better you do for such customers, the more Prestige you earn. Prestige is very important as it lets you unlock new items such as better treats, brushes, hoses and other equipment for taking care of your horse. Your foals’ stats such as hunger, thirst, cleanliness and experience need to be maintained well to keep them happy. For young foals you can feed them through bottles to take care of both their hunger and thirst but as they grow you need to give them food and drink separately. There are eight mini-games in all: feeding, drinking, cleaning, fence-jumping, lunge line training, teaching tricks, hay-making and filling water troughs. 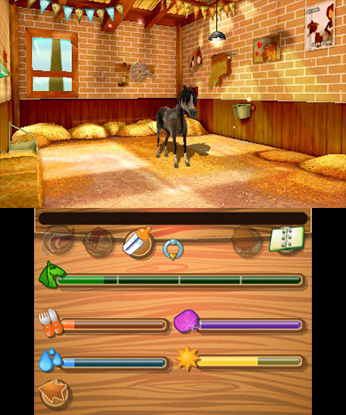 One of the most important things, though, is cuddling. In this respect the game is very similar to pet simulators such as Nintendogs + Cats. You call your horse to you, watch them on the upper screen and interact with them through their silhouette on the touch screen. Regular cuddling is essential to keep your horse happy.

The game brims with content. There is plenty of unlockable equipment for your horses, and 25 breeds to create foals from with hundreds of coats and plenty of stable interiors. In the content department, one can’t really complain. The mini-games make use of the touch screen and gyro sensor. There are two types of mini-games: the ones inside the stable and the ones that take place outside. The former are ones such as feeding, cleaning and filling water-troughs whereas you train your horse outside. The fence-jumping mini-game is one of the most enjoyable ones. Your horse runs around and as it nears a fence a prompt appears on the touch screen that you have to input correctly to let your horse jump the hurdle. The outside minigames increase your horse’s experience and happiness, and keep them fit.

The game’s other features and interactivity are great as well. You can use the AR Card that comes with your 3DS to take pictures of your tiny horse (through the 3DS camera) in your real world. There can also be beauty contests held between players having the game through StreetPass. (I wasn’t able to try the latter out by the way, not having any friend with a 3DS.)

The visuals are fine for the most part, but the horse models are up close somewhat jagged around the edges. The environments, especially the outside ones, look great, having plenty of detail (you can actually see butterflies flying around). The 3D effect is obviously very important in a game like this, but it turned out to be a glass-half-empty. While the pop-out effect with the 3D on was excellent, having the 3D on causes the frame rate to become choppy, making animations look less smooth and slower than they actually are. In the cleaning mini-game, the lather on your horse looks like lather for a while before turning into a pure white 2D texture that substitutes for lather. This may have been done in case the game was slowed down after your horse is fully lathered, but it still didn’t look very good. Apart from that the inside of the stables looks fine. The music was good and relaxing, but there were few horse sounds in the game. The game’s presentation from the wooden-board menus to the general calm of the farm is well done. 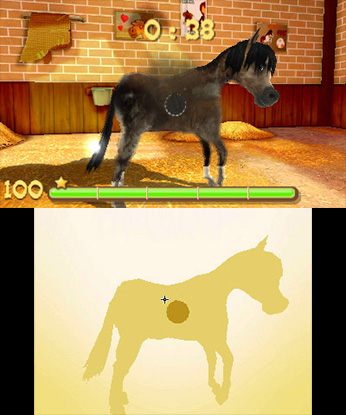 Let’s Ride: Best in Breed 3D is one of the best pet/horse simulators for the Nintendo 3DS so far, for people with tons of time themselves or who just want to keep their younger ones amused. The eShop version’s price has been halved from the retail version, making it even more worth it, but make sure that you like the genre and have lots of time before you start playing it because you’ll have to put in many, many hours to really enjoy this game.