Little Town Hero is Game Freak’s latest fatigue. While they are mainly known for that worldwide phenomenon known as Pokémon, during the course of their career they released a few different titles.

Little Town Hero is one of them. It’s labeled as a turn-based RPG, but it gets a lot of elements from puzzle and strategy games.

Axe’s village is the best place in the world. A peaceful, earthly paradise where everyone is nice and helpful. Too bad nobody can leave the village. Ever.

That’s the pact the inhabitants made with the royal family. In this way, they will receive protection against the outer world dangers. Except that now dangerous monsters are appearing in the village. Our courageous and energetic protagonist won’t sit on his hands and do nothing.

He, together with his friends, will fight to protect the village. 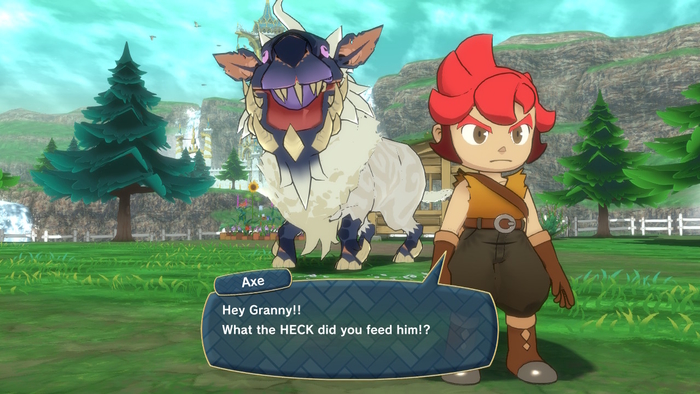 As always, Game Freak plays it safe and gives us a really simple plot. Sure, there are a few twist and turns, but they’re easily predictable.

Characters are simple and stereotypical. Ember is the fiery but fundamentally caring mom. Nelz is the clumsy and loyal childhood friend. Pasmina’s the preachy and responsible love interest. Matock is the annoying rival who challenges Axe to a duel more than Gary Oak. Any other character is fixed in their role and doesn’t change much. Still, the interactions between the main cast are always interesting to see and bring some funny moments.

Since the whole game is set into a single location, it’s no wonder the village life is the main point of the game. NPCs change their location and dialogue according to the player’s progress. Side quests give the possibility to know them more. Too bad that many of them appear as anonymous silhouettes.

They share the same sprites and have no name. This breaks the immersion a bit in an otherwise cozy and welcoming setting.

The game is divided into chapters and an autosave function is available. The player can also save whenever they want. Since every autosave doesn’t overwrite the previous one, it’s almost impossible to remain stuck in an unwinnable situation.

Axe can freely run around the village and talk to the residents or enter some plot-related building. That’s the kind of interaction the player can have with the game world. It isn’t much but it’s functional to the fast-paced nature of the game. 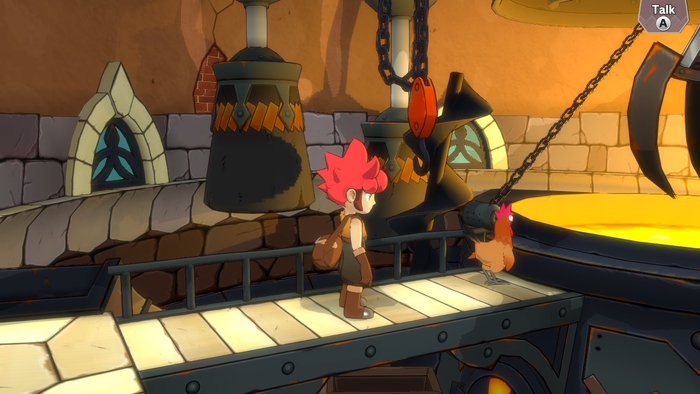 A fast travel option is available to reach the most important locations. This is a welcomed feature since Axe cannot run. Some of them are greyed out during specific plot events.

In the main menu, there is a Scrapbook option. It shows a 3D model and a description of every important character. The accompanying phrase changes over time so it’s worth checking it every now and then. There is a list of all the monsters Axe has fought during his adventure. Seeing how many spaces are empty in these databases gives the player an idea of their overall progress.

Battles represent the true focus of the game. Without them, the title would not last more than a couple of hours. There aren’t many of them since every single monster battle is long and unique.

The whole battle system is based on the concept of ‘Ideas’. Every action Axe can take appears in an inactive state known as Izzit. Upon activation, it becomes a Dazzit. Doing so consumes energy, which is limited. The protagonist will start with only three units of it, but they will increase by one every three turns. At the start of each turn, energy is replenished. The duration of a single turn isn’t fixed, but it will end as soon as the enemy has used up all of their actions.

Ideas come in three types. Red Ideas are combat-oriented and Axe can use it once per turn. Yellow Ideas are mainly defensive and their uses are unlimited. Finally, Blue ideas have miscellaneous effects.

Red and Yellow Dazzits have Attack and Defense values associated with them. So does enemies’ moves. When a Dazzit is used against the foe, the Attack values are subtracted from the Defense of each move. If the player’s Dazzit has a higher or equal attack to an opposing move’s defense, that move breaks, and vice versa.

Ideas come in a limited number but can be revived using BT, obtained with specific actions. Axe can only have five simultaneous Ideas. The player can see which are still available by accessing the Headspace during a battle, at the press of X.

Each Idea has special effects that are triggered upon either activation or use.

Only when all of the enemy’s moves are broken, Axe can damage its body with a Red Dazzit. If it isn’t available, Axe will receive a BP. Each contender has three Hearts and Guts Points to protect them. Guts decrease accordingly to the Dazzit’s Attack, while Hearts only by one unit no matter the power. Once a Heart is destroyed, Guts are restored and all Ideas revived. 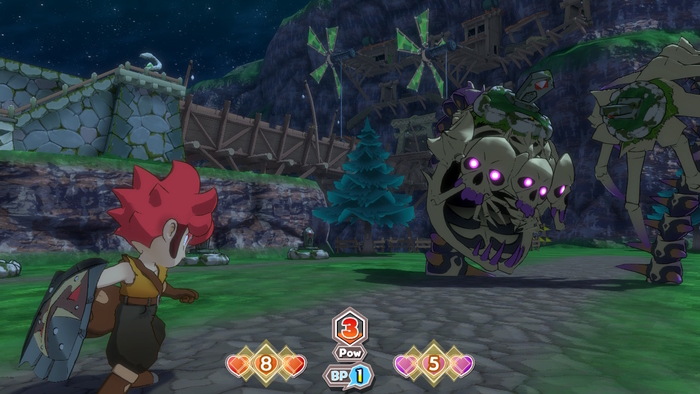 If Axe has his Ideas broken and cannot activate a new one, he will have to use Struggle. It’s a weak attack with only a 50% chance to hit. When Axe uses Struggle, his body will receive damage proportional to the opposing Attack value.

The player will receive Eureka Points upon winning a battle. It’s possible to upgrade Ideas and Guts with them. They represent the sole form of leveling up in the whole game.

The player can retry the battle or load a previous save in case of a Game Over. The Retry option comes with a few free Eureka Points and the chance to upgrade the protagonist with them. The game also gives a few hints about the battle.

The battlefield in which Axe fights is similar to a board game. After each turn, the game calculates a random number of steps Axe can move on the grid. Some squares come with special effects. Helpful characters can offer one-time actions. Axe can learn new Ideas that are only available for that battle. Gimmicks can be found in some squares. They are environmental elements triggered by an Idea. For example, Axe can throw a chicken at the enemies or fire a cannon.

This is a really vital feature for the outcome of the battle. Without them, it’s difficult to attack the enemies using only Axe’s Ideas.

That said, battles are heavily RNG-based. If the player is unlucky, they will get all energy-demanding Ideas at the start of the battle. This saps a lot of health and generally leads to an inevitable ‘game over’. A wrong roll of dice can bring Axe to the wrong location and ruin the plan. That’s a shame because there are many ways for the player to strategize their battles. Many successful attack combinations could be achieved. The more the player progress through the game and the more new options are available, battles seem to finally abandon their reliance on pure luck. Too bad that this happens just before the final boss. The final battle is, again, a pure matter of chance. A single wrong movement or an unlucky movement can ruin the whole encounter and force the player to restart the longest battle of the game. This leaves a bitter taste in the player’s mouth, just when the title could have ended gameplay-wise in a glorious way.

The art style is vibrant and colorful. Characters are simple but easily recognizable thanks to their expressive models. Enemies are especially well designed, with a lot of peculiar poses characterizing them. Having dynamic models is vital in a game so focused on battles, but at the same time, this prolongs the already drawn-out encounters. 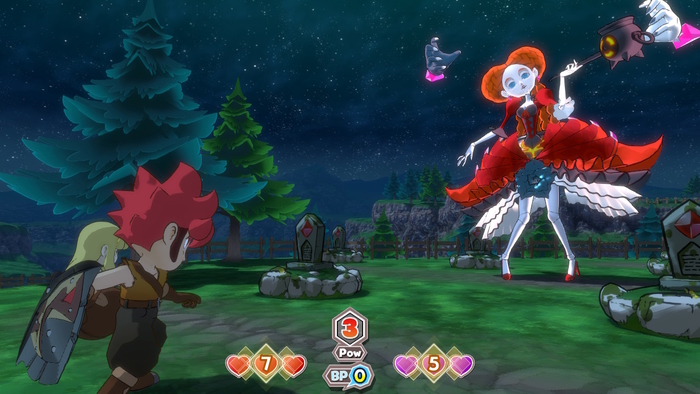 If sprites are presented in such a good way, the same cannot be said about the actual environments. In this regard, the game almost feels like a 3DS game with slightly polished graphics.

Music is courtesy of Toby Fox. It’s a shame it lacks the energy and charm of his previous works. That said, some tracks are still engaging and really set the battles’ atmosphere. It’s a soundtrack that won’t be remembered as a whole but works well in the game’s context.

The game is a one-time experience. It isn’t really long and won’t take more than 20 hours even to the most dedicated and completionist players. During the course of the story, Axe can engage in a few side quests. They’re all unique and complement well the game’s tone. They range from chasing chickens around to investigate a mysterious girl. Each side quest has a time range of completion and wouldn’t be available anymore after the time runs out. Therefore, it’s always a good thing to do them as soon as possible. Axe will receive Eureka Points as a reward upon completion.

The player can also reenact any battle fought during the game to receive more Eureka Points.

Little Town Hero’s battle system is incredible. It’s a really interesting take on the usual turn-based formula, but it does rely too much on RNG. The chance-focused approach is exciting and an accomplished prevision feels incredibly rewarding. Too bad that it also creates imbalance. The same battle can be a two-hour nightmare ending in misery or a twenty-minute breeze.

It’s a budget production and it shows. With more resources put in it could have been a great and innovative work. But in reality, it’s only a fun experience that requires patience and, more importantly, a great dose of luck.