Lord of Magna: Maiden Heaven is quite the coda for Neverland, its original developer that went defunct in 2013 and left the game’s development incomplete until Marvelous finished it. It’s not the kind of sweeping epic we’ll be talking about fifteen years from now, but it’s a charming adventure while it lasts and RPG fans will be inclined to play through it more than once.

The main character is an innkeeper, Luchs (you can change the name), whose father has made him promise to take care of the inn they’ve had for generations and to treat his guests like family. Unfortunately for Luchs, no guests show up for him to treat like family, business is bad and he takes to selling crystals he digs up from caves with his best friend Bart’s help. One day he goes spelunking after an earthquake, finds a fairy in a crystal who’s lost her memory and his normal life mutates into one of finding the fairy’s other sisters, fighting off fiends with them and helping them discover how come they sauntered into his life.

The story is pretty simple. Luchs does his best to honour his promise to his father, his childhood friend Amelia worries that he’s becoming too attached to the fairies, the fairies have distinct personalities of their own (all rather genial) and Bart is Luchs’s barmy-yet-loyal friend who comes up with the idea of the fairies becoming maids at the inn. There’s lots of humour in the game, even apart from the characters’ interactions. For example, if you press Start before Luchs is done saying the game’s title at the title screen, you’ll hear him say, “Uh… I hadn’t finished saying the title yet,” and the description of locked extras is, “What is it? I can’t wait to find out!”

The battle gameplay bears a slight resemblance to the Valkyria Chronicles games. Each of your characters can move in a limited area and use AP for actions such as attacking, using skills and guarding. Every character has different abilities that makes them unique (for example, Beatrix is great for ranged attacks with her bow gun while Charlotte’s attacks have a relatively large area of effect). Elements also have a role – fairies can have affinity for Flame, Frost, Heaven or Earth while Luchs can is the only one with Void affinity which allows him to use skills from all elements. Actual gameplay is not very challenging; as long as you don’t neglect characters’ health bars, there isn’t much to fear.

There’s an interesting combo system in Maiden Heaven. Enemies can be bowled over to collide into other enemies, damaging them as well – the more enemies one hits, the higher the combo. For combos of 10 or more, your character gets an extra turn. It’s fun linining up your shot for a big combo and watching the wind-up bears or assorted wacky enemies knock each other over like skittles.
You can talk to the girls between battles to initiate Heart events and strengthen the bonds between them and you. This also leads to alternate endings depending on which one has her final Heart event completed. With the exception of baby pandas, is there anything cuter than chibis? Even the word chibi is cute. Maiden Heaven has a chibi art-style. The character models look cute if lacking in detail. The character art during dialogues, though, is excellent – there are even animations for the portraits while they talk. The environments are mostly pre-rendered and look fine; the enemies have some interesting designs (see ‘wind-up bears’). There are short anime cutscenes at some points and they work well.

The game’s music is a little too retro-RPG at some points (usually the story events) and absolutely brilliant at others (usually during the battles). In some cases I’d keep my characters still for a while to listen to the upbeat tunes. The English voice cast has done a great job, although most of the dialogue just has the first few words spoken – it is an RPG, after all, so prepare to do a lot of reading. 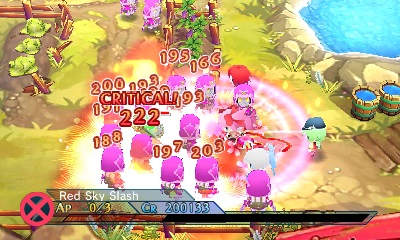 Maiden Heaven isn’t a lengthy game, although the multiple endings are a good incentive to play through it again. Hardcore and casual RPG fans alike can enjoy it for its fun battles and charming story, and it has few setbacks. If you’re into tactical RPGs, this one won’t disappoint.