As we all know, in Magikarp Jump there’s a small chance for a random event to happen after completing certain actions, such as doing a training session or winning in a league match. However there’s a set of secret events, numbers 35 through 40, that only happen after completing specific actions. Additionally, they can only be activated once. These events bring positive effects for the most part, but others on the other hand… let’s just say I hope you weren’t very fond of your Magikarp. 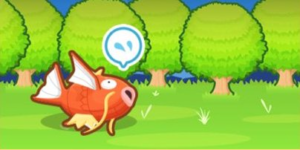 The way to active this event is very particular: you have to tap on the TV that is sitting at the edge on Magikarp’s pond, and once asked if you want to leave the app you have to select “Cancel”. You have to do this process a total of seven times and you should notice that now the TV shows static. In order to fix it, you have to select the TV and cancel another 7 times. With this done, the event will trigger the next time you finish a training session.

In it, you and your Magikarp will come across a ghost girl. You can choose to stay as many times as you as you want, but the only way to end the event is by leaving. Going through this experience will make your Magikarp’s max level increase by 1. 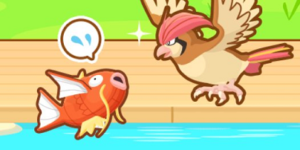 This is probably one of the easiest events to trigger. All you have to do make Magikarp swim up to the surface of the pond. You can tap on Magikarp to make it do a little jump, keep doing this and eventually a Pidgeotto will come down. It’ll fly away for a few seconds, but if you keep making Magikarp jump, Pidgeotto come back and snatch Magikarp mid-jump! You will lose Magikarp in the process and will be forced to fish up a new one. 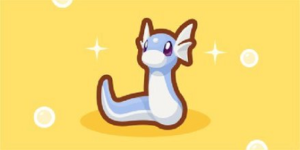 Roddy Tackle has a pond full of some fine Magikarp, doesn’t he? Well, what would you say if I told you that there’s others things living in there? Because there is. This event is not cheap to activate, in fact, it’s the only event that requires you to spend in-game currency. I don’t recommend going for it unless you own the Diamond Miner (obtained after purchasing 2,500 Diamonds using real money).

The only time you can active this event is when fishing up a new Magikarp. Once you’ve reeled in a Magikarp, you must select the option to fish for another one immediately, which costs 10 Diamonds. Once you’ve fished up your second Magikarp, you have to pass on it as well and fish for another one, but there’s a catch: it now costs 50 Diamonds instead of 10. Keep repeating this, and on your fifth time fishing, you’ll obtain a Dratini! However, Dratini can’t participate in the league. Roddy Tackle will come a take it away from you. You’ll get a Skill Restore from Dratini. In total, you have to spend a whopping 210 Diamonds to see this event. 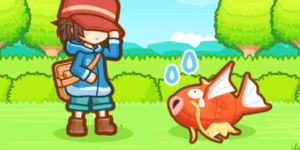 This is a fairly simple one. Just lose 3 league matches in a row. The Man of Mystery will appear after your third loss and will try to cheer you up. He’ll gift you with 3 LP Restores. 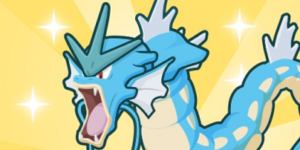 Have you wondered why your Magikarp don’t evolve into Gyarados despite going past Lv.20? Well, that’s because all Magikarp come equipped with an Everstone by default.

If you want to trigger this event, first you have to be at least Rank 10 when fishing up a Magikarp, this is because the max level you can train Magikarp up to is equal to your Rank, plus 10. Once you get a Magikarp with a max level of at least 20, tap repeatedly on it while it’s swimming underwater. Eventually you will get a message informing you that Magikarp’s Everstone broke. When Magikarp reaches Lv.20, it will evolve into Gyarados! Unfortunately, Gyarados isn’t allowed to participate in league matches. Mayor Karp will come visit and take care of Gyarados, and you’ll be forced to fish up a new Magikarp. 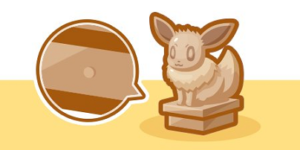 This is a new event added in version 1.2.0. It’s a fairly simple one. In order to activate it, you must first go to your Event Dex and check the hint for Event 40, which only says “Let’s Push It!”. Now all you have to do is go to the Diamond Shop, and inside the Decorations section, tap on the Bronze Eevee Statue image. You’ll find a secret button, push it and you’ll receive a free Skill Restore

A lifetime Nintendo fan. Currently majoring in System Engineering and being addicted to Pokémon, Splatoon and Nintendo mobile games.