The ‘Disable the Barrier’ quest requires that you defeat 4 guardian demons and 3 powerful demons. You will be required to defeat the last 3 demons without saving your game, therefore you need to prepare beforehand if you’re unable to defeat them all in a row.

Recommended gear to have before entering the last shrine :

Armor that has resistance to physical and ice skills. Avoid armor that has weaknesses to gun, ice and physical skills because your enemies will use them. In addition, you may need the Energy Drain skill or MP recovering items.

Marishiten is the final guardian you will battle for the ‘Disable the Barrier’ quest. Unfortunately, you will be required to battle two other powerful demons before having the ability to save. 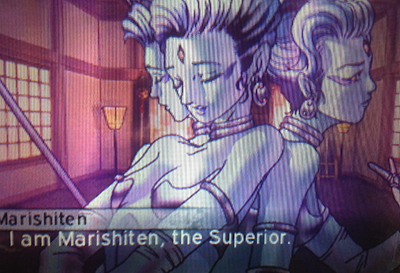 She blocks fire skills and has resistance to light skills.

Be careful not to use magic skills when she uses her magic repelling skill known as Makarakarn. She also has a weak almighty skill which she uses regularly if you use either Tetrakarn or Makarakarn. Other than that, she also uses a gun skill.

Inanna is one of the demons that you will face after defeating Marishiten (the last guardian demon protecting the jars). She does not have any weaknesses and she uses the almighty attack, Megidola, which does heavy damage to all foes. 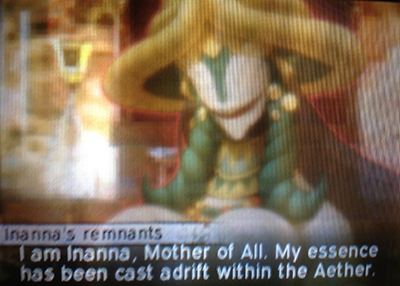 She will not be difficult to defeat since her power has not been fully restored.

Maitreya is the last demon you will face before completing the quest. 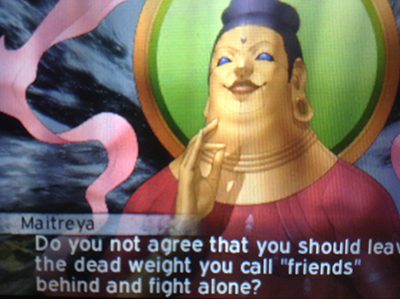 He blocks light skills and has resistance against ice, dark and physical skills. His weaknesses are fire and gun skills, however, if he uses his Enlightenment skill, DO NOT use them as he will end your turns and absorb your attacks as HP.

Thankfully, he isn’t that difficult to defeat.

Make sure your protagonist and demons have revive and healing skills because he did knock out over half my team with Billion Hands after getting a smirk from my mistake of taking advantage of his weakness while his Enlightenment skill was active.

Armor that protects you from physical and/or ice skills is recommended to equip.

During the battle, he will ask you a question :

What are you fighting for after being branded as a traitor from the people of Tokyo?

You will have three choices to choose from :

Early in the battle, he might not do as much damage, however, do not underestimate him. A smirk cancelling skill might be beneficial as well since his Billion Hands skill has the chance of eliminating your entire party after a smirk.