Marco & The Galaxy Dragon wasn’t on my radar when it was initially released this past Spring. However, it was available for review at a time when I was craving a good visual novel. Sadly, this one didn’t hit the spot, failing to capture my attention in a good way. Will it resonate with you? Please let me try and help you make an informed choice in a spoiler-free way.

As a visual novel, you know how important the story is to the proceedings. You also know how subjective such a thing is. One person’s trashy plot is another person’s treasured plot. The opening of this one starts dark and gritty, in the way only a creepy clown holding a gun to someone’s head can. But, it quickly changes tones to something cartoony before bouncing back and forth with blood and plenty of cursing. Some will appreciate the anime style contrasts, but I found it jarring.

You play as Marco (don’t let the name fool you, she’s a girl), a teenage treasure hunter. Accompanied by her dragon friend, Arco, she’s searching for her mother, who was part of the aforementioned dark opening. I didn’t feel particularly invested in the main characters, partly because I feel like I’ve seen them before. Allow me to illustrate by describing this tale…

In this sci-fi adventure, a kid is separated from their mom at a young age. Fast forward years later, and they’re a treasure hunter. They steal a stone (that humans can’t touch) but betray their boss by not delivering it. Later, they team up with an ally who has vowed revenge for the baddie destroying their home and escape from jail. Meanwhile, said baddie sits on a throne, yelling at his daughter, who secretly wants him dead. I can go on, but what came to your mind? Guardians of the Galaxy, perhaps? Heck, there’s even an arm loss in MCU fashion. 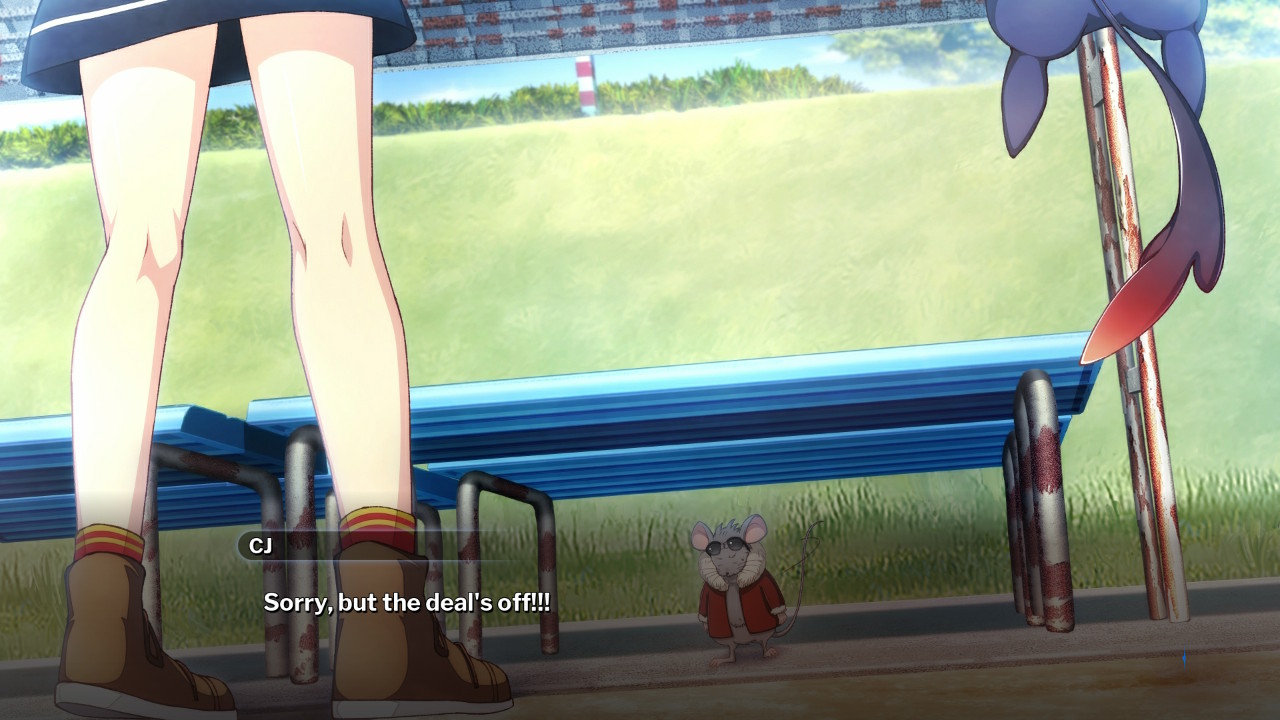 I don’t mean to imply that Marco & The Galaxy Dragon doesn’t have its own ideas amidst its attempt to emulate superhero and anime tropes. It’s just they don’t get satisfactorily for me. The title, while occasionally amusing, never made me laugh audibly with its juvenile trivialities. Some are eye-rolling—jokes about copulation—and they undercut rather than refresh against the melodrama. With comedy such a sizable focus, I wish it was…well, more focused.

I mentioned the main cast in my opening paragraph under the Story heading, but Marco & The Galaxy Dragon has numerous supporting characters too. Possibly too numerous as it tries to juggle many that wind up feeling underdeveloped. In fact, I could only recall two without consulting screenshots. Your pig companion (emergency rations), and the dentist who flashes a ton of skin.

It’s a lot to follow all these characters packed in. Being secondary, of more minor consequence, they can drag down the plot rather than balance the overall pace. Unfortunately, the writing style just doesn’t lend itself to a great deal of character development.

I asked myself who Marco & The Galaxy Dragon was made for, and it seems it’s a young teenage audience. The title is too adult for children with blood and strong language. While I didn’t find partial nudity as listed in the ESRB description, busts are ample. Meanwhile, it’s too childish for adults, with some of the comedy examples I mentioned early serving as just one type of illustration. So it’s one of the more niche VNs I’ve experienced, and I maintain it’s for young teens (likely male) with attention spans on the shorter side.

Why do I suggest shorter attention spans? Mainly because there’s a constant barrage of things happening. While this ensures stimulation and leaves you genuinely wondering what will happen next, it also leaves you struggling to recall the actual story. An example of this is when I had to pause and ask myself a couple of hours in, “What’s going on?” The overall pacing is too fast, making Marco & The Galaxy Dragon feel like a title full of ideas that it doesn’t know what to do with. Stitching them together higgledy-piggledy simply didn’t work for me.

I’d illustrate it like an all-you-can-eat gaming buffet; what would happen if you try one of everything? You’d get drowsy. I apologize for the food analogy. I also admit that, yes, my eyelids did feel heavy at points while viewing Marco & The Galaxy Dragon.

As a VN, there’s no actual gameplay to speak of. You read, and you click, and you repeat the process over and over. Or have it on auto if you don’t want to tap a button or if it stops recognizing your clicks as it did for me once. Easy peasy, but worth mentioning for someone who never played one of these titles and was drawn to it by screenshots. What about choices that are pretty common among VNs? I saw one during the entire time that served only as fan service eye candy. If you’re used to visual novel games with lots of decisions, Marco & The Galaxy Dragon will be a bit of a letdown.

What puts the visuals in this visual novel? First, allow me to crib from the title description on its Nintendo page. “Approx. 1000 images and stills! There won’t even be time to take a breath between the changes in scenes! Thus making the dramatic developments in the story unlike anything seen in previous visual novels!” With all those exclamation points, your expectations may be high. Lower them cause the title looks… fine. Many of the stills, though attractive enough, look on the generic side, like they could be from any visual novel. And the constant changes ensure the pacing issues I had with the plot carry over into the visuals.

The “multiple cartoon-style animation scenes,” meanwhile, are more fun to watch. But, like the tone, I found them a bit jarring since the style is so different. Still, there’s just enough of them spread out that you want to see what’s next. You unlock each scene in Cartoon Mode, an extra that allows you to view them at your leisure, which is a touch I appreciated.

Marco & The Galaxy Dragon has a soundtrack that’s all over the map. But given the changing tone and fast pace nature of the title, perhaps it fits in its own weird way. Where else can you hear vocal recordings, NES-style music, Raffi, and The Nutcracker all in the same title?

A sound mode in the extras lets you listen to all tunes, and you can also tweak their volume alongside the sound effects and voice settings. It’s an eclectic mix for sure (with plenty of silent stretches also sprinkled in). Still, my complaints are ultimately minimal when it comes to the tunes. With over 30 tracks, you’re bound to find some you like.

While I can’t say it’s boring, Marco & The Galaxy Dragon misses the mark too much for me with a sloppy story, characters in excess, awkward pacing, and more. It’s also $19.99, and for a visual novel with no decisions or choices and ultimately no real replay value, that’s a tough sell. Those curious can download the demo. Maybe you’re part of this title’s niche audience that I’m not, and it’ll leave a more favorable impression as a Guardians of the Galaxy-ish anime. Either way, I’d wait for a substantial discount.

Nintendo has hooked Trevor as a child with the NES and hasn't stopped since. When he's not playing on his Switch, 3DS, or retro hardware, he's probably chatting with indie developers or doing the occasional freelance writing gig.