Over the past 2 decades, the Mario Kart series brought together gamers of all ages to races full of low blows and crazy shortcuts. This seventh episode was obviously no exception to this rule, with the multiplayer being more developed than ever, and Nintendo proving once again that they remain the undisputed and indisputable master of the genre .

Since the game was released in 1992, each new episode of the series brought some novelty to the gameplay, as a way to have their own identity, and also improve the gamers’ enjoyment. If you watched the trailer, you’ll know that Mario Kart 7 pushed this to the limit, with the most notable additions being the gliding and underwater passages. If driving underwater is not exactly an original concept, it remains a good improvement to the series. Most of those that played the game would however agree on the fact that the gliding is undoubtedly the only true innovation brought in Mario Kart 7. 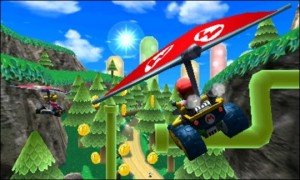 The gliding’s principle is quite simple. Upon rising up from a springboard, the sail will automatically open up, allowing racers to hover over long distances. Moreover, they can still control their kart, being able to change direction in mid-flight, or to lengthen or shorten their airtime according to their movements. However, as you must have guessed, it is impossible to fly to infinitely. Gliding can however be greatly useful to avoid some pitfalls and obstacles. Thus, it is not surprising that most of the tracks take advantage of this new feature, making the results of races more fun, interesting, and unpredictable. Additionally, while being no novelty to the series, the countless mini shortcuts, allowing racers to gain a few precious seconds whether on the ground, in the air or underwater, are nonetheless part of the game’s identity, and one of its best elements.

Despite all the above, the most interesting improvement found in Mario Kart 7 is in the tracks themselves. Nintendo seems to have learned from their mistakes, and got rid of the messy tracks that were most notably noticed in Mario Kart Wii, making following the right path a feat in itself. In Mario Kart 7, the path ahead is clear and pleasant, giving off a feel that the circuits have been crafted to be perfectly optimized and fun. And worry not, while being simple compared to the Wii episode, the tracks in Mario Kart 7 still managed to add a great deal of sophistication to the series. 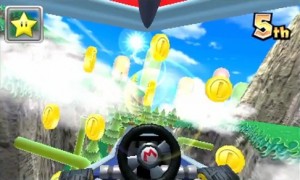 Also in the mix of elements that make their return, the coins have a great presence in Mario Kart 7. They allowing the karts to go faster depending on the number of coins they have, keeping in mind that each racer is limited to 10 coins. It is also good to know that racers will lose 3 coins whenever they run into certain obstacles or get hit by shells and other objects. Fortunately, the coins are positioned well enough to allow every player to benefit from them, an aspect that is even more useful considering that they reappear in each round. If you are however unlucky enough to miss out on the coins, there is still hope for you. If you are a regular of the series, you’ll know that the items play a great role in affecting the results of a race, with shells, banana peels, stars, and many others. Those who have been complaining about the lack of difficulty in the Grand Prix and other single player modes will remain disappointed: Mario Kart 7 is the easiest episode of the series. Completing the eight cups in 50cc, 100cc and 150cc is a breeze, with the mirror cups unlocked later on being only slightly more difficult. This is mostly due to the fact that the tracks have been simplified, and the speed lowered. 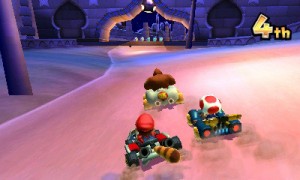 If this habit Nintendo has of making their games more accessible to all ages is nothing new, their lack of risk-taking policies for Mario Kart 7 was however surprising. Indeed, if new and interesting features have been added, we can’t say as much for the gaming modes. The Grand Prix, the Time Trials, the Coin Runners and the Balloon Battle is all we get. In fact, some of these modes have have earned some restrictions. In the Balloon Battle for example, the customization has been pretty much eliminated. If in the first games we could choose to play on a scoring system or on a basis of opponent elimination, we now only have the former.

But make no mistake, this does not mean that Mario Kart 7 is not an enjoyable game. Its greatest asset, the online multiplayer, effectively makes up for all the flaws of the single player modes. The lack of lags in this opus perfect fluidity. Loading times have also been greatly improved, and connecting to races is no longer an ordeal. Another noteworthy feature added to the online multiplayer is the possibility of creating a community of racers with no membership limitations, where mini-tournaments can be organised. Finally, those that do not like playing online have not been neglected. Local multiplayer modes allow up to 8 players to play against each other with a single cartridge through the Download Play feature.

As you will understand, despite an obvious lack of ambition and easy solo modes, Mario Kart 7 does not disappoint. With Mario Kart 7, Nintendo seems to have found the perfect balance between technical races and fun, with 16 exclusive tracks created for the occasion, and 16 classic ones being revived. If you can get over the disappointments of the solo modes and learn simply enjoy the new features and online multiplayer, Mario Kart 7 is definitely a game that may justify the purchase of a 3DS!