The Mario Kart series, originating with Super Mario Kart for the SNES, was designed to be a slower F-Zero with items you collect and throw at other racers to make it more fun. Now Mario Kart 8 and its later port, Mario Kart 8 Deluxe, seem to have bridged the gap between a fun experience and an in depth fast-paced race to the finish that fans young and old can enjoy.

Starting the game up, you can use Amiibo to give your Mii racers added costumes from other 1st party titles as well as Mega Man and Sonic. There’s also a section where you can read up on the info about the battle mode objectives, learn what items you can use if you aren’t familiar with the series, and the most important, know all the techniques you need to help you beat friends. Most of them are from previous, more recent Kart games but one of them really sticks out. We’ll get to that one later.

So when you start the single player modes you’ll notice, unlike Mario Kart 8 for the Wii U, that all the characters are unlocked. There is a total of 42 racers to choose from to please anyone and to get them into the game including alternate skins for Link, the Inklings, Yoshis, and Shy Guys. Not bad. But if you truly want the tools to win, you need karts and bikes. They did take out the differences between the two from the Wii version but in this game there are multiple ways to customize your stats instead of just picking a character and kart. Similar to Mario Kart 7, you can pick a chassis, wheels, and a glider, as well as a character (most of the characters though they look like they are the same size have different stats). You can view the stats by pressing the Start/Plus button when picking kart parts. 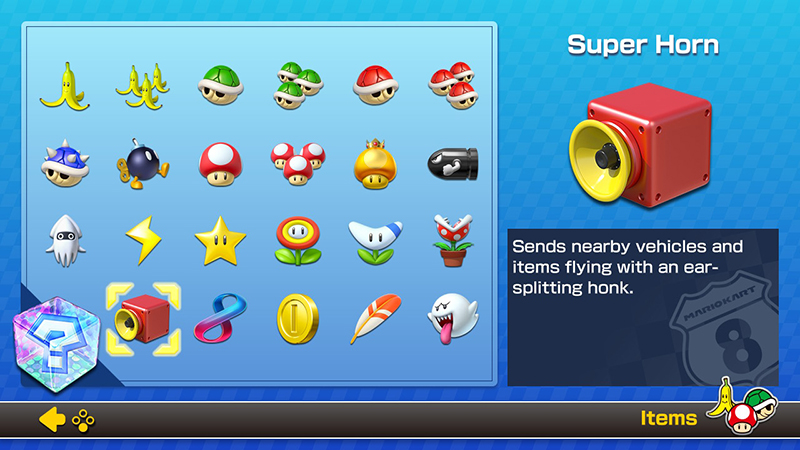 Now you can pick from 1 of 12 Cups each consisting of 4 tracks from the start as well for a total of 60 tracks to master. Does this sound like too much? Almost half of these tracks are redesigned older tracks from previous titles while the rest are all new unless you think that MK8 for the Wii U and its DLC are old. Note that these two games are very much alike besides controllers, a Gamepad screen, and all the DLC from the Wii U one is already installed in Deluxe. The difficulties range from incompetent to manageable up until you get to 200cc, an exclusive for 8.

Playing 150cc feels a lot like Mario Kart 7 aside some minor differences because they don’t share the same karts, you can’t turn as tightly, the camera tilts, item variety and those things. Then when you get to 200cc, it’s a serious racing game and you may as well play with a lighter weight class, like as serious as F-Zero or F-1 Race with some minor features like coins and hazards and this is where the added feature Drift Brake comes along. You can’t just floor it and expect to win. You need to have what it takes to be a professional driver, which is pretty tough when you need to hold 3 buttons with your right hand. Luckily you don’t need gold stars in 200cc to get the secret unlockable or beat the 200cc expert ghosts but if you want to that will take you so long you won’t need to wait for the next games to come out. 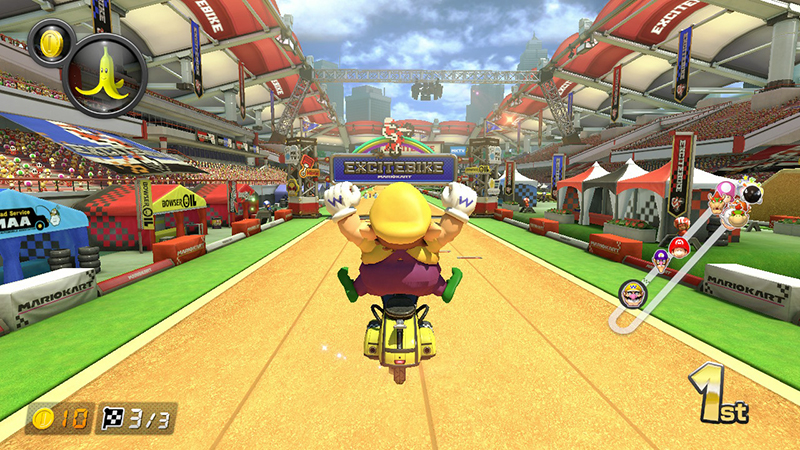 As for what you unlock you can get standard parts by collecting coins while racing and this time it takes less coins to unlock stuff than in MK8 not on the Switch, as well as gold parts far acing mirrored and regular 150cc or just collecting a lot of coins which is a nice quality of life change so I can get to other Switch games.

The Battle and VS. Modes are there just for fun and if you aren’t good at racing, you can just play battle modes which are heavily item based and the tracks aren’t as diverse but they do have all the previous modes from all the older Kart titles as well as Renegade Roundup, which is sort of like capture the flag but Mario Kart flair and there’s no arguing over who tagged who.

The online play isn’t the best if you lack friends with the game because you can only choose from a random selection of 3 automatically-selected tracks. You can also make arenas and join people you’ve raced with before like in MK7, however, two players can now play from the same Switch – during a race, things can look like a mess so good luck trying to hit people with your green shell.

Local play is a different story. You can use Gamecube controllers (you may need an adapter if you use the old plug-ins/Wavebird), Pro controllers, two Joy Cons or one Joy Con per player, which isn’t bad but it really helps with the strap for each controller if you go that route so be sure to bring them if you are going on a trip. It’s not too technical compared to other games so I don’t see why you would have a hard time with it. You can do everything in single player as you can with more than one player besides time trials which are limited to single player.

Overall, this game offers a lot of variety and challenge to those into competitive games and it also compliments other franchises including the DLC tracks exclusively tailored to fans of other Nintendo games/franchises. It does lack a stage/racetrack creation feature that other people have hacked into other older titles but since we haven’t seen that before from Nintendo I’m not going to count it against them. It does well explaining the controls in the pause menu and techniques in the select menu, and the music compliments the Mario series. If you are looking into a game to get into to start your Switch collection or like Mario Kart in general, this is one of the better ones but if you own the Wii U version, you can pass this one up because the DLC for the most part can be picked up from MyNintendo and the games won’t play any differently.