Although Mario Kart 8 unfortunately lacks a traditional story mode, it does feature Grand Prix’s. For those of you who don’t know, a Grand Prix is 4 races condensed into a “cup”, and Mario Kart 8 features 8 of them as well as 4 different difficulties to experience them on.
Mario Kart 8 has incredible gameplay to veterans and newcomers alike. It pulls off being simple enough for new players to understand and be decent enough, while also being complex enough for veteran players to have a fun time learning new tricks to set themselves ever so slightly above the competition.

Battle Mode. We all love Battle Mode, right? Well…maybe not in Mario Kart 8. Nintendo was extremely lazy as they didn’t even create battle-specific arenas; they instead reused actual race tracks. This is fine in theory but when you try to place with under 4 people it becomes very difficult to find anyone on the track. Hopefully DLC Battle Arenas will be added in the future, but for now it’s a mess of the mode that used to be one of Mario Karts highlights. 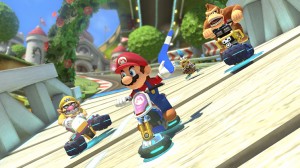 The controls are incredibly simple as well; the A button (or right stick, if you’d prefer) are your gas button, the R button allows you to drift around corners, and X allows you to look back behind you so you can look at all your opponents. To the games dismay the Wii U Gamepad adds absolutely nothing. Yes, you can see a map, but having to look all the way down just to check where the opponent is and what items said opponents have is more of a hindrance than a help. Using the Gamepad also allows you to play the game through just the Gamepad screen, which of course is a welcome addition to any game although it doesn’t add anything substantial.

Mario Kart 8 is darn right beautiful. Although the game doesn’t run at true 60 frames per-second (the average is 59, actually), the game does run at 720p which looks great. The game also runs at 59 frames per-second while playing local split-screen, but sadly only runs at 30 frames per-second while playing with 3-4 players locally. The amount of detail found within the game is incredible as well; I find something new almost every time I play. For example, in Sunshine Airport, you can hear flights being called out if you wait sitting long enough. This is something you’d likely not notice while actually racing and just shows how much detail Nintendo really put into the game. Did I mention the flights called off are actual tracks in the game? It doesn’t add much to the common eye but for Mario Kart fanatics it’s an incredible detail that deserves recognition.

The soundtrack is absolutely astounding. Each track is completely orchestrated; a first for the franchise, which sounds simply amazing. Each song fits each track like a glove, which sadly is hard to say about a lot of games and their respective soundtracks these days. 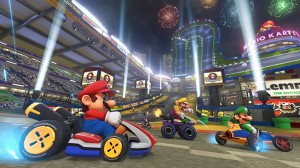 For those of you who don’t know, Mario Kart 8 also features online connectivity allowing you to host your own tournaments, race with friends, or even race worldwide if you’d like. This adds an incredible amount of replay value, although currently (before any patch or updates), the online is broken. Currently if you’re racing in a worldwide and someone happens to disconnect before choosing a course, you’ll likely receive an error. This is just a flat out mistake on Nintendo’s part as people leaving lobbies is one of the most common thing in just about every online multiplayer game.

The game features unlockable kart parts, consisting of body/wheels/glider. This adds a good amount of grinding for coins (collected in races) which isn’t a good thing. If you play the game online a lot you’ll unlock everything eventually, however if you’re a casual player that plays locally and just want to scratch you’re completionist itch, it can be an extremely long process that isn’t able to be avoided.

Mario Kart 8 offers an extremely well put together kart-racing experience you can’t find anywhere else. The graphics and details are beautiful and fluid, the soundtrack is incredibly well orchestrated and the replay value is good for those willing to bypass its online connection issues and disappointing Battle Mode. Mario Kart 8 is a must own title for any Wii U owner, even at the $59.99 price tag.