Mario Party 10 is the latest installment to the Mario Party series which has been a staple for gamer parties, though sometimes it can ruin friendships. Trust me, I know. 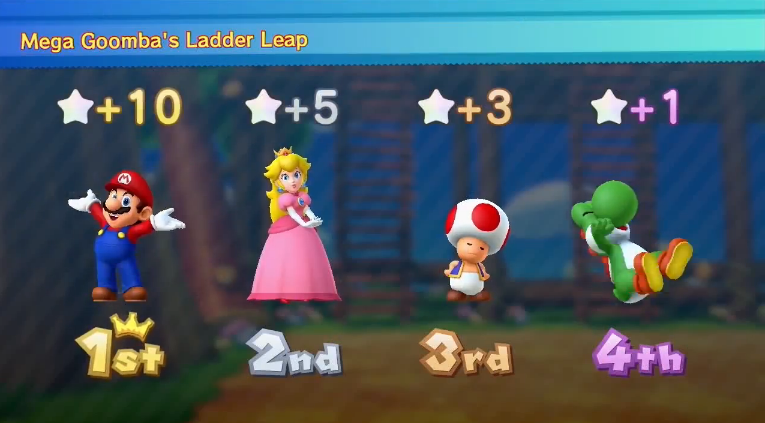 The games have always been great overall, but the best part for me has to be the mini-games, and I’m pretty sure that most of you will agree, seeing as they are one of the most polished parts in the series, along with graphics. Well that’s enough of that, let’s get to Mario Party 10 and it’s new features.

First, let’s start with the Mario Party mode. You, with 3 other players take turns being the “captain” of the vehicle, or rolling the dice. After all players rolled the dice in a round, you and the other players compete in a mini-game. The winner of the mini-game earns Mini-Stars, a returning feature from Mario Party 9. You and the other players have to try to get to the end of the course with the most Mini-Stars. However, there is Bowser and Bowser Jr. to worry about; after all, they can make you lose Mini-Stars and make you lose the game just by landing on their spaces. A brand new feature in this mode is that Bowser is locked in the Gamepad with dice numbers. Each time the die is rolled, the corresponding lock will be unlocked (there are six locks, one for each number on the die). The player who unlocks the last lock loses half of their Mini-Stars and Bowser will add a lot of Bowser spaces on the board. If Bowser isn’t free until the “Almost There” event, he will remain stuck there and Bowser Jr. will add Bowser Jr. Spaces instead. Also, item shops return, this time in the form of Toad Houses, giving a dice block to all players. All players are required to use Wiimotes. Overall, it’s a great mode, but almost completely borrowed from Mario Party 9. 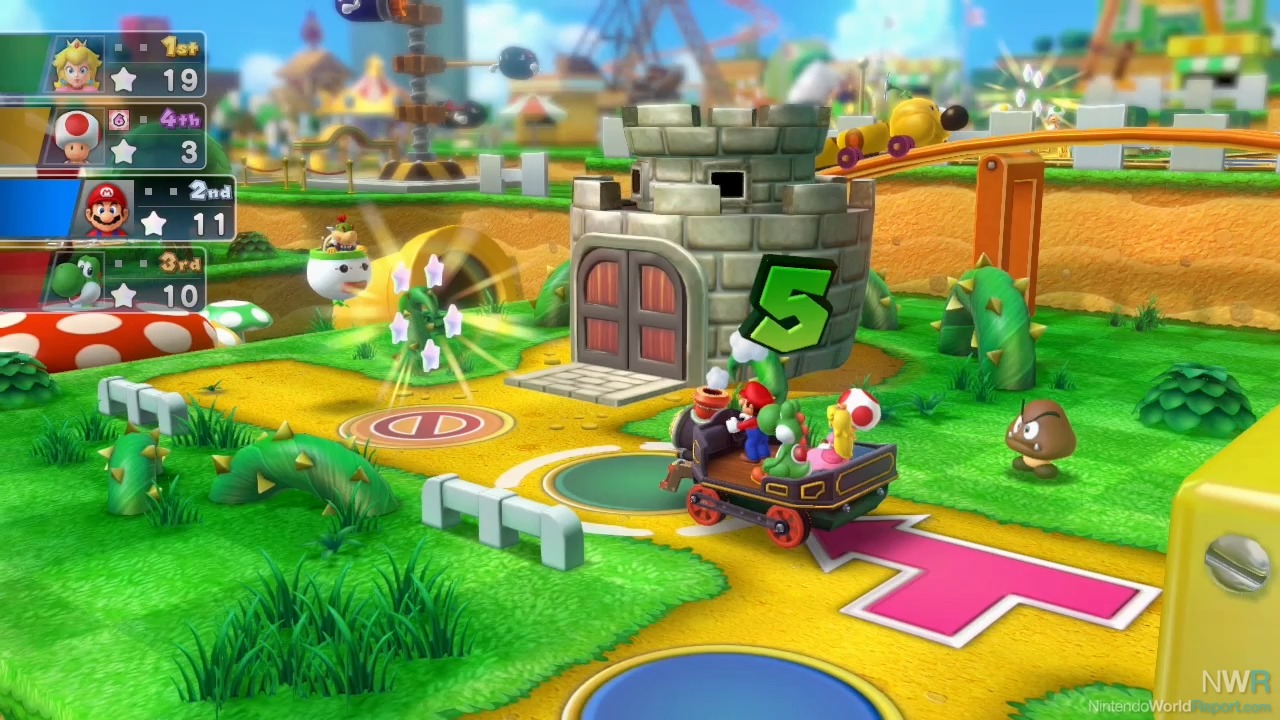 Next, what I think is the biggest addition: Bowser Party. I know that a lot of you guys have loved and hated Bowser for what he does in the series, seeing as he can help the person who’s in last place but hurt the person who’s in first place in the process, but I’ve always wondered how it would feel to play as Bowser and this game delivers. The premise is that 4 players, using the Wiimote, try to get to the end of the course before Bowser, the player using the Gamepad, catches up to them and puts them through mini-games called “Bowser Battles” and makes them lose all their hearts, a new feature exclusive to Bowser Party that replaces Mini-Stars. These mini-games were great, using the Gamepad’s microphone, accelerometer and touch-screen capabilities to immerse you into them. These mini-games can also be played by themselves in Bonus Games or in Bowser Challenge. Overall, this mode was a great addition, and is a great example of asymmetric gameplay. 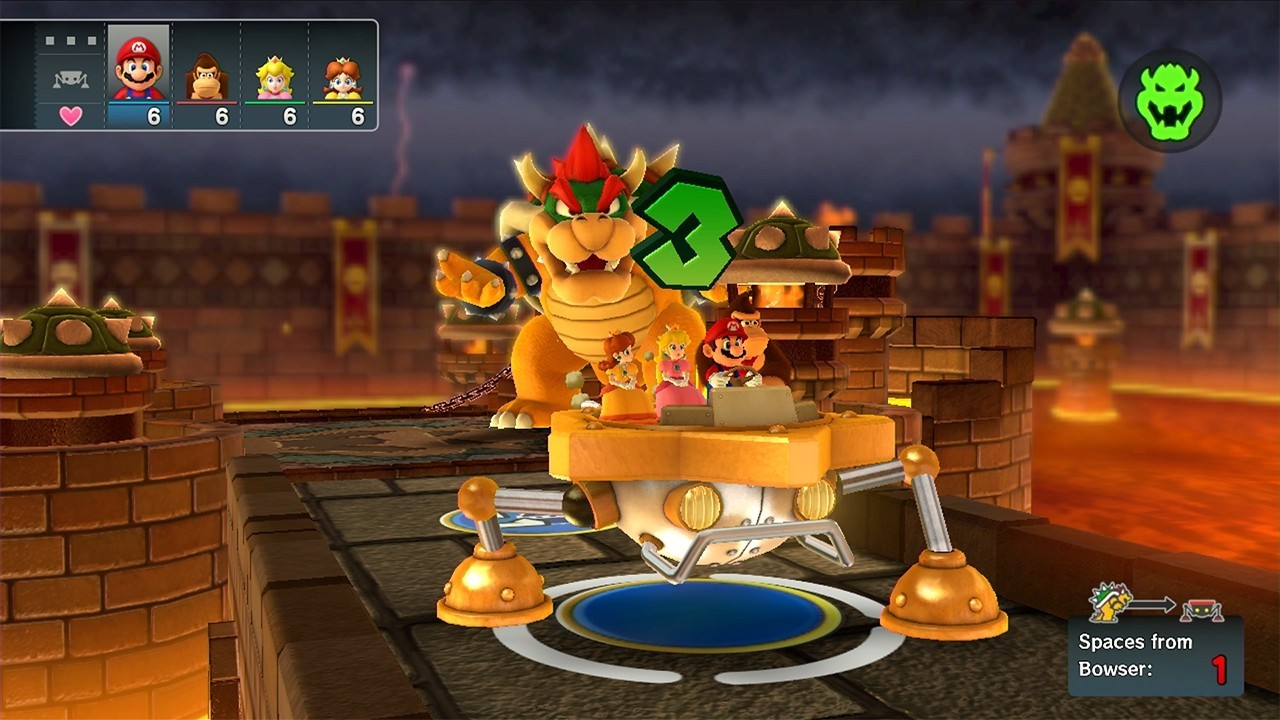 Next, amiibo Party. If you bought the Mario Party 10 bundle with amiibo, then this mode should be available once you scan the amiibo. But if you don’t have an amiibo from the Mario franchise, this mode wouldn’t be available for you. This mode has gameplay similar to the Mario Party games before the ninth one, but you can change the parts of the board to the ones based on the amiibo Mario character you scanned. It has fun mini-games and you can play with up to 4 different amiibo Mario figurines. You can also scan all your amiibos for bonuses (which is a different mode altogether), but each one can be scanned only once a day. Overall, a good addition, but easily forgettable if not only because it’s in the main menu. 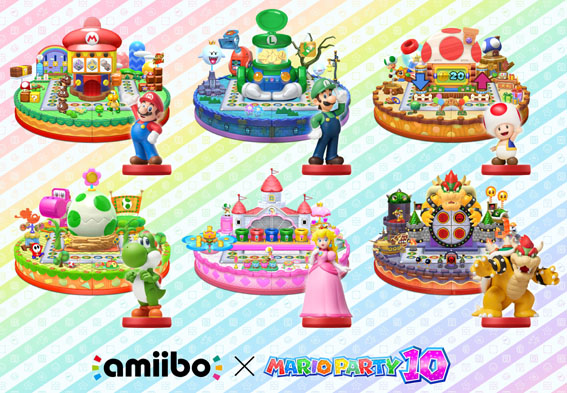 Finally, Mini-game Tournament. It’s the only mode where you can play with 8 players, which is a good way to let more people join in on the fun. The game starts with 8 players divided in groups of 4. First, the players in group #1 compete in a mini-gamewith the players coming first and second moving on and third and fourth being eliminated. Same thing with group #2. Then, the last 4 will face off in a mini-game with first and second moving on again with third and fourth being eliminated. Finally, the players who placed first and second in the mini-game face off in a mini-game with the loser being eliminated and the winner running to a giant crown to do their winning animation. Overall, it’s a good addition, but imagine how large-scale it would be to have a Party with this amount of people. It would be cool, right? 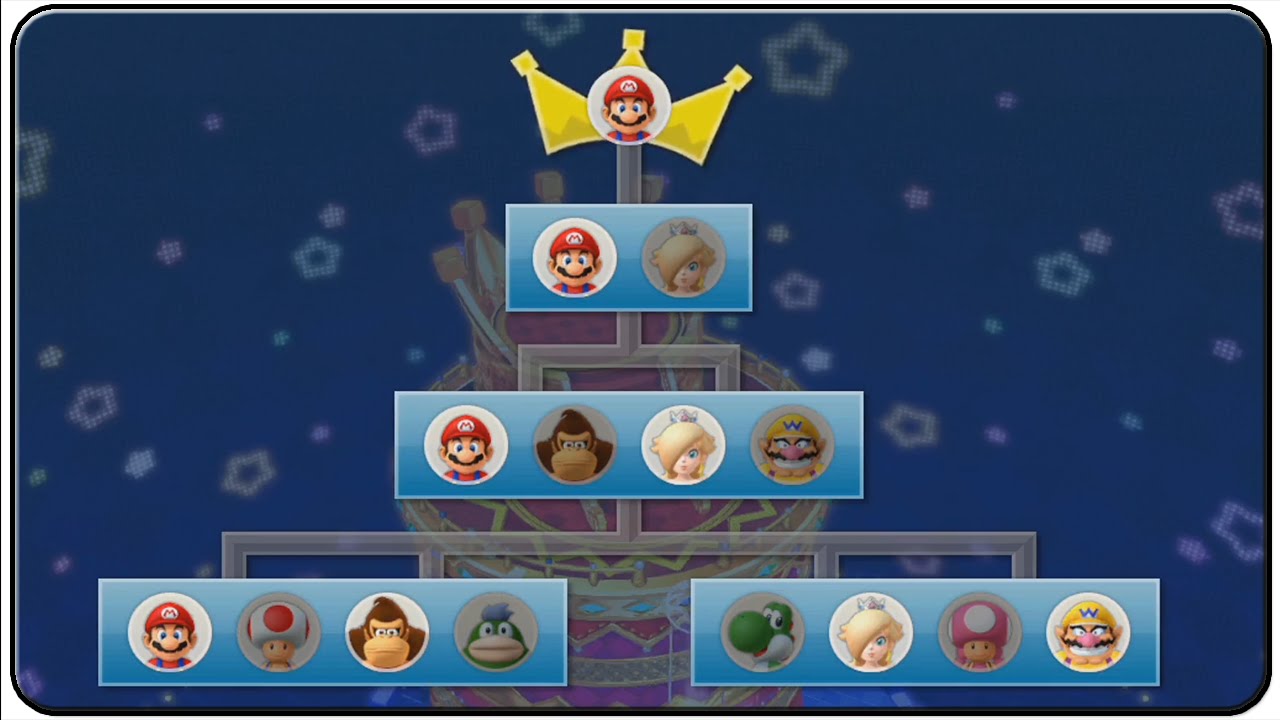 Now for the visuals and sound design. Really, the Mario Party series has been known to have great graphics, but this one takes the cake, mostly because it’s on a upgraded system. Really, this game looks good. The physics are good too. 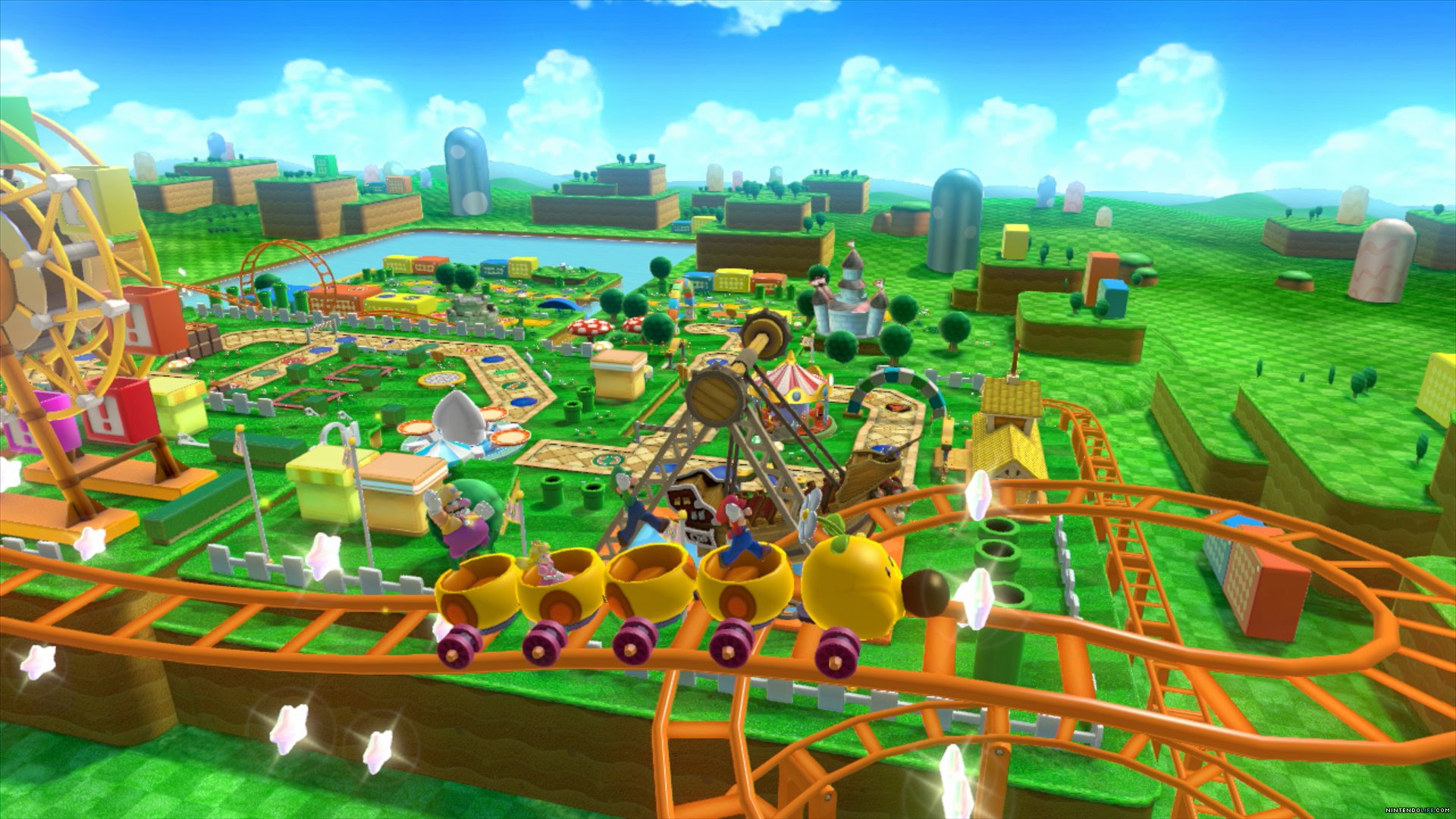 Now, onto the main menu. It’s really simple, with icons to accompany each submenu, though sometimes I wish some options were part of the main menu instead of being hidden away in a submenu. 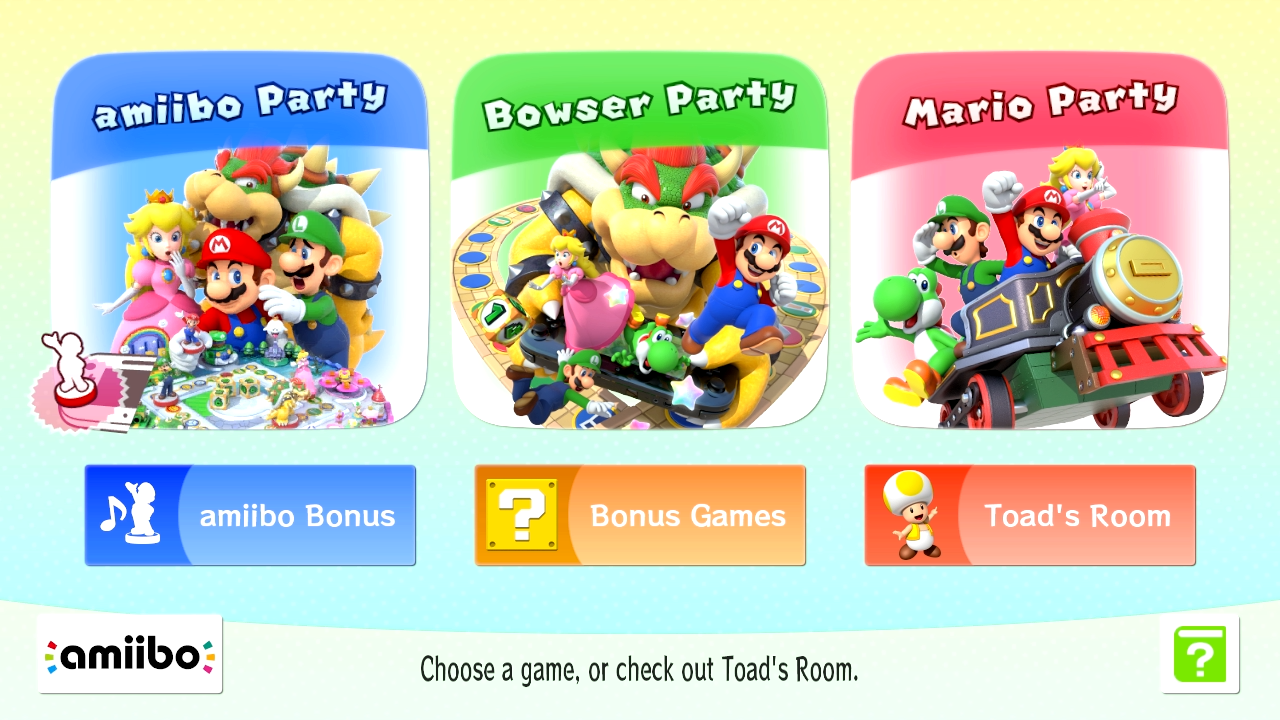 Finally, the sound design. The music’s pretty good in this game, though you can tell it’s very family-friendly (not that any past Mario Party games weren’t family-friendly). The sound effects seem to have been borrowed from past games, though some have been changed to higher-quality sounds. Overall, the game’s presentation is great for parties though not that great if you’re playing alone (like me most of the time).

Overall, I rate this game an 8/10 because this game, though having borrowed elements from past installments, it still polishes them and makes them look and feel great on the Wii U.