Once more, Mario and his friends (as well as enemies) are once again back playing tennis after some years from the last time they’ve done so, but do they still have their rackets in good shape or was it required a bit more of training?

Ultra Smash is the sixth game with the Mario Tennis name (seventh if you include ‘Tennis’ from the NES and eighth if you would count the Wii version of Mario Power Tennis on 2009) to be released on the Wii U after three years since the last one, Mario Tennis Open for 3DS. This writer here will admit that he did play Mario Power Tennis on the Wii and actually really liked it. Yes, the controls can seem unresponsive at first, however, it only takes a little while to get used to, and I did find them functioning well beforehand. I will not be based upon that game’s personal reception so I can compare it to this one. Thus, I prefer to look at this game as its own thing and not compare it a lot to the other one I’ve had experience for fairness sake. 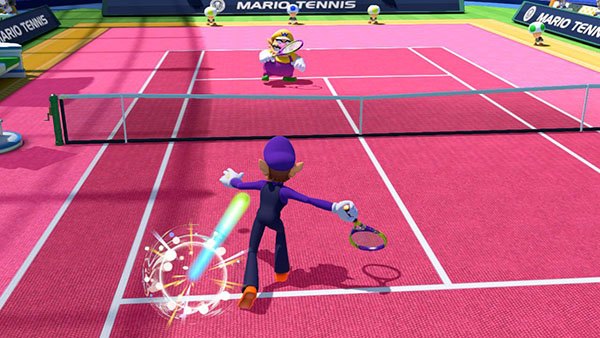 With that said, I should state right out of the gate that Mario Tennis Ultra Smash isn’t better than Power Tennis, but not to the point that is a disjointed abominable mess. As to why that is that, this review shall explain as it goes. First things first, the presentation is nice with some neat musical tracks to listen to during the gameplay (admittedly, I was sort of with the menu music in my head before even starting the game), and the characters feel natural to their major characteristics. Speaking of characters, the roster does have a varied selection of Mario characters from old and new games to choose from with a fair number of 16 to play with, 13 of which are veterans from previous installments while the other three, coincidentally all females, are new to the fields. 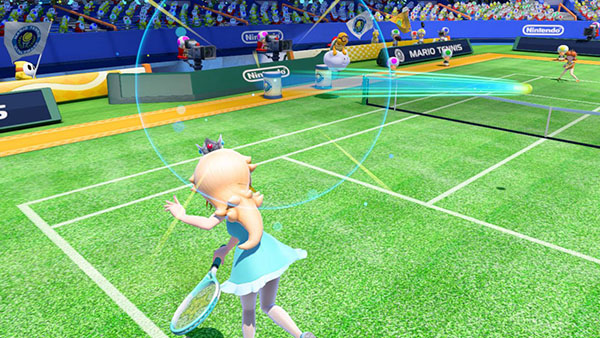 The typical gameplay of Ultra Smash is an arcade-like tennis type where you input various different shots depending on the button and direction input. It does require bits of strategy here and there, especially to achieve with success a new mechanic to this game, the Ultra Smashes. If you decide to play a match that’s not entirely based on your skills with the racket alone, there will be some Shot Pannels, which make their return since Mario Tennis Open, appearing often to boost up your Power Shots in different variations and occasions, and one of these also happen to be Ultra Smashes. Basically, these grant your character to springjump high in the air and bounce the ball at supersonic speed. Almost granted to never fail. Personally, as satisfying as it is to perform one of those, a minor nitpick I had with them is that it is a bit cheap sometimes when your opponent sends you to one side of the court and then uses this shot to send the ball ultimately at the opposite direction. Sure, it doesn’t always appear often, but I couldn’t help to notice that almost everyone I faced online did that same strategy to score points sooner than later. Taking that to the side, the gameplay feels fast-paced, fun, frantic and strategic too. Nintendo did take the phrase “quality over quantity” pretty fairly this time.

Even if that phrase would often mean a good thing, it would mostly be seen as an issue here, as the quantity of things to do in this game is rather low. From the main menu, you have six options: Mega Battle, Classic Tennis, Mega Ball Rally, Knockout Challenge, Online and Rewards; and in that context, it mostly describes all of what content this game has in store. Assuming this is a 30 or 40 dollar game at the moment, that would be the most ideal price for the game and its offerings. With that said, we should analyze at what they do in the game quickly, shall we now? 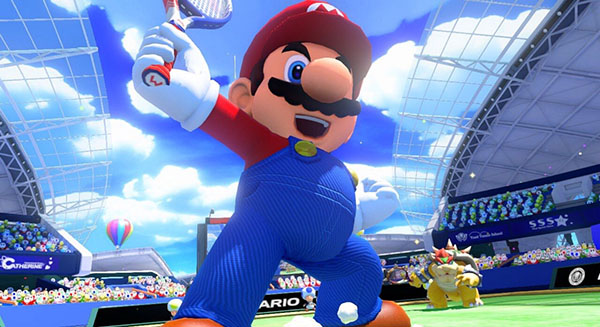 Starting with, oddly enough, the literal largest game mode in the menu is Mega Battle, where it adds in the debut of the Mega Mushrooms in the courts to give your super-sized character more range strength when hitting the ball. Essentially, the Mega Mushroom is considered as one of the natural sell-out points of Ultra Smash, and for being that, let’s say that it is rather unstable for the most part. For example, sometimes, both you and your opponent will have the Mega Mushroom, but at other occasions, either only you or your opponent will have the item in hand, so if your opponent is the one to have it, consider yourself raising your A-game at least for almost 5 minutes, the minimum time this item will cause its effect (if the match even takes that long my friend). It is fun for a handful amount of matches at a time, don’t underestimate me in the wrong sense. It just needed some more balancing to spice up matches more efficiently. You can also set to play matches without the Mega Mushroom and even the Shot Panels in Classic Tennis, and they are good on their own too. 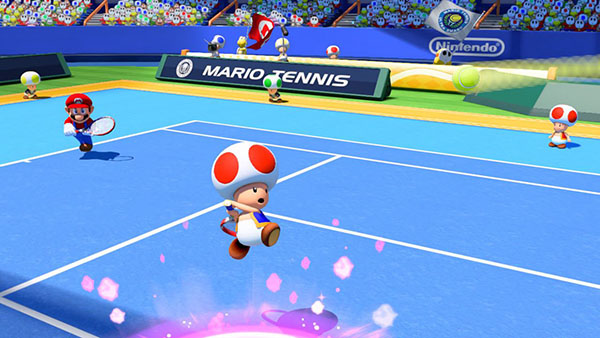 Mega Ball Rally is the only mini-game Ultra Smash brings within, where you with an opponent, in singles or doubles with two extra players, try to keep the rally of a ball that slowly lowers its size and raises its speed over time the most as you can. Compared to the rest of the game, this one is rather average. You see, as you can’t really set up when the match should come to an end and the opponents’ AI are still set to compete against your will, the game simply feels like a endless tennis round when you’re determined to just achieve the highest score non-stop. It does entertain for a matter of time, although I just felt a little like wanting to change modes after a while, so this option is more of a low point sadly. 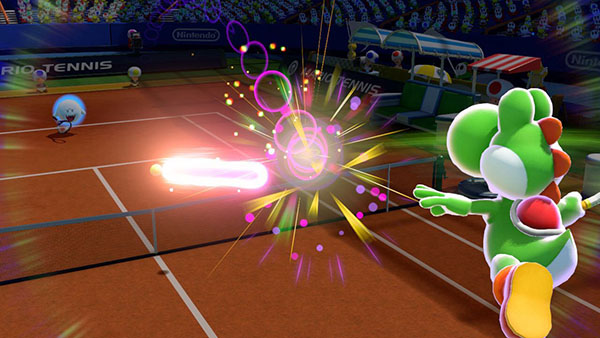 There’s also Knockout Challenge, the mode that does the most of resemblance to a standard tournament mode. Typically here, you set yourself to beat the highest quantity of opponents as far as you can go, with each one becoming smarter and tougher as you continue. Thankfully, the game does save your progress with the character you were using, therefore if you want to change to stop for a while or change to another character for use later, his or her progress won’t be lost without problem. As for amiibo owners, this is the only mode that does use them. Unlike like Mario Kart 8, you are actually able to use the figures to train them throughout Knockout Challenge and as of now, ten of the sixteen characters included have their own amiibo compatible with the game. Here’s a bit of an issue though: it seems like they’re mostly spectating the match in the back of your side and only swing their rackets if they’re the ones who have to save the ball if it goes too far of your reach, which doesn’t always go as intended. Due to that, when you are in need of a Mega Mushroom, your amiibo will rush their way to it and probably get it faster than you, and because they don’t know a lot of tennis fundamentals at first, it ain’t much of a good and fun way of playing if you’d ask me (My Bowser amiibo owns me a lot for what he did). Without the amiibo at low levels though, you can have a decent challenge throughout this mode with skilled amiibo or by yourself, so the mode does the job well to play from short time to short time so you can revamp your skills. 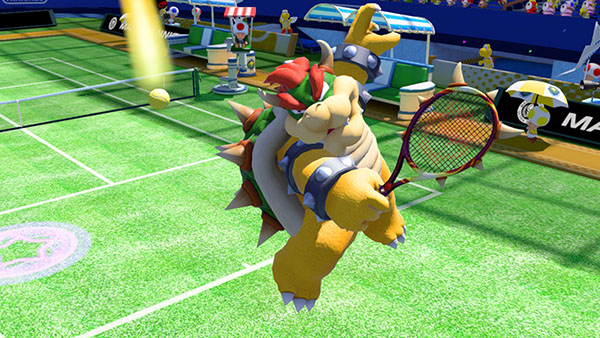 Online also works very nicely for its advantage, whether you decide to play on singles or in doubles with a friend or an amiibo, casually or competitively. It’s fun to play against other people around the world although the mode itself does come with its hiccups. For one, you can’t choose to play with your Wii U friends on a Friends Room privately. And two, once you finish a match with someone you may want to play again with, there’s no option to do that. Instead, there’s an option to skip on to the next opponent you encounter. Because of said restrictions, the mode does’t have a whole lot of variety in its cover, however, it still provides a change of pace if you’re playing the game solo for a majority of it. There’s also Rewards, which turn this into the first Mario Tennis game to feature an achievement system with 25 of them to boot. It comes with a teensy little problem. Now, you do earn coins every time you finish a match in Ultra Smash in whichever mode of your choice. What do these coins function for? To easily access the unlockables earned after beating said challenges without actually doing said challenges. Yes, what is offered is nice, but still, it takes out the purpose of completing them if you simply want to “complete” the game as early as you can. 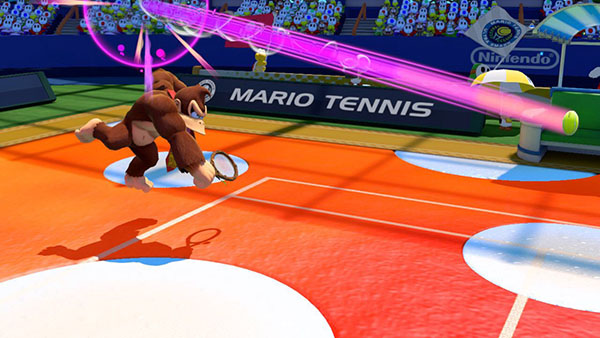 Statically, this should be said. There’s a high chance that veteran Mario Tennis fans won’t like this game. If they compare entries like Power Tennis to Ultra Smash, they will find this game to be a unworthy rushed down product that gives a somewhat unreliable picture of what Mario Tennis is capable of. If you are one of these fans and are thinking of purchasing this, lower your expectations for this particular one. Generally speaking without the other entries in mind, this game is alright. Ultra Smash does have most of its contents packed with some context of fun for solo or multiplayer match-ups and a bit of replay value there, although it’s just some of the handling in other sellout points and amount of things to do that just raise it down a bit from being a standout. It’s not Mario’s most fulfilling sport outing, but far from being something of regret.