Lots of people love aquariums and own one, but how many have a giant tank that can even fit a whale shark? Not many, that’s for sure. Luckily, Megaquarium scratches that itch without us leaving our gaming seats. It’s a tycoon simulation game developed by Twice Circled. Its initial release date is 2018, but a Switch port arrived only in 2019.

With no story to speak of, the game is focused on gameplay. There is a lot going on in creating the perfect aquarium.

There are around a hundred different fish species, each one with its own needs and perks. Some fishes have a meek attitude that prevents them from living in the same tank as more aggressive species. Others need to live in shoals, so the player has to place a great number of them in a single tank. That said, these are some particular requirements a certain species might have and another not. However, there are two constant parameters the player has to mind. They are the tanks’ temperature and water quality. They can be raised using items like heaters and filters or more advanced equipment later on. Another important thing to keep in mind is the tank’s capacity, that is the maximum number of fishes it can store. This number also depends on the animal’s size. 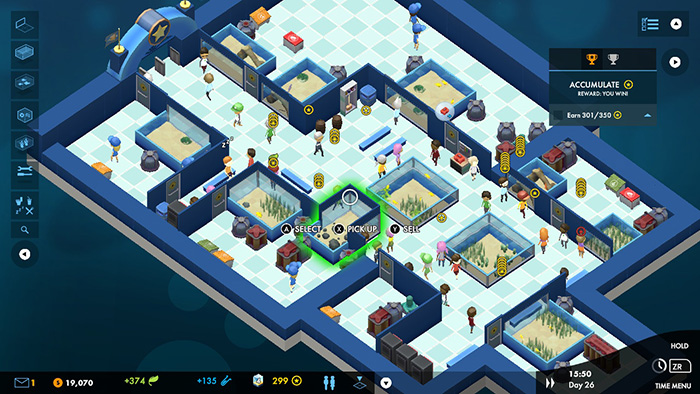 Projecting tanks and deciding which fishes can go together is probably the funniest activity of the whole game. The satisfaction the player will feel when they manage to create a tank with a great variety of animals that can coexist together is second to none.

Fishes won’t feed themselves and even the best equipment can break. That’s the reason why an important part of the game is selecting the staff members.

Each aquarist has to be hired first. They come with different talents and skills attached to them. Some might be better at fixing things while others at attending to the fishes. It’s important to distribute their roles according to their skills, especially regarding more complex actions like fixing advanced equipment.

It’s important to notice how their AI is pretty limited if left as is. Players will have to set a priority among their actions and to create zones in which they’ll work. If they fail to notice it at first, they might be left with an aquarist focused on moping the floor while the aquarium’s most expensive fishes are dying from a broken filter. This creates unnecessary moments of frustration that might cost the current playthrough.

Once everything is set, the player can open the aquarium to the public. This obviously brings another lot of problems and challenges to consider.
Visitors pretend to have what they paid for and even more. They want to see varied and rare types of fishes, possibly in the same tank. They want to eat, drink and use services. From their satisfaction derives a player’s Rank. It’s important to mind how Rank isn’t cumulative, but it depends on Prestige. The player can increase it by checking visitors’ comments and therefore modifying the aquarium accordingly. The visitor’s view rate is also important to raise Ecology and Science Points, used to unlock respectively new fishes and pieces of equipment. 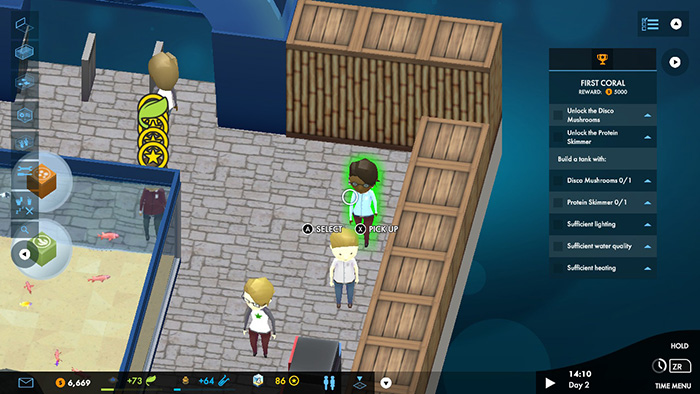 Once the aquarium opens a clock starts ticking. There is no time limit but the passing of time means that fishes get hungry and equipment can break if left unattended. It’s possible to stop time for a momentary breather, to slow it down or speed it up. In this regard, a lot of freedom is given to the player and they can set their experience accordingly. However, there’s always the limited budget to work with and that, together with how visitors’ requests can be either nebulous or demanding, can exert some pressure over the player and diminish the overall enjoyment. It doesn’t help the fact that Prestige is a stat really difficult to raise and its growth rate is abysmal, with a higher tendency to go down instead of increasing.

To the player’s joy, RNG doesn’t only concern unfortunate events like visitors’ misdeeds or equipment breakdowns. It’s possible to meet vendors that will sell certain types of fishes and help the player circumvent the limited inventory. In the long term, once the aquarium is open to the public managing it becomes a repetitive chore. However, these random events will keep high players’ level of attention and engage them more.

The player will start with a limited amount of money, which can only increase when the aquarium opens and visitors arrive. Money represents the most important limitation to keep mind to since without it it’s impossible to give the aquarium the characteristic we want. Everything in this game has a price that the player must be able to sustain. Fishes, decorations, equipment all have a price, even expanding the aquarium’s surface is pretty costly. Staff members have a daily salary and so on. While at first money problems are pretty nonexistent, they worsen the more the game progresses.

Luckily, players can choose their own difficulty level. Other than the Normal difficulty, an Easy mode is available, together with Hard and Brutal. They are limited to lowering or increasing items’ costs, equipment breaking and fishes’ survival rates, but these changes alone can be a lifesaver.

After focusing on the gameplay aspects, let’s see how the game implements them. The player can, in fact, choose between two game modes: Campaign or Sandbox.

Campaign counts a total of 10 different levels of growing complexity. Each level has a different introduction that gives a bit of context to our gaming endeavors. One level has the player renovate a rundown aquarium, while another prepares a private exposition. Every campaign opens with the building phase: the player will decide the initial layout of the aquarium and build it from a preexisting structure.

The player starts with a limited variety of fish and equipment types depending on the starting Rank. Each mission consists of different objectives, that usually range from unlocking a new piece of equipment or a fish species to integrating it in our aquarium. After the player has unlocked a few new items, the remaining objectives usually focus on increasing the aquarium’s Prestige. 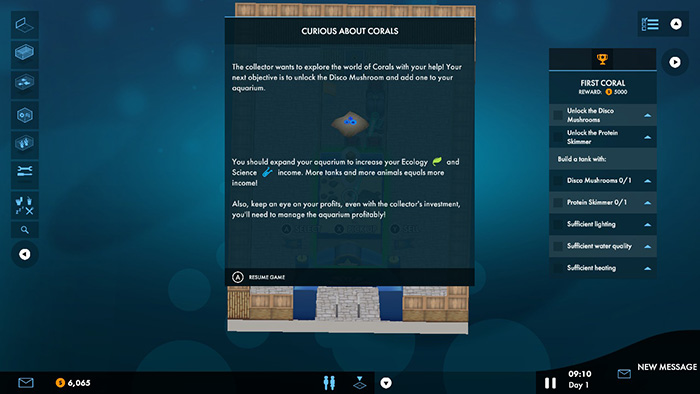 The main objective of Campaign mode is to progressively teach players the gameplay’s fundamentals. This way, it’s possible to learn about all the different features the game offers without feeling overwhelmed. In fact, besides the already displayed information, the game offers a clear and step-by-step guide whenever it introduces a new concept to grasp.

The save function is available anytime. It really comes in handy for undoing mistakes the player has committed. However, depending on their entity, sometimes it’s better to start the stage from scratch than trying to repair them. That’s especially true with levels that offer a limited quantity of resources. Surely, it might be possible to rely on the random vendors, but that can lead to frustrating situations of a never-ending wait and further waste of money.

True to its name, Sandbox Mode is the epitome of players’ freedom. Everything is customizable in there. From the difficulty to the starting equipment, other than random events’ rates. It’s even possible to randomize items at players’ disposal or have unlimited money. 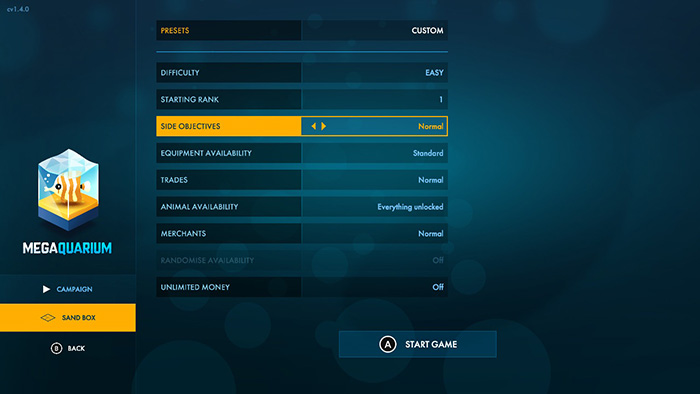 The main problem of Sandbox Mode is that there is no explanation whatsoever since everything else has already been tackled in Campaign. This forces players to get through it first or consult external sources. Obviously that means that Sandbox will cater only to a handful of people, those who enjoyed the Campaign and want more. Other players will have likely already dropped the game. That’s a shame because Sandbox Mode is incredibly fun and satisfying since it’s possible to virtually create any type of aquarium we want.

Megaquarium has a really simple art style. Characters’ and items’ models are stylized and they don’t have detailed textures. This is probably a conscious choice since more detailed graphics could cause performance issues when many objects are on screen. However, admiring more detailed aquariums would have been a more enjoyable and immersive experience. The game offers the possibility to look at the aquarium in a first-person view if the players zoom the screen enough. Again, better graphics would have made this feature more relevant. 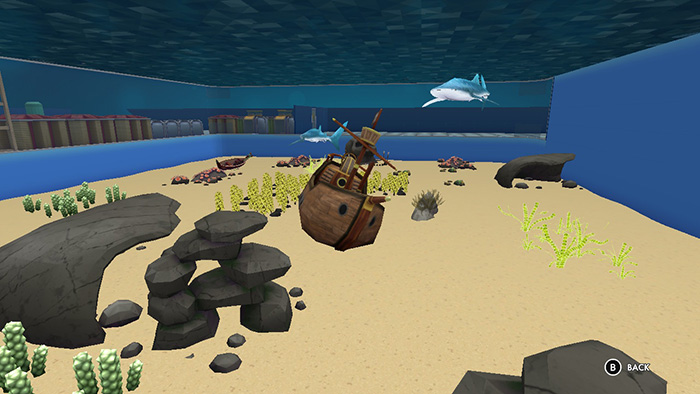 The soundtrack isn’t particularly relevant but offers nice and relaxing background tracks that embody well the spirit of the game.

Campaign Mode’s first missions are pretty short and the player will complete them in less than thirty minutes. On the contrary, the last ones can be pretty long, with some of them that can drag on for a few hours. Therefore, more than 20 hours will be necessary to complete the Campaign. However, there isn’t any reason to play the Campaign more than once.

People who enjoyed the game can pour many more hours into Sandbox Mode, especially considering how any single playthrough can be different from the previous one.

Megaquarium has a few technical shortcomings and needs some quality of life improvements but it’s still a good management game. It manages to explain well its basics to the players. There are some frustrating moments, but it’s almost always possible to prevent them thanks to this.

It might not be a game for everyone, but it captivates its niche well. Aquarium lovers and management fans will love it.