Before Metal Torrent, DSiWare was a very barren territory for shmup (shoot ’em up) fans. And it makes sense – the bullet hell genre has never been extremely popular outside of Japan, left to a few generous efforts by niche developers and publishers. So Nintendo ventured into this territory by themselves publishing the Arika-developed Metal Torrent on DSiWare.

One thing to note is that in bullet hell’s later years, doujin shmups more often than not had you flying an anime character around, usually female, shooting bullets at other anime characters because this made the game infinitely more appealing to the few fans who still stuck to bullet hell games. Metal Torrent, however, returns to how the genre’s early presentation was – with you flying a futuristic spaceship in futuristic locations shooting futuristic-looking mechs. There’s no story, and very little variation in locations and the enemies you shoot. There is only one objective in the game, and that’s to get the highest score possible.

There are two difficulty modes having you piloting two different ships. Easy mode gets you a ship with so wide a firing area that if you position your ship at the bottom of the screen (you can pick whether you want the action to be displayed on the upper screen or the touch screen) its bullets cover the whole screen. You have a health bar that also doubled as your special attack gauge split into three sections. Using a special attack, a bomb that turns all bullets on screen into pickups and kills all enemies within a large radius of your ship, drains one section of the gauge. The gauge slowly refills and refills faster for every pickup you get (which are very abundant too). Oh, and if you get hit by an enemy bullet, the special attack activates automatically as well, meaning that Easy mode really is very easy. It takes an average of fifteen minutes to beat and you’ll rarely die.

Insane mode is on the opposite end of the difficulty spectrum. Your firing range is narrower (but still very wide) and your special attack doesn’t activate automatically, and it can only slow bullets down, not destroy them. Your health doesn’t refill automatically either. Insane mode is just as difficult as Easy mode is easy, and you’ll rarely manage to survive past the first boss. There is no mid-difficulty either. 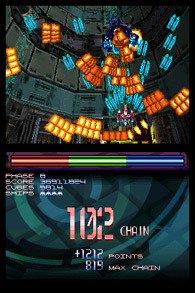 You can also pick whether you want enemies to appear in Random Mode or Patten Mode. Random Mode makes the game mildly more challenging, but if you’re playing on Easy mode you still won’t notice any real increase in difficulty. In Pattern Mode, enemies appear in set patterns at set areas, meaning the better you memorize their patterns, the quicker you get to shoot them and collect their pickups and the higher your end score.

Apart from that, the game’s visuals are pretty average. They sprites are quite grainy if you’re playing on the 3DS, although playing the game in its original resolution helps somewhat. Even then, you can’t say that the visuals are mind-blowing, especially since there’s very little variation in the level locations, even if they comprise 3D objects. The only impressive thing is that slowdown – a complain common with shmups – is non-existent in this game. The sound effects are well done, though. The shooting and explosion effects are good, and the sound of the pickups gets faster and more high-pitched as you collect more of them. It’s impressive and has a very good effect in a tense game like this.

There are four music tracks: one for the title screen, one for menus, one for normal gameplay and one for boss fights. The first three are futuristic-sounding and are at a slow to moderate speed. The boss fight music is fast, heavy and aggressive, and coupled with great sound effects boss battles sound brilliant. Overall, the music is also good. 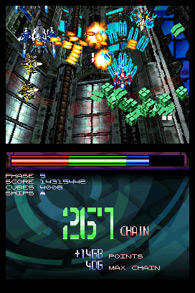 The most important element of Metal Torrent – an otherwise simple, short game with only eight levels and four bosses – is the online leaderboards and the saving of replay data. You can save your entire replay data for your best playthroughs, and if you’re in the Top 10 of the World Leaderboards your replay data will be saved online for other people to download and look at and copy your tricks. You can go online and see your ranking in the world. For any high-score chaser hungry to be the best, this increases the replay value exponentially and a 15-minute game suddenly becomes something that can last anywhere from five hours to fifty. Maybe the latter was an exaggeration, but you get the idea.

On a platform laden with great shmups, I’d have said Metal Torrent isn’t worth a second glance. But it’s on DSiWare, a platform whose shooter library is incredibly skint, and even if it’s not the best-made game around it deserves an extra point for at least being made. That’s not to say it’s a bad game by any standards though: when you consider the game’s excellence in the sound department and the way it does what it sets out to do – be a fun yet simple game for high score maniacs – very well especially with its online leaderboards, it’s easy to decide that it’s a great game for the DSiWare platform. Unless you don’t like shmups.