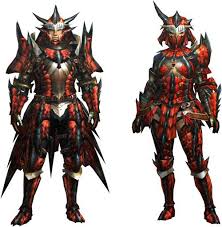 This guide will show you how to make a good armor set for you to use against large monsters, be it surviving Chaotic Gore Magala’s enormous and powerful blasts, evading Rajang’s quick and powerful attacks or being able to beat a great Fatalis in minutes.

The first section will show you a matching armor set. Then you’ll learn how decorations work.

I’ll use the ‘GX Fatalis Crimson’ set for this demonstration. 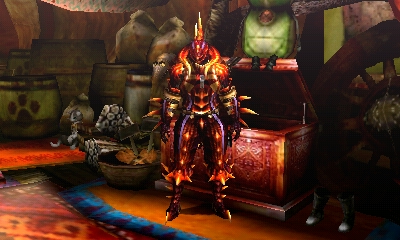 On the first page of Status you should see the Defense and Resistance of the armor. This is very important because you don’t want to face a Rajang with -25 Thunder Resistance. Always make sure you have good Resistance against the monster you’re facing.
Another factor to note is the defense; it’s best to get the highest defense you can, right? So 400 defense won’t get you very far at all against a G-Rank monster. 500-600 is okay but 700+ is where it’s at. If I don’t upgrade my armour it’s at 559 Defense. After upgrading it’s at 701, it’s still not the highest it can go but it’s good enough.

So that tallies up at:

So I could be matched up with a Monster with a Thunder or Fire element and withstand it pretty well, the others, not so much, you definitely wouldn’t want to fight Stygain Zingore. Always try for the best Resistance against the kind of monster you’re up against.

Congrats, you’re done with Part 1. Moving on to one of the most important parts.

Looking at the second page of your Status you can see ‘Active Skills’ on the left. With my armor set my Skills are:

The first three are amazing skills. The last one will be a bit hard to deal with, but that’s the armor skills. We can still add more.

Those circles and dashes where you see your weapon and armor are known as ‘armor slots,’ which help a lot. You can put decorations in them which boost skill points. You might also see a empty space at the bottom of your armor list on the second page. That’s known as a Talisman. It can carry slots and give skill boosts as well.

Now keeping all of that information in mind, let’s move onto the third and final page known as the Skill Tree. It shows your skill points and more. Let’s add some more skills to that tree, shall we? I’m gonna equip a Talisman before we progress any further, but what kind of skill should I equip? Let’s take a look at our Skill Tree. So let’s try to get rid of that Constitution -2. It’s at -15 Skill points, so if we add a Constitution Talisman of 6+ we can get rid of it.
So I equipped a Talisman with Constitution +6 and Fire Res +8. Now looking at the skill tree, it we get 2 more points for Fire Res – we can get some more Fire Resistance! How do we do that? By going to the smithy for some decorations.

I equipped a Fire Resistance jewel that took up one slot and gave a boost of 2 skill points. Now we get a boost in Fire Resistance. Let’s look at some more jewels to fill up our remaining 7 slots.

With all of this Fire Resistance, what if we want more Fire coverage? It’s most likely to be high Heat like at Volcanic Hollow when we’re up against a fire monster, so I’m going to equip 5 Heat Res jewels. Now we got the Heat Cancel skill. With only 2 slots remaining we can’t get anymore skills, so our set is finished. This isn’t the best it can be, though: upgrade those armor pieces to get the max Defense possible on it and equip skills that benefit your weapon and armor. Good luck!