Midtown Crazy Race is a racing game as well as a tribute to those mad racing games from the 90s and it makes a nice job at that… if it was released in the 90s. This mobile game got released some time ago on the Nintendo Wii U eShop and it was our turn to review it.

When you start the game, you will have access to three modes:

For the last two modes, there is a total of 25 tracks around the city which you need to unlock when you play each mode. The amount of races you win will also help you unlock different cars, featuring seven different cars you can choose (you can also choose the color).

The main problem is the physics – it’s broken: you can easily lose control of your car or different reasons, including the blocky design of the roads. You can also encounter problems when crashing into others cars, including getting stuck to the car. The problem won’t be just for you, the AI also has problems with the physics and it’s really easy to see them crashing and circling around the track.

If that wasn’t enough, the small quantity of cars in the traffic can also crash into you even before being able to play (during the countdown), requiring you to restart at the start screen.

The control scheme is simple: tilt your gameplay in order to steer and press buttons in order to accelerate, use brakes and the other controls. It works really well, however, it can still be difficult but I would have loved the presence of different control schemes (such as using the L-Stick instead of tilting the controller). 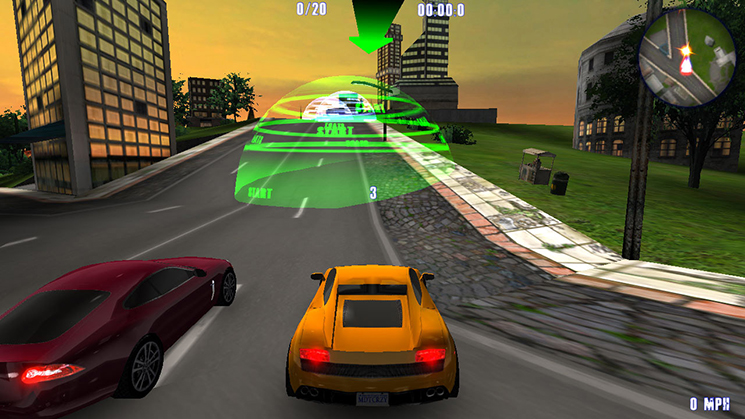 The title has some design flaws graphically (you can find buildings under the ground and a few parts with a small part floating in the air), but for a budget eShop title, it looks nice. You can easily compare it to a PS1 title since the modeling work is well for the cars and buildings are basic, and the textures quality can be better. The soundtrack presents a nice variety of songs resulting in a good work overall.

You can also choose if you want to play during the day or the night which is a nice touch. If for some reason you do not use the miles per hour unit, you can also change it to kilometres per hour in the options.

The presentation is pretty simple, where I can only appreciate the replay value and the controls. The controls are explained in the manual, but there is a small mistake: the mirror mode is with – button.

Conclusion:
Midtown Crazy Race had the chance to be a good little eShop title, however, the broken physics and lame AI are the major letdowns for this game. Yes, it can be funny sometimes but also really frustrating.