There are easy games, hard games and then there are the extremely difficult games. With death waiting patiently around every corner, Mistover is one of the latter. Players must strategize and overcome the daunting future that befalls them. Survival is all that matters in this cold, heartbreaking world.

One day, a large vortex emerged with a strange mist leading an army of espers, destroying everything in their path. After causing catastrophic damage, the espers crawled back to where they once came from and the mist no longer consumed further lands.

In order to be prepared and fight back the unforeseeable danger, an Expedition Corps was established. Players will be a part of this Expedition Corps to explore the depths of the mist, find treasures, defeat monsters and prevent the end of the world.

The story isn’t anything breathtaking but it provides a foundation to the gameplay.

Every move made is one step closer to an apocalypse ready to occur. Mistover will have players trying to 100% clear every dungeon they explore. Failure to do so will speed up the inevitable doomsday. Characters must be recruited, armed and polished with the best skills. Gold and EXP must be earned to help better develop each character. Books must be collected to make the experience more convenient.

While the tutorial explains the basics well, there is no way to revisit the information if something was missed. The game will sometimes leave you on your own with no new requests to accept until deciding to explore new areas past the mist. As the game may have you restarting from the beginning, its ability to skip tutorials and its fast-forward battle scene button are quite useful.

Players are able to carry a limited amount of items and characters on their expeditions. Not carrying the right resources will make it easier for the monsters to defeat party members. Hunger and Luminosity must be maintained as well as each character’s health. Leaving a character to bleed out instead of having a bandage to patch them up will have you arranging funeral plans earlier than expected.

Movement is crucial while on expeditions. Not taking advantage of diagonal movement may come with its price to pay. Every little thing counts, even if something does not seem important at first; the game is unforgiving. Not planning ahead of how to effectively move can spell out the end.

The Struggles Of Survival

One word that can be used to sum Mistover up is hardcore. The game has three difficulties yet the easiest will still haunt you in your dreams; not really, but it will certainly give you a run for your money. It starts off easy, but sooner or later, as its name implies, your characters will be picked off one by one until your strength is weakened and your party is wiped. Normal and Hard difficulties will require a vast amount of experience and a lot of grinding to build up all characters. 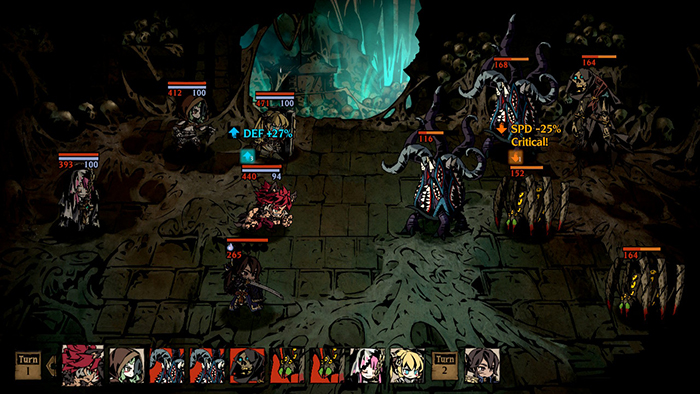 Skipping out on exploration, treasure hunting and battles will speed up the doomsday clock. Not matching character levels with monster levels of a dungeon will result in the same penalty. Having all of your characters fall in battle will make the game even more tedious than it is. No matter what you do, the game tries its best to kick you down into the gutter. Players must have the intention to thoroughly explore dungeons if they hope to climb high and know when to give up, regroup and try again in certain situations. 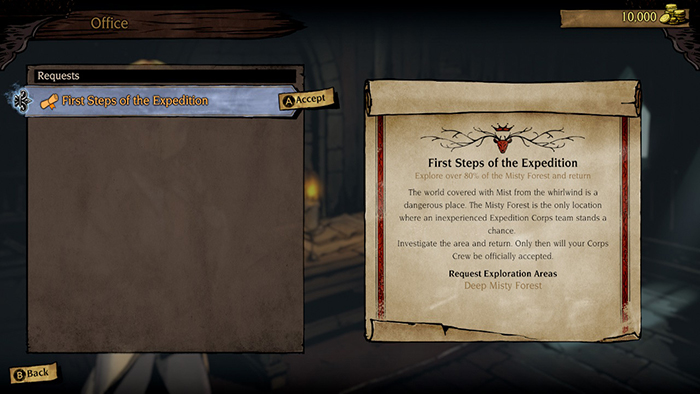 Clearing dungeons might feel like a chore at times. Bosses are wickedly overpowered where you must know the tricks to defeat them or grind to level up characters and build them up so they can withstand attacks. Consistent poor performance in dungeons can result in a ‘game over’ and getting too attached to specific characters can sometimes be a bad idea. Expect to lose corps members from time to time and gain new ones to develop. The good news is that it lets you experience all of the classes the game has to offer.

Fights take place on a grid-based battlefield using the character formation set before the battle. Characters can use skills, items, move or block during their turn. Each character has their own set of skills. The position of characters is vital to their effectiveness. 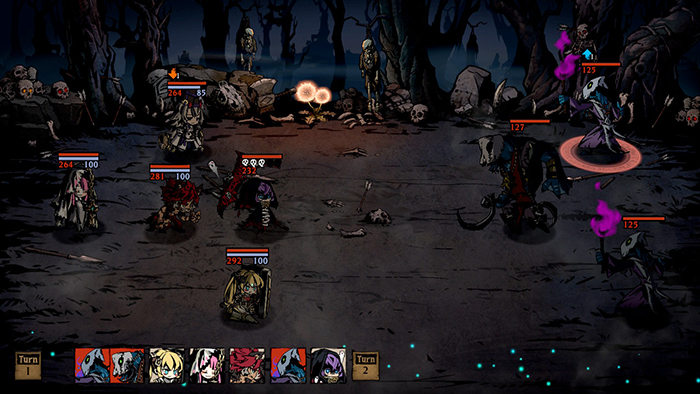 There is a pity system for when a character is about to die. As the game forces permanent deaths, it gives players one last line of hope to save their characters. It keeps the balance between challenging and merciful gameplay. Mistover is also the type of game where players will be praying that enemy attacks miss their characters when in a pinch. Losing an important character that you’ve built up is one of the most painful experiences you will undertake while playing. 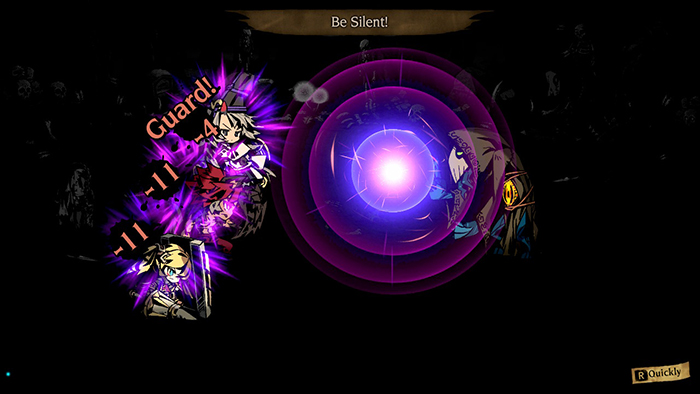 The variety of enemies found in each dungeon is lacking, therefore you should always be prepared to encounter familiar faces. Each skill, whether it is one of your characters or the enemy, has its own action scene. It can become a bit repetitive seeing them over and over again. Some of the enemies can make battles frustrating with their status effects such as stuns and bleeding.

The game has eight different character classes and it starts players off with a limited amount. After the first dungeon, the others will become available to recruit. Each character class has its own unique design and each character can be renamed, making them more personalized, however, it is disheartening to discover characters of the same class cannot have their own color to differentiate between them in terms of appearance. Only their names make it possible to tell them apart.

Besides the lack of variation in design, the character classes are enough to satisfy most players. There is the tank, the healer, the magic caster, the brute, the samurai and it doesn’t end there. Multiple looks for each class would have been more appealing to the eye.

Manually saving your progress is not possible. The game forces you to autosave your data whether you like it or not. This eliminates the ability to reset from an old save point, making the game even more difficult than it is due to its nature. One mistake can be your demise.

The game also fails to inform players of its autosaving ability. Naturally, some players may want to continue until they discover a save point to save their progress. The lack of being informed means players might keep playing until they become tired enough to seek out the info themselves.

Characters follow a semi-chibi anime art style. Together with the medieval world, they work well with the game in giving off a dark atmosphere where death follows with each wrong turn. The soundtrack helps in this regard as well. Its music pumps players up for battle while also having them beg for mercy when one of their favorite characters are targeted, staring death in the face.

Near-death experiences are a major relief.

Japanese voice acting is present in the game. It’s pleasant to listen to the voices even if you do not understand what is being said. It’s normally accompanied with English dialogue. Sometimes characters may speak up on the character list or during battle. It’s nice to hear them speak in a foreign language and it won’t feel too repetitive due to not understanding what’s being said. The opening narrative would have benefited from this even if it was Japanese.

Mistover isn’t for the faint of heart. It’s a brutal dungeon-crawling RPG where players must find any means of survival while avoiding the end of the world. Its gameplay can be tedious at times and a simple mistake can lead to more grinding to be in tip-top shape. Completionists who want an extremely challenging game with a dark atmosphere will welcome Mistover with opening arms.