Ever wished there was a game like Plants vs. Zombies on the 3DS, but it never happened?
Feel relieved then, as Monster Combine TD is what you’re searching for.

Indeed. Without really wanting to jump directly on the game, the story is simple: You’re just a regular person who get sent into another world to prevent the destruction of a school. Not any kind of school, though: A school where you learn how to summon monsters. And you’ll be able to count on the Portal Boy, and a few other people to help you!

When it comes to the gameplay, things get quite simple: On the upper screen, you can see the field, the monsters you have summoned, and level completion, while the lower screen will be your greatest tool to progress further in the game, as it allows you to summon monsters, move them around, and even make them evolve. And that’s not all: there’s a girl named Katrina who’s also here to help you, and you don’t need to summon her; you just have to watch out a small gauge on the top-left corner of the upper screen. When the gauge is full, move the Circle Pad in any way, and select a spell! There’s many of them, but you can use Spells only a limited number of times. 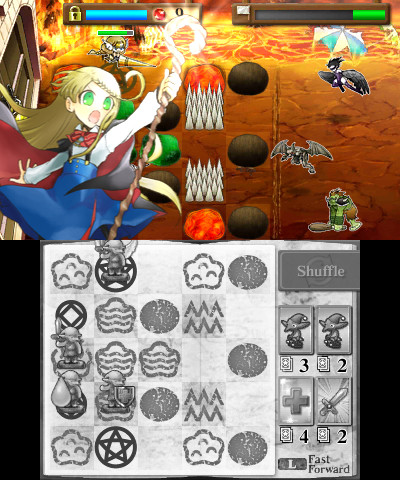 This is Katrina. She’ll be really helpful if you start to be in trouble, or simply if you’d like her to boost your monsters’ statistics for a small while

And, you should always have a look at the map before starting a level. Indeed, there are different tiles that you can use at your advantage: there are “Glue” tiles which slow down your enemies and your monsters as well, Hot Springs which regenerates slowly a monster’s health, Rocks, which blocks the path, and forces monsters to find another way and Lava, which, as you guessed, depletes monsters’ health. Anyway, that still leaves you enough strategical possibilities.

And a little bonus awaits you at the end of each level: You gain points, that you can trade for upgrades. By upgrades, I mean, more spells slots, more cards can be used, reduced time between each summon, and much more. Now, we’re talking about strategy at its finest! So, what are you going to upgrade? 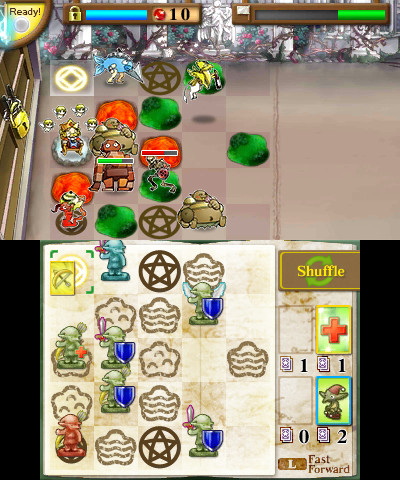 And the game features a lot of different monsters to summon or to evolve to. So many strategies!

However, there is one con: Every time you start or restart a level, your deck is shuffled, meaning that you might get in trouble or screwed from the beginning, which can be a bit unfair if the spawn time is too high or if you only draw evolution cards.

Talking about evolution cards, there are many evolutions. There are Warriors, who hit relatively hard, Long-Ranged Warriors, who can, as expected, fight from far away (using their bows), and there are also Healers, who restores your monsters’ health and Defenders, who… defend, just to cite a few of them. 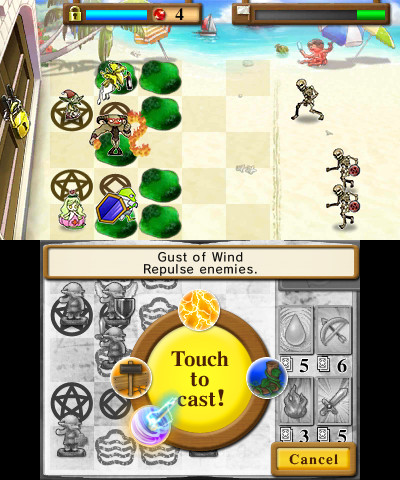 I told you: There’s too many ways to adapt to a level’s map and defeat the enemy !

Graphically, the game is good-looking. A strategy game like this one doesn’t necessarily need super-hyper-good-looking graphics anyway, and the anime style is nice too. Characters look like as if the game really was an anime; overall, it’s really great, and the music is pretty good too.

Also, to mention it: In case where you manage to beat all of the levels, you can download more here. Yes, it means no “forgot to include it, pay for it later” excuse known as DLC, which is sadly pretty rare nowadays.

Conclusion: For a Plants vs. Zombies-like game with an anime style, it’s really great. It features many different levels with varying difficulty, infinite strategies, extra stages (available for free), and a relatively fitting interactive story. The only con is the randomized cards which can result in getting you losing from the beginning of a stage if you’re unlucky. Aside from that, I can’t help but recommend the game. So, if you have some money willing to be spent carefully, pick this game; it’ll be worth your money.