The moment you hear Black Sabbath’s ‘Iron Man’ riff is the moment you want to play electric guitar like never before. You see that Abylight’s Music On: Electric Guitar, which appeared on the DSiWare store before, has been re-released on the 3DS eShop. What do you do? Well, if you don’t know how to actually play guitar, it won’t teach you. But if you need a portable guitar simulator to help you come up with stuff which you can write down and play on your real axe later, Music On: Electric Guitar is worth a look.

The app allows you play on a virtual guitar with the frets displayed on the upper screen and the body on the lower strings. You can pick and strum using the stylus, and you can change the chords by holding the Circle Pad or D-Pad. The face buttons allow you to switch to a different set of chords. Four sets of eight chords – you’ve got 32 chords to work with at a time. You can change which chord is mapped to what button, and the upper screen shows where the fingers go on the frets and if any string is disabled for every chord. You can lock a chord using the R button so you don’t have to hold the directional controls while you play on it, and the L button allows you to use a palm mute effect. The sound varies on how hard you pluck the strings (my stylus went through quite a bit of abuse because of my admiration for Angus Young). While you can’t do hammer-ons or use a whammy-bar, the app still lets you do quite a lot with just the guitar itself – we’re not even talking about the effects you can apply to it yet. 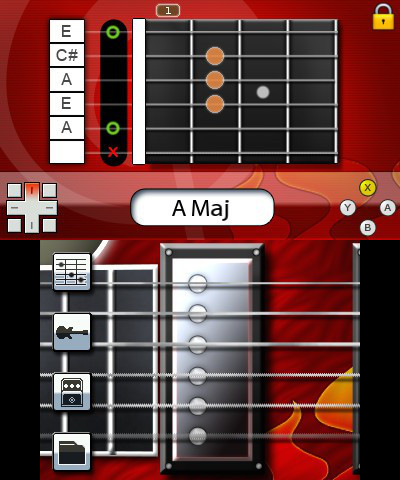 However, while the strings are arranged and displayed in a way that you can easily use online guitar tabs with the app to play any song you like if you manage to map all the right chords, the lack of control over the fretboard besides chord mapping makes it cumbersome. You need to move through the chord pages until you find the right chord (which demands a high level of guitar knowledge, especially given how they’re named) and even to get down to the right frets. There is no easy-to-use interface for you to move along the fretboard and map out finger positions manually, although that would have made the app as close to perfect as could be for inexperienced axemen. Changing the chord set with the face buttons also renders you unable to play in time with a song if that was what you were hoping.

The app also lets you transpose three notes up or down and has three pedal effects: distortion, flanger and delay. These three effects deserve a whole lotta love (get it?) because of how real they are. Not only can you vary the fuzz, tone, level, width and such with each effect, but it’s presented so well – fiddling around on the potentiometer, pressing the switch, having a guitarist in the app play notes while you adjust the effects to let you observe the change in sound.

You can also save up to ten ‘sessions’ and name them; the chords you map are saved so you can pick up on them later. There isn’t any option for a left-handed guitar, by the way, which makes this app unusable for lefties.

Music On: Electric Guitar does well in terms of sounds and effects, but unfortunately it won’t be of any use to those looking to learn how to play. It’ll come in handy for well-versed guitar players who can use it in its portable glory to come up with material to play later on their real gat, but playing songs on it isn’t ideal with the limited control over the fretboard and how fiddly changing chord sets is when trying to play a song in time.

But at least you don’t have to tune it.