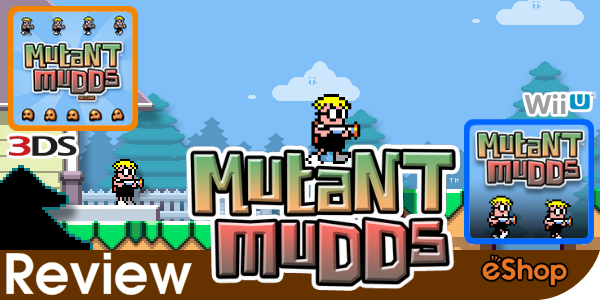 It is the first time I’m doing just one review for both 3DS and Wii U version of a game, but the handheld version of Mutant Mudds received an update including the additional content from the Deluxe release, making both game almost identical. 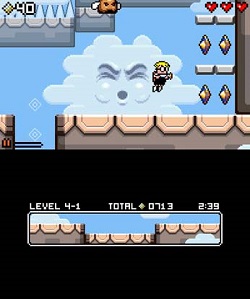 GAMEPLAY:
Any player who buys games must own or heard about Mutant Mudds, a platform game launched on the 3DS eShop that mixed modern ideas with old ones, aiming to give an experience from 8-bit and 16-bit eras, or like the developer calls it, a 12-bit platformer.

Here you play as Max, a kid equipped with a water gun and a little hovering machine in order to clean the mudds in order to save the world witha little twist: meanwhile Max is a 2D character, he’s actually able to move in 3D (or layers).

In the main adventure you will notice that there are five worlds with four levels each and three “empty water seals” over the level’s portal, making a total of 20 levels: the larger seal is when you beat the level and one of the small ones is when you collect 100 Golden Diamonds included in each level.

Those Golden Diamonds are needed in order to get upgrades, however, Max can only use one at time, being a power shot allowing you to shoot at longer distances and also break golden walls, a longer hovering time or a higher jump.

You will also notice there are two hidden or inaccessible doors which are actually portals to additional small levels based on retro consoles such as the Game Boy, Virtual Boy and the Game Boy Advance. One can be easily reached by Max by simply using a specific power-up (giving you the other small seal) and one being only for Grannie (I will talk about her later), making a total of 60 levels. 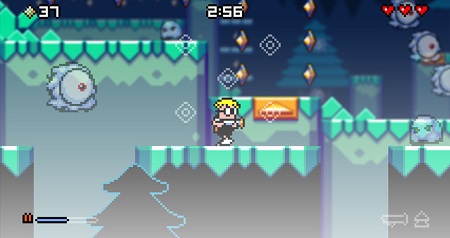 So how do you unlock Grannie? Well, after collecting all the Golden Diamonds, beating every level and hidden level possibly by Max (that means the three small seals from every level), you will unlock here. She is quite different than Max because of one reason: she’s able to use all three power-ups at the same time.

The game doesn’t end after beating the twenty hidden levels for Grannie. There is also another batch of twenty levels from the deluxe version: the Ghost Levels, making a total of 80 levels.

The Ghost Levels are more difficult and a remixed version of the main twenty levels, where there are noticeable differences on the level design. In addition, you can defeat the enemies, making you avoid them at all cost! (there’s a little power-up that allows you to attack them, but they will come back after a little time).

There is also an optional checkpoint feature enabled by default, allowing you to get back to a halfway completed point instead of starting all over from the beginning, if you lose at any point. This isn’t a feature I liked too much because it makes the game easier and less frustrating, breaking its difficulty, however, it’s still a great option for casual players. If you want a challenge, be sure to disable it. 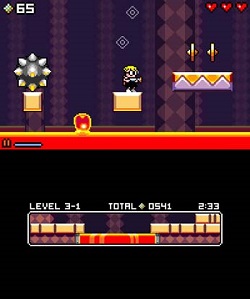 GRAPHICS AND SOUND:
Graphically, Mutant Mudds is a great piece of work, offering a retro feel from the start to the end with five different worlds and three themes for each one. The only flaw I can consider is the lack of variety for the enemies, or at least, the change of palette when accessing those special levels like the ghost levels.

The soundtrack is one of the better aspects of the game making not just an excellent job, but also makes you want to play more retro games after playing it, where it offers over twenty different chiptune songs. In my opinion, you will never forget the World 1-1 song since it’s a classic type of melody. 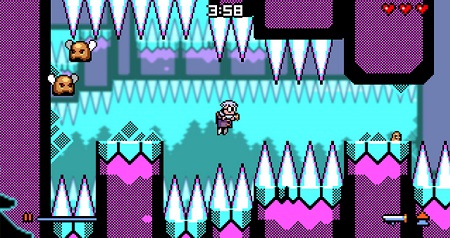 PRESENTATION:
The presentation is exceptional for both versions of the game, featuring a good interface, a good quantity of levels, the optional checkpoint system and the main feature of both consoles: the 3D effect and the off-TV mode.

Sadly, the manual is just limited to the controls, where adding more details about the characters or the enemies like the website would have been a great touch.

CONCLUSION:
Mutant Mudds is just a pure platformer game with an excellent level design, and it’s a must have for any 3DS and Wii U player on the eShop. If you only want to pick one version, the 3DS version can be considered the definitive version, and if you want a larger screen or more variety of controls, go for the Wii U version.