Some games are hard to review, or aren’t what you actually expect. This one is one of those hard to review games because it aims a specific audience: children.

My First Songs, as the name says, is a game for children to learn their first songs. I won’t go in detail on which songs are available, but there’s 15 available in total. 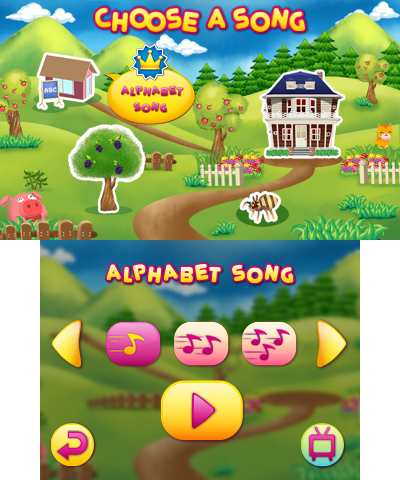 The interface is easy to understand, even for a child. All the actions are done through the touch screen, and while playing a song, three types of notes will appear on the lower screen: blue notes, orange notes, and purple notes.

To deal with the blue notes, just tap the screen at the right time (well, unlike most of the rhythm games, there is no “Perfect”, “Good”, “Ok” or “Bad” timing), while orange notes requires you to hold the stylus on the screen and release it when the note ends, and purple ones requires you to draw circles as long as the note isn’t over. 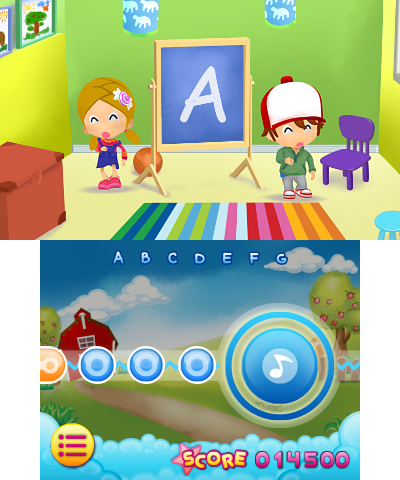 During that time, the upper screen will display a video clip (unlike some other games who uses a 3D engine to render characters singing, but that’s not really what I have to focus on), and lyrics will appear on the lower screen in the same time as notes.

Also, I forgot to say something: there are a few other things in the game. First, when you clear a song, there is a ranking system. No, not that kind of online ranking one, but the screen simply displays an image depending on your score. The second thing is before you start a song: You can choose the difficulty. One note means it’s easy, Two Notes means that it’s average, and Three Notes means that it’s hard. 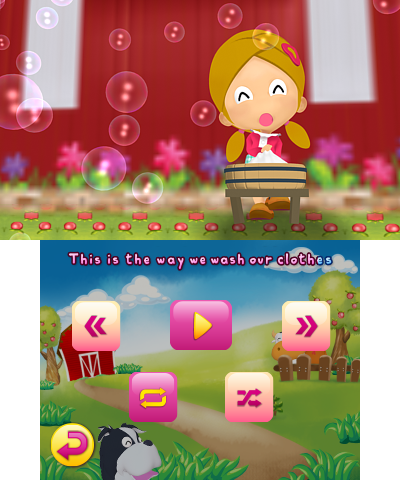 And to finish, if you don’t want to play the rhythm game, just touch the TV in the bottom-right corner of the touch screen. It will play the video clip, and allows you to rewind it, loop it, and much more.

Conclusion: My First Songs is as the title says, a game that targets the younger audience (Probably between 3-7 years kids). So, of course it doesn’t aims older audience like teens or whatever, but it is actually a nice game for children, and you can be sure that they won’t get bored of it easily. Graphics are kid-friendly, just like the difficulty. So, buy it only if you want/have to lend your 3DS to a kid, and if you’re scared that the kid would bash your 3DS to death.