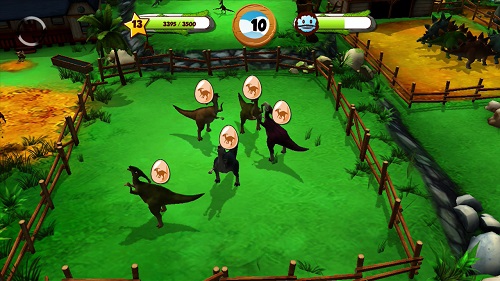 GAMEPLAY:
My JurassicFarm is an unique farm simulator game but this farm isn’t quite normal because it’s a farm of dinosaurs. The player starts the game with a space, a little quantity of money and one compsognathus. The game will offer a really basic tutorial for the public it is aimed for, however, it’s pretty incomplete and lacks the explanation of some parts of the game.

Your objective is to win money selling different elements you collect from your animals, such as eggs, feathers, milk and scales. With the money, you will be able to buy new animals, food, medicine and elements for your farm and animals themselves.

If you want to produce, you will need to care well of your animals and the environment they’re living, keeping them happy, clean and well fed. If you fail, you will lose your animals, meaning you won’t win more money, taking you to a game over screen.

The game features a total of 10 animals: 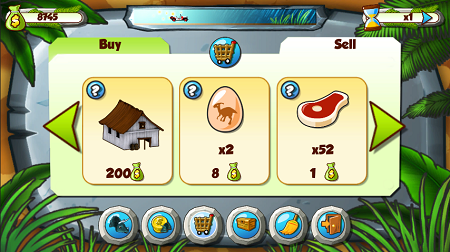 The developers made a good interface, being easy to use and giving access to all the functions in the Gamepad. You can also make the game go faster (up to 64 times), meanwhile it isn’t the best thing you can do, being the reason the animals will need constant attention from you.

They’re also different challenges in the game, being most of them easy tasks to do, being able to win certain items, bonuses and experience.  While the game is easy to use and the idea interesting, it fails in the entertainment part, offering a boring experience to the player.

The game is controlled with the Gamepad, working mostly with the tactile screen, which works perfectly. You can also move the camera with the L stick and change the zoom with the R stick. Sadly, there’s no map in the control making it mandatory to watch the Gamepad and the TV constantly. 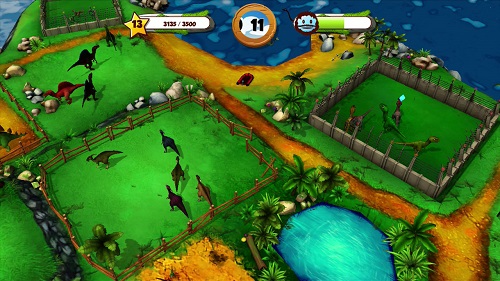 GRAPHICS AND SOUND:
The graphics of the game are actually mediocre. While other games offer nicely done 3D graphics, the style doesn’t work too well for this game and it features less detail in general. Still, the 2D graphics offered for the menus are well done.

The soundtrack is disappointing, it offers one song for the title menu and no songs are used while you’re playing, featuring only environment sounds of the animals. The voice acting and some songs feature a good quality, the rest of the sounds including a few tunes meanwhile you’re playing have an awful quality sounds that makes you decrease the volume.

PRESENTATION:
The presentation is a mixed bag: the manual of the game is well done and the interface is easy to use, still the explanation of the game when you’re playing is actually bad and it isn’t usual that a kid would want to read a long manual before starting to play.

It also fails in other aspects, such as the lack of music when you’re playing, the lack of the entertainment factor and the quality of sounds used in the game.

CONCLUSION:
While ‘My Jurassic Farm’ offers a good idea, the game suffers from an awful execution with a boring experience. The price of the game isn’t bad, but there are a lot of better options on eShop you can get for the same price.