We all love mystery games, well, not all of us but most of us do. I’m not a big fan of Hidden Object games but still, I try to play through as many of them as possible and review them for the reader’s sake. Mystery Murders: The Sleeping Palace is a recently released 3DS eShop title which can be classified as a decent hidden object game.

The game is simple, you start the game as a young lady named Sophia Fay who woke up in a castle and can’t remember anything at all, not even her name. You have to help Sophia find her way around the castle finding objects to solve mysteries. Everyone in the castle has fallen asleep and you have to find out the real cause of the magic that has put everyone to sleep. The gameplay is really simple, you go from room to room, tapping everything that you think is interesting to see if there’s an object/clue hidden. There will also come puzzles that in my opinion are fairly easy to use and require no real thinking at all. 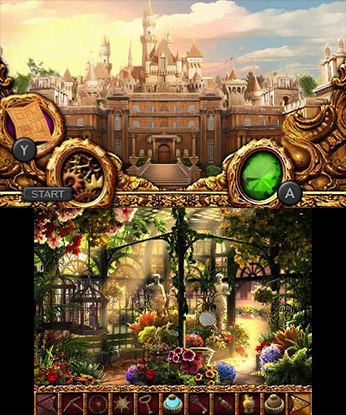 Gameplay of Mystery Murders: The Sleeping Palace for Nintendo 3DS

The game offers amazing graphics for a hidden object mystery game. Each area has been well defined with crisp visuals and great lighting. Not many animations to talk about but still each levels has been drawn out quite impressively. The sounds actually add to the overall gameplay, every dialogue has been voiced-over completely except for the cut-scenes which are completely voiceless, God knows why.

Verdict: Mystery Murders: The Sleeping Palace, may put you to sleep

Mystery Murders: The Sleeping Palace is a slow-paced, mystery game which may not appeal to everyone but if you’re a real mystery fan and know your way around hidden object games then you should give it a go. It’s available on the 3DS eShop.