Many people tend to talk about technology and their critical role in future societies. Will the future be utopian or dystopian with the continued addition of technology in our lives? A Kickstarter backed game called Neon City Riders explores a twisted, gang-ruled world that makes you rethink what the future entails.

Neon City Riders takes place in a gang-infested area, with 5 different turfs holding different levels of control. People are suffering and dying, all while gangs continue to clash without any sign of peace. How did this happen? After a peak in technological innovation, the economy collapsed, resulting in very powerful robotic pieces being scattered everywhere. Different people collect these pieces of technology and end up taking up land with newfound power. You play as a vigilante named Rick, whose job is to gather these pieces, defeat all the gangs, and bring peace to the world. 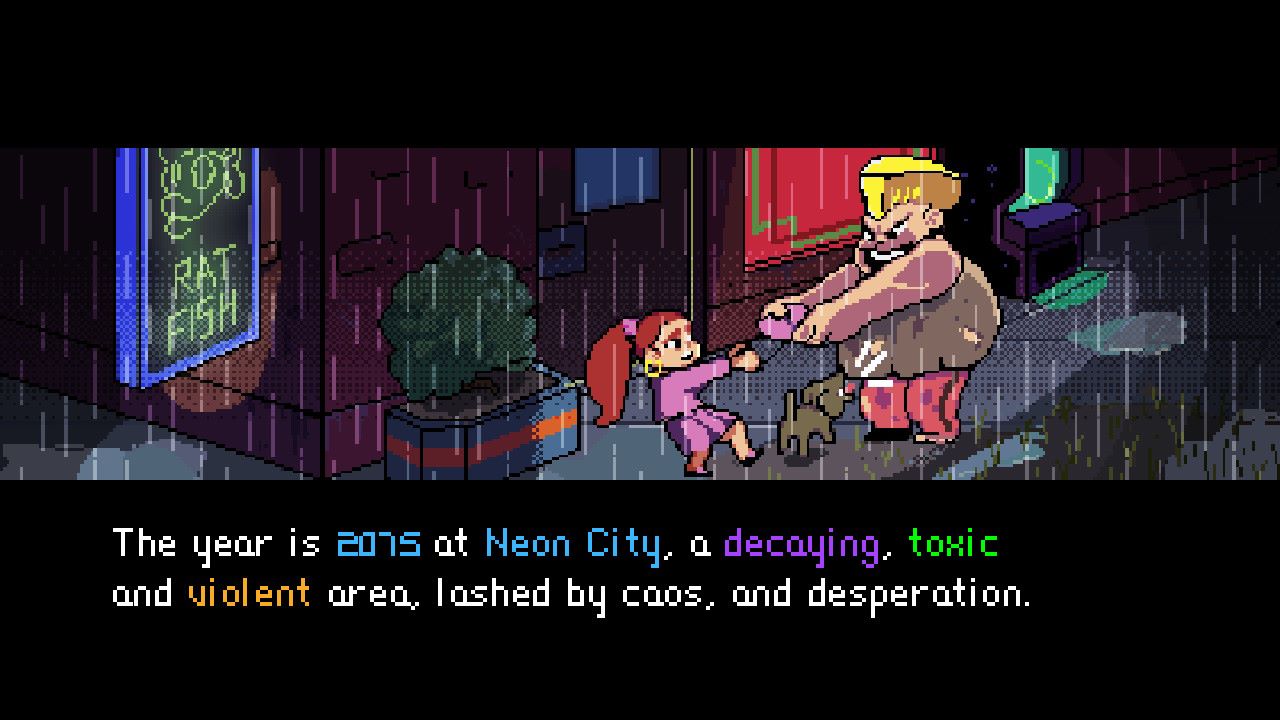 The premise is to explore an open-world style city, set in a neutral turf that’s safe and very interactive, with 4 different turfs surrounding a neutral turf. The turfs show different colors and aesthetics that make each territory seem new and different from the previous one. There is no order to pursue any of the bosses, leaving the player to explore each territory as they see fit. The game starts with a tutorial in an unknown area, getting you accustomed to the 4 technological powers that Rick has until an unknown enemy suddenly takes them away. In a rather anticlimactic scene, you have no powers beyond a simple sword mechanic. As you explore each area, the powers will build up and make the game easier.

This game has many unique enemies, all matching the common theme of each of the 4 turfs. For instance, in the electrical, music-based turf, you’ll face electric-based enemies. In the Mori forest turf area, the colors of the bosses blend with the surroundings. This level of coordination makes the gangs seem to belong to each area, enhancing the reasoning for defending what’s essentially their home. 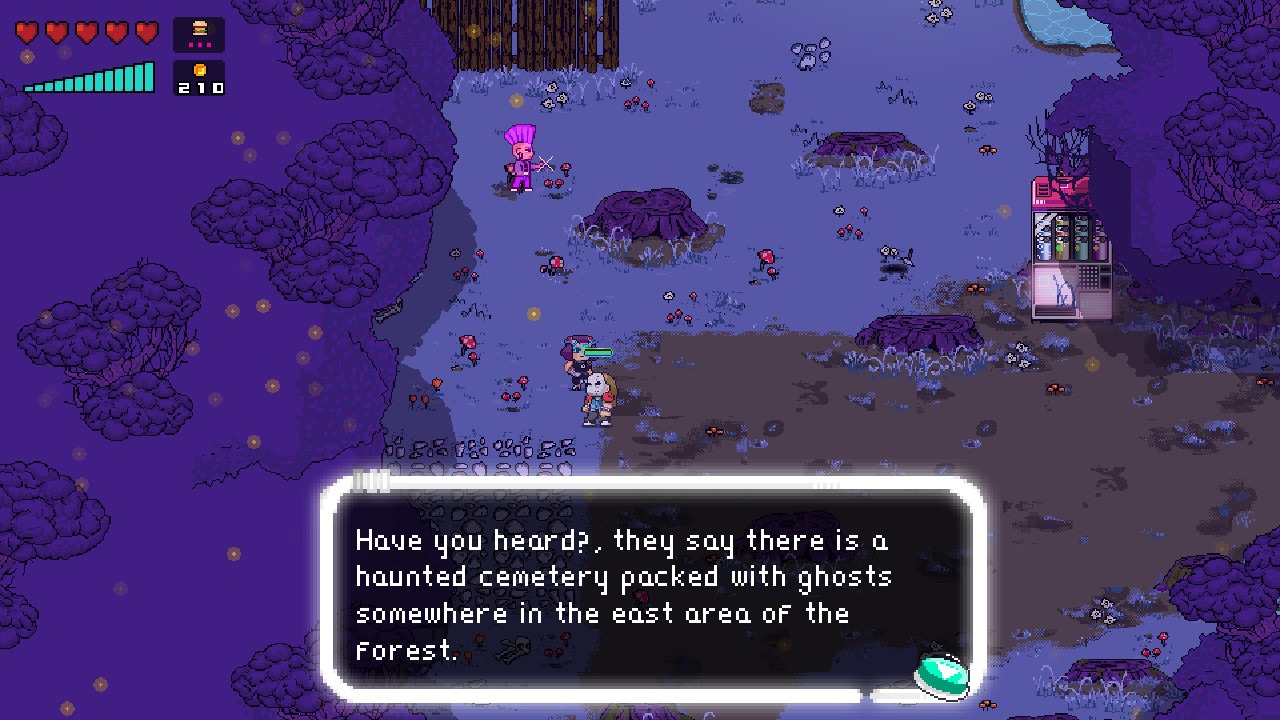 Killing enemies is initially very difficult; the sword requires a relatively close range and enemies tend to attack in groups, making gameplay very chaotic. This results in many deaths, with as little as 5 hits being capable of killing the player. However, the player has 3 food/drink items they can store which fully heals them, allowing the average player to get through more without dying. Players use a sword to deplete the enemy’s health, indicated by a mini health bar. Sometimes they’ll drop coins, which can be used to purchase food or custom clothing. The sword requires a relatively close range to the target, which means that players will inevitably get hit many times.

Figuring out the patterns of each enemy and defeating large hoards of them at once is a very invigorating experience. It can be surprising how difficult enemies can be in one area but simple in the next, mixing up the difficulty curve in a non repetitive manner. Additionally, once each of the 4 powers is captured, defeating enemies becomes more satisfying and easy. These powers consist of a dash ability that can break down boxes, a 2-second immortal power, a reflector that shoots back projectiles, and a perspective changer that makes invisible areas visible.

Aside from the perspective changer, the other 3 powers that you get make it easier to fight enemies and allow for quicker progression. It’s tough initially, but once players get the hang of the basic gameplay, defeating enemies begins to feel fun.

The game is played in a top-down perspective, with the player exploring the 4 enemy territories. Players are free to start in any territory, and the game does not advise a specific direction. The territories all contain areas that can be explores without any additional powers. If the player were to get stuck in a territory, the freedom to go to another and come back is available. Within each territory, there are boxed sections with pathways that eventually lead to a boss. Each section will either be guarded by enemies, contain locked areas that require one of the abilities, or obstacles that can easily kill Rick.

It can be easy to get stuck due to the various obstacles and challenges, but the game-play gets easier as each of the player’s 4 abilities are unlocked. Sometimes areas will be fenced, requiring you to defeat enemies before continuing. Closed off areas can be revisited once an ability has been obtained; one example being the dash ability, which allows the player to break boxes to explore new areas. Even after defeating the boss of a territory, the powers unlocked open up new parts of the territory to be explored. This creates further exploring and revisiting, especially when factoring in the variety of side quests throughout the game.

Fast travel is also a useful addition, allowing Rick to go to different territories instantly without needlessly going through other areas. These are unlocked as they are found within the game, and makes it less tedious going from one area to another.

There are also hint calls that can get you to an important area if you are stuck on the main game. Unfortunately, these hints are not only expensive, but also neither specific nor helpful, which means that the player may still be on their own if they don’t know what to do next on their quest.

Each area and boss has different music, all revolving around 80s retro music. The tracks are very catchy without being annoying to listen to on long periods of exploration. The soundtrack’s 80’s influence helps set the scene for inter-city conflict/accompanies well with the artistic direction of the game. The non-interference allows players to focus on the quests, and in times where the game gets difficult, the upbeat and catchy nature reinvigorates the player, making tough moments more tolerable.

Neon City Riders is a niche yet extremely engaging retro-styled game that is very fun to go through, especially people who enjoy action and exploration. Although the game initially is difficult, as Rick gets increasingly more powerful, gameplay becomes smoother and easier. Fighting all of the different enemies, fulfilling side quests, talking with characters in the game, and gradually getting more powers make for a very exciting game that the majority can enjoy.