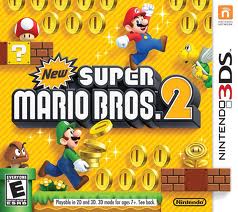 New Super Mario Bros. 2 is a side-scrolling platform game of the Mario series that was developed by Nintendo for the 3DS. The game features the Raccoon Mario power-up, and the P-Meter. The Koopalings were also re-introduced in this Super Mario Bros game, however, Bowser Jr. was not.

During the gameplay, Mario and Luigi (only one can play at a time) have the ability to dash, jump, crouch, ground pound, wall jump, double/triple jump, and pickup and throw items. In addition, both characters can collect coins and take advantage of power-ups that can be discovered during the gameplay. The game introduced new power-ups such as; Gold Flower, and the Invincibility Leaf. Old, well known power-ups are still obtainable in the game.

Note : every tower has a Reznor boss to battle.