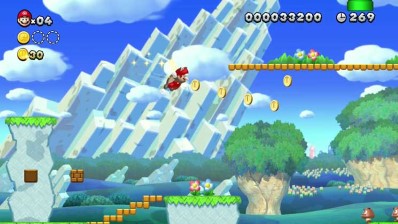 STORY:
It was developed at the same time as New Super Mario Bros. 2, I suppose it would have a different story, and ultimately, it’s distinct from the latter game to be honest.

This time, Peach was eating a delicious cake with Mario, Luigi, Yellow Toad and Blue Toad, but something happened: Bowser, Bowser Jr. and the Koopalings attacked the castle, threw away both toads and plumbers and kidnapped the whole castle instead of just Peach.

GAMEPLAY:
Like most of the 2D platform games in the Mario series, you need to move in an horizontal level going from the start to the flagpole and you’re given the ability to jump on enemies, pick coins, get power-ups and find secrets before the time runs out.

NSMBU features a total of 82 levels in nine different worlds (I’m including the secret ones) where the level design is still excellent, only that the most original ideas are present just in the secret levels and the final part of the game. 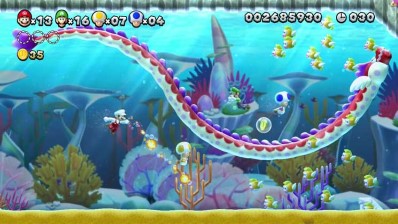 The controls are perfect, where the game can be controlled with the Wiimote, the Gamepad and the Pro Controller. With the Gamepad and the Pro controller, you can move with the Control Pad and the L stick, jump with B/A buttons and run (and also pick objects like shells) with X/Y buttons. With the L button you’re able to do the Spin Jump, use Baby Yoshi’s abilities, dismount Yoshi and by pressing L and B/A buttons, you’re able to pick frozen enemies. With the Wii-mote, you jump with 2 buttons, run (and pick objects) with 1 button, move with the control pad and by shaking the Wiimote, you can  do all the stuff I said with the L button.

For the co-op mode, the Gamepad can’t be used to control a player but it can be used to help the players. When you touch the screen with the stylus, you can create blocks and distract enemies (called Boost Mode). You can also find a Boost Star (a new item exclusive of this mode) that allows the player to destroy enemies and blocks.

Talking about items, there are two main differences between the handheld games (NSMB and NSMB2) and the console ones (NSMBWii and NSMBU). The first one is the the power-ups and the other one is the item system. In the handheld games, you can carry an extra item like Super Mario World or Super Mario 3D Land, however, in the console games, it’s like Super Mario Bros 3, where you have inventory that can be used in the level map. In this game, you can keep a total of ten items.

The game introduces the Super Acorn, a power-up that allows Mario (and the others) to glide, make a higher Spin Jump and also a small extra jump when gliding. The Flying Squirrel is like a mix between the Tanooki Suit from SMB3 and the Cape Suit from SMW. There is also another object: the P-Acorn. It’s the Super Acorn but with a special effect: you can fly during one level and it can be extremely helpful in hard levels. 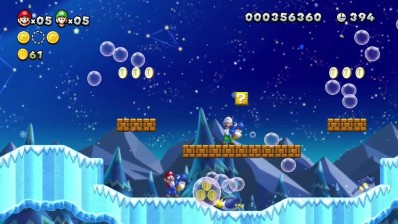 Normal elements are still present in the game such as the Super Mushroom, the Fire Flower, the Ice Flower and the Starman. NSMBU also brings back items from the NSMB series inclusive of the original title. There is the Mini Mushroom which has been upgraded: now you can run on walls, something like the triangle block in Super Mario World. However, an interesting question is what happens with both items from New NSMB Wii? Well, the Propeller Mushroom and the Penguin Suit are back, but as hidden items where the player can get them after finishing the game. The Toad houses are also present where there are two distinct varieties, where one will make you win lives and the other one wins you items.

Similar to the other three games in the series, you can get five stars in your save by completing the game at 100%. When you play with NSMB2, by finishing the level in a certain time allows you to access the Rainbow levels. This time, the same trick works in a different way: if the last two numbers are equal, you will get an item, where it depends on the number. This is a nice way to get items when you’re in trouble.

There are another two new additions to the game: Nabbit and Baby Yoshi. Nabbit is a thief that is making chaos in the Mushroom Kingdom. Sometimes, you will be able to catch him in the first seven worlds (it’s actually like a race). If you succeed, you will get the glorious P-Acorn and this is the only way to obtain it.

NSMBU doesn’t make a bid use of the Adult Yoshi, but it does so with the Babies Yoshi. They’re able to eat almost any enemy on your patch and, depending on its color, there is also an ability: 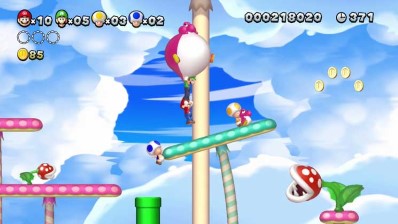 This game has a lot in common with Super Mario Bros. 3, the P-Acorn, the Koopalings, the map and inventory system, the Toad houses but there’s something more which are the enemy battles. You can find enemies in the map (Piranha Plants, Penguins, Goombas and Hammer Bros) that play in the same way: you have one screen with them, you need to beat them all and you have an item as a reward.

The last thing to add are the extra modes:

GRAPHICS AND SOUND:
The graphics of NSMBU are pretty nice, and featuring 60fps at 720p, this is the first Mario game in HD, where the game features some new and upgraded textures and models. Sadly, a big part of the graphic design and some of the elements are recycled which makes the “new” in the title an irony.

The game also lacks anti-aliasing, mostly in the backgrounds, where for being a launch title for a new system that promises better graphics, it’s extremely disappointing.

The soundtrack is fully recycled which makes it a big and lazy move from Nintendo, more if we count the handheld version which was released a few months before the console one. There is a small change in the music if you’re using any of the two Yoshi: an irritating bass appears for the adult Yoshi and a cute but repetitive singing for the baby Yoshi one. 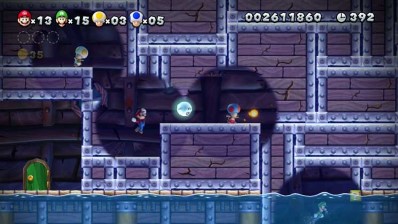 Still, when I said almost perfect, there is one main flaw: the recycled material of the game. Meanwhile the game presentation of the game is complete however, the laziness cannot be forgiven.

There isn’t a lot of innovation with the Gamepad either, but the game got an interesting idea to work, where something similar was made for other games, like Rayman Legends.

CONCLUSION:
The main flaw of NSMBU is the recycled material however, it is an excellent game for the system offering a giant world and a great level design keeping the 2D platform formula attractive. It isn’t a must-have for the console, but it can be a lot of fun playing alone or with others.