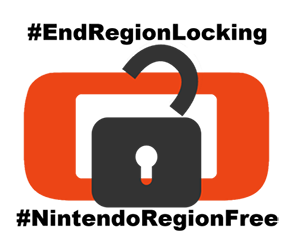 Attention gamers, we have been heard! Nintendo’s upcoming next gen console, currently going under the name “NX” will probably be region lock free! During a Q&A session the topic went, once again, to region  locking. Nintendo is one of the few companies who still use this old and, I think most of us will agree on that, annoying way of controlling their distribution. When asked about Nintendo’s current stance on region locking, Nintendo president Satoru Iwata answered that while he believed it was not realistic that the region lock would be removed from the 3DS family or the Wii U as there were “challenges”, he was optimistic about the NX project. He said that the customer feedback has been heard and that they were having an internal research on possible problems realising a region lock free console. This news is slightly surprising since earlier Nintendo firmly held onto its region  lock policy saying that there were reasons behind it.

A majority of us have been annoyed by the region lock. So annoyed in fact, that petitions popped up all over the web in an outcry for Nintendo to stop. Not only does it make game trading and buying games on the go harder, it also means that many will never be able to play the games they love due to region exclusivity. A region lock free NX would mean exclusives could be bought in one region and used elsewhere. Who’s ready to play a Japanese Indie with me?

While we still have to wait for the official English translation, the unofficial translation of the Japanese transcript reads as follows: “Removing region-locking from current game machines presents various issues, so we don’t consider that to be very realistic. However, regarding NX, given the customer feedback and proposals from the market, while nothing has been decided yet, we’re currently investigating internally what problems there would be in realizing it. You can think of that as the current situation. I understand your desire, so I’d like to look at it optimistically going forward.”

The official English transcript should appear here when ready: http://www.nintendo.co.jp/ir/en/library/events/150508qa/03.html

The official Japanese transcript can be found here: http://www.nintendo.co.jp/ir/library/events/150508qa/03.html