Lady Palutena joins the party as a playable character in the upcoming Super Smash Bros. game for Nintendo 3DS and Wii U. If you weren’t aware, Palutena is the Goddess of Light and the rightful ruler of Angel Land from Kid Icarus games. 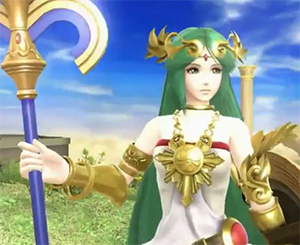 She was part of an animated video with Link and Pit. Some gameplay footage of her were also revealed during Nintendo’s E3 Digital Event.

Some of her skills are :

See the animated video and some of her gameplay footage below :

Dark Pit was also hinted as being in the game during the video (it’s currently unclear if he will be a playable character or not).