Paper Monster Recut is another platformer game you will discover in the Nintendo Wii U eShop. Its experience is quite different from other platform titles thanks to its own charm.

The gameplay mechanics are normal: evade or defeat enemies, collect stuff to get more life and jumping between platforms in order to reach the goal. Meanwhile the level design can feel repetitive at times, it can be pretty: what about driving a submarine or using a jetpack? Maybe an old Western, a Halloween or a Space based level?

Each level includes its own personal record, three golden clips and one button, resulting in limited replay value. The buttons also unlock three mini games, and meanwhile they are basically horizontal runners, each of them follows their own rules (sorry, I’m not spoiling). They are actually fun and adds more replay value. 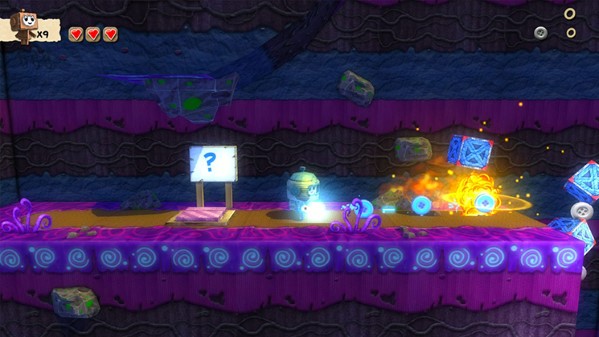 The controls are great (still there is a bug I will mention soon) and the difficult is more aimed at casual gamers, lacking some challenge, however, it manages to be a good experience overall (like actual Kirby games for example).

As a brilliant game, it also brings a big shadow: bugs. There is a large quantity of them, but I will ignore the ones that need to be found as well as the uncommon ones.

During half of the game, it is actually possible to lose up to four lives instead of one when falling (into a hole or lava for example), the jetpack sometimes stop working until you refill it and the last boss will be broken if you get out of the route. The hit detection can also be poor sometimes.

One of the reasons why Paper Monsters Recut is unique is because of its graphics: everything looks like it was made of paper. Still, it isn’t just a good work of textures, most of the models actually look like they’re made like papercraft objects, featuring well made models, good animations, detailed backgrounds and a lot of varied themes for the different worlds. 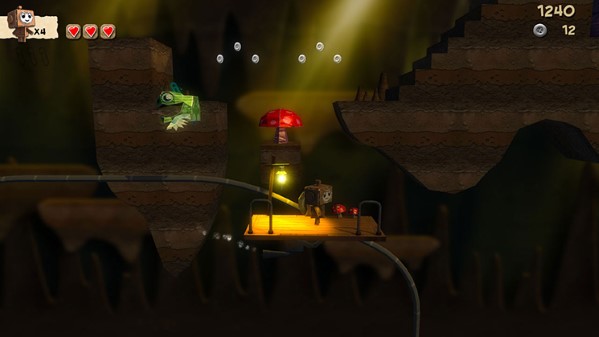 The experience is usually smooth during all of the game, however, there are two negative aspects: the distance draw of the enemies is inside of the screen’s camera and not outside (it is easy to see them appear and disappear when they are close to the borders) and also, the level Puzzling Pyramids suffer from a high quantity of lag.

The soundtrack is great, featuring some songs that will actually get stuck in your head, and the quality of the songs and sounds are also good. Sadly, the main character’s voice acting is quite limited, being repetitive with the time.

Even with the presence of bugs, the presentation is pretty nice thanks for the title’s charm and content presenting a good quantity of levels and reasons to get back to the game. I still found the lack of manual and Wii U Pro Controller’s support to be bad.

Conclusion:
Paper Monster Recut is a solid platformer game with wonderful graphics and soundtrack, where the only main flaw present in the game is the high quantity of bugs. It won’t affect your experience a lot, however, it will give you some inconveniences. Once the patch is out, it’s definitely a must-buy.

An update has been confirmed in order to fix problems.