One of the most commonly seen criticisms of detective games is that they want to point the player towards one specific answer with a specific piece of evidence to corroborate. Not only is this frustrating, but also forces you to think the exact way the game wants you to think, leaving no other interpretation. Paradise Killer takes this criticism and throws it out. Created in 2020, the first person open-world detective game lets you gather as much—or as little—evidence as you like, and come to your own conclusions about them. The only person you have to convince is the Judge.

Paradise Killer is set in a world run by The Syndicate, a group of immortals who are in search of the perfect world. Taking place on the 24th Island Sequence, the inhabitants of the island are preparing for their world to end and for the immortals to join each other for the creation of a new world; Perfect 25. On the eve before the end of the 24th Island Sequence, it is discovered that the members of the Syndicate Council have been murdered with a suspect in jail. The Judge of the 24th Island Sequence brings back the previously exiled Lady Love Dies, and tasks her with getting to the bottom of the murder and finding out if the suspect is guilty, or if the fault lies with one of the other colorful characters who inhabit the island. 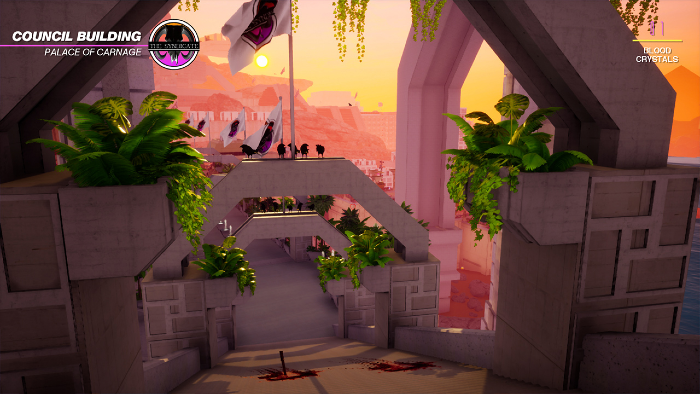 Controlling the ‘”investigation freak” Lady Love Dies, Paradise Killer throws you headfirst (literally), into exploring the world of the 24th Island Sequence. Clues are littered around the island, and all suspects are available to speak to from the off. There’ll be a lot of going back and forth, as you’ll want to question suspects multiple times depending on the evidence you find. Unfortunately, the island can be confusing to navigate at times, and it’s not until the final hours of the game that I actually got a clear idea of where everything was and how to find it easily.

Fast-travel is available from the island’s ferrywoman, Lydia Daybreak, though this will cost one blood crystal per trip as well as having to spend on unlocking travel points. Blood crystals are found throughout the island, but you’ll want to spend them sparingly as you need to use them to upgrade Starlight, your companio. They’re also used in case you want to purchase any information from the information broker, Crimson Acid.

You can bring up a map to see where the suspects are and how far away from them you are—but sometimes this is a little unclear as they may be out to sea or underground. There’s also a map inbuilt in Starlight—but this is minimal at best, and it doesn’t account for terrain or pathways so can make navigating a little tricky at times.

The island itself is vast, and Lady Love Dies has a lot of ground to cover. It’s a testament to the developers that each area feels distinctive, and has its own feel, along with its own theme song. Sometimes getting from A to B can seem a little difficult—some terrain is climbable, some is not and what seems like it should be often isn’t. Lady Love Dies can’t swim, but she also doesn’t take fall damage—so oftentimes hurling yourself off a cliff is the best way to find new areas. You can pretty much get anywhere you want to go though, if you can see a location then generally speaking, you can go there—if you can find the way.

The limited fast travel isn’t necessarily a bad thing, though it can feel monotonous to take the same routes again and again. There are some clues that can only be found off the beaten track, so trying to find a shortcut may lead to you to some vital evidence. That said, once evidence has been found there feels little need to revisit some locations again and again.

Lady Love Dies’ faithful companion is Starlight – her laptop. Collecting evidence will upload it to Starlight, where it will file it according to which suspect, motive, or alibi it fits best with. Any unfiled evidence is also collated, waiting for you to either discover the link that it needs, or hint that it’s possibly not as useful as first thought. Upgrades are available for Starlight through the game, though perhaps somewhat difficult to find, and they add more Glyphs needed to hack Nightmare Computers found across the island, which will provide various pieces of information and allow you to enter previously locked areas. 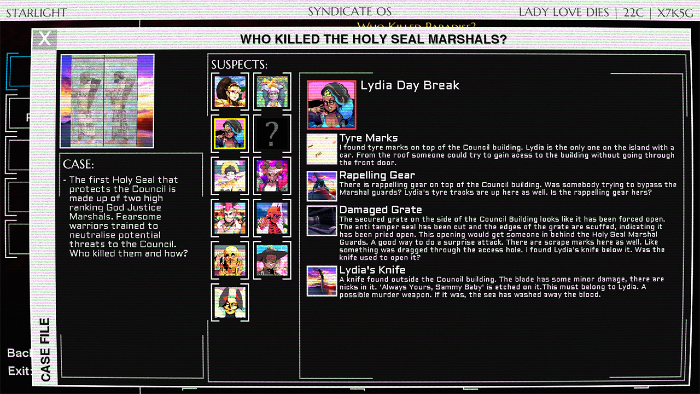 Hacking Nightmare Computers is a fun and enjoyable puzzle throughout Paradise Killer, providing a brief relief from trudging the island and looking for evidence. Breaking the code is done by showing a picture that you need to recreate, and a series of shapes you can use to do so. Whilst these start off fairly simple, the more Glyph upgrades you obtain, the more challenging they become, but none impossibly so. 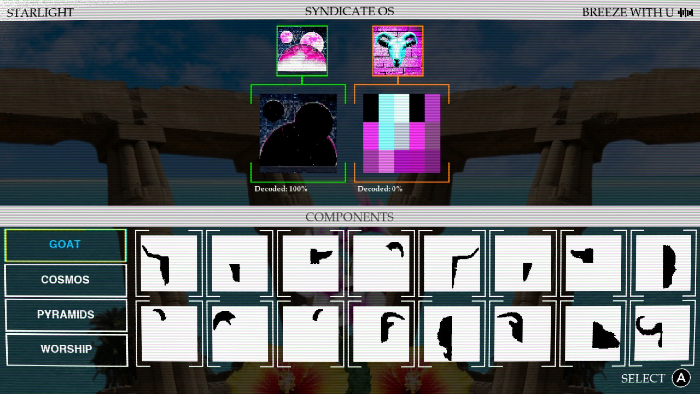 As the 24th Island Sequence, there’s a lot of history in the Paradise Killer world and a lot of established relationships between the immortal characters. Through your investigation, you’ll learn more and more about the previous lives the characters have lived, and how the Syndicate operates as a governing body. There’s some really interesting questions about morality raised, and this background story makes Paradise Killer have a lot more interest than just a random detective story.

As you interact with suspects, you’ll see more of their relationship with Lady Love Dies, and have the opportunity to “hang out,” which will ultimately improve your relationship and may lead to that suspect giving you a new piece of evidence. This may also lead to you making a different decision in trial – have you warmed to another character so much you’ll avoid bringing them up, or do you find someone you hate and want to pin everything on? 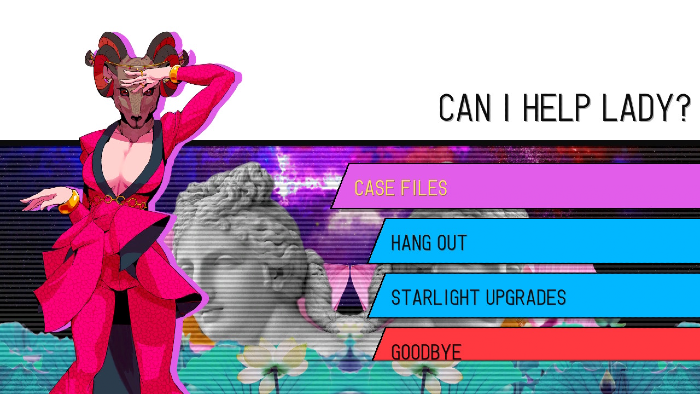 There are also a couple of romance options available, though these felt wholly unnecessary and added nothing to the plot or investigation.

The characters themselves are larger than life, colorful and strange, much like the whole world of the 24th Island Sequence. Everyone has their role on the island, and some do theirs better than others. There’s a lot of dirt to dig on the island, and finding out the nuances and backstories of each character is one of the most enjoyable parts of Paradise Killer. There is voice acting for the characters, however this is repetitive and hearing the same lines over and over can get quite grating.

Once you’ve collected as much evidence as you can and have your argument formulated in your mind, you can approach Judge for the final trial. It’s important to note you can do this at any time in the game, so there’s no trigger point of obtaining a certain piece of evidence or seeing a certain scene which will indicate it’s time for trial as you might see in other detective games. 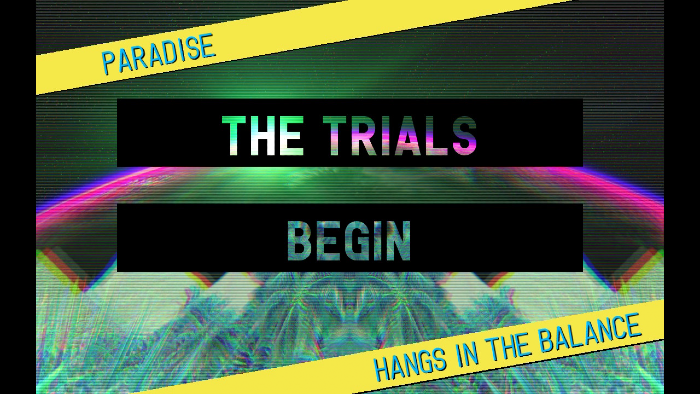 Judge will ask Lady Love Dies to confirm who her suspect is for various crimes, and it’ll be down to you to accuse someone and provide evidence to back up your claims before Judge finds them guilty or not guilty. There’s seemingly no right or wrong answer, as long as you can support why you accused someone, then that’s all you need.

Paradise Killer is as difficult as you want to make it. Do you want to go into the trial with minimal evidence and have to cobble together your argument? Fine, do that. Or do you want to get every single piece of evidence available, working out where the hidden evidence is and hacking all Nightmare Computers? You can do that too. Paradise Killer really is down to you to get to the end game.

Paradise Killer is pretty special to look at. With 3D environments, and 2D characters inhabiting them, the game has a really standout visual to it. Some locations look deceptively simple, but there’s so much to them when you get down to exploring them fully. The exciting and detailed locations throughout the 24th Island Sequence really compels you to scour every inch of the island, soaking in the sights if not for evidence collecting purposes.

The soundtrack to Paradise Killer is exceptional. It majorly gives an island vibe, and manages to feel nostalgic and futuristic at the same time, really cementing the ‘familiar yet different’ feel that the entire game manages to convey. Traveling from one area to another within the island will trigger certain tracks, and this feels like a seamless and smooth transition between songs. The songs themselves really add to the mystery of the game, ramping up the energy when needed and creating a level of drama and tension at key moments.

As there’s a multitude of answers you can present to the Judge in the final trial, and a host of evidence you can use to support your claims, there’s a whole legion of conclusions the game can end in, and a lot of reason to replay. Whilst the evidence gathering process will largely remain the same, the end trial can be different every time you play, and there’s always the chance to go into the trial with more or less evidence than you previously had. 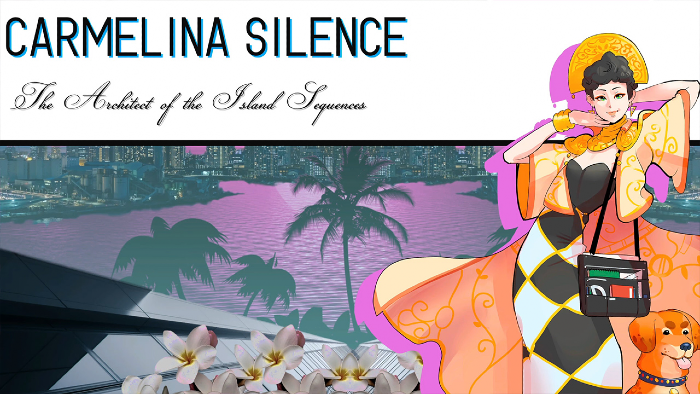 Paradise Killer is a beautifully presented first person 3D detective game which is a breath of fresh air within the genre. It doesn’t force you to conform to its way of thinking and instead allows you to come to your own conclusions with the evidence you collect. With spectacular visuals and a soundtrack that will blow you away, Paradise Killer is a wonderful way to spend a few hours. It takes a little while to get your bearings, but once you’ve got the island mapped out, the 24th Island Sequence is a fun and exciting place to explore with a host of interesting characters to interrogate.

Jade has been gaming since the days of the Master System 2, although she hasn't got much better at it since. She can be found stealing hugs from her dog and crying over cute anime boys.