The first time I heard about this game, I honestly thought it was a ping pong game for the Wii U. Later down I saw a couple of screenshots and watched some gameplay from its trailer and then assumed it was a compilation of arcade games. To my surprise I was wrong. So what is Ping 1.5+? It’s basically an arcade style puzzle game with the objective of shooting a cube after aiming and trying to reach the oranges of each (non-boss) level.

Gameplay, Controls and the Kuri

Ping 1.5+ consists of 12 worlds each containing 8 levels and an additional boss level. The game may seem only like a challenge to overcome in the beginning, however, after progressing through some levels and defeating some boss levels, you will soon discover that ‘fun’ is present. 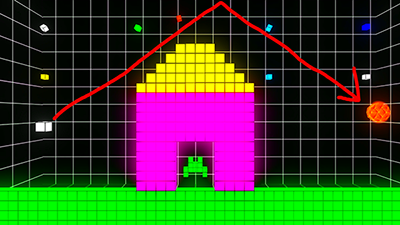 One of the simple levels of Ping 1.5+ for Wii U

Levels do not stay the same, which is a good thing because it could have quickly gotten boring. More challenging elements are presented as you progress further in the game, boss battles are nothing less than interesting, and it feels like there is an evil mastermind behind the game who wants you to lose (huehuehue). Let’s not forget that you will be spending a majority of your time using only the Wii U GamePad as the television’s display can get a little annoying to watch while using the stylus. Using the stylus is not the only way to play the game (which might make the television’s screen have a purpose), however, it is the easiest and the method I recommend. 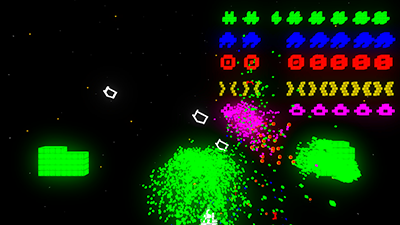 One of the boss battles in Ping 1.5+ (Space Invader style level)

The biggest downfall to the game is the lag. Yes, lag is present in some levels of the game such as World 8 and World 9 (boss fights and certain levels with a lot of moving content on the screen. For example, when bombs explode and pushes the block walls away).

Graphics, Sound, Manual, Navigation and all that other stuff

The graphics aren’t that bad and it does give the arcade type of experience while playing. There is room for improvement in the orange’s design though. The soundtrack also isn’t that bad. You’re not going to get annoyed at the songs that are playing during the levels. Some can even get you pumped up.

The screen that shows you the list of worlds that you have unlocked could have improved a bit in the navigation department. Having the option to zoom out without being required to scroll to the last world on the screen should have been possible and if it’s possible, it’s pretty difficult to discover how to achieve such a thing. 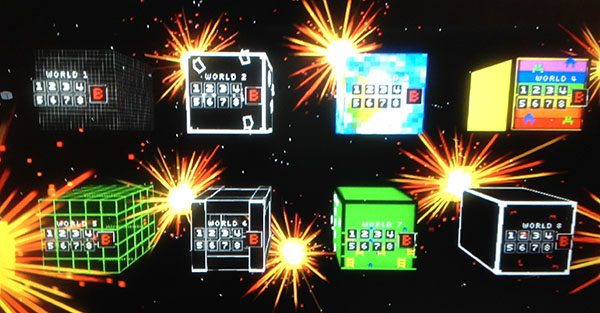 The game’s manual explains the details about Ping 1.5+ pretty well. From ‘the story’ to ‘instructions about how to play’ to ‘parental control information’, everything should be explained in it. The story from the manual is good and you’re not going to get bored while reading, however, I felt that it should have also been included in the game itself when you first begin to play as people do miss the game’s manual on the Wii U.

Do I hear Replay Value?

Sure, you can play the levels again, but on a scale of 1 to 5 rating this game’s replay value, the number will be 2. As a matter of fact, the boss levels may be the only levels that you might want to play again after finishing the game. Unless, of course, you want to challenge a friend to see who can beat the game the fastest.

If you’re looking for an affordable game with a lot of challenges to overcome, you should definitely consider purchasing Ping 1.5+ from the Wii U eShop. The game costs $4.99 US which isn’t that bad for the contents it offers. It may feel like a game just with levels to beat when you start off playing, however, it gets fun later down during the gameplay.