To become a Pokémon and explore various dungeons, fighting and befriending other Pokémon and creating your team; that’s what the Pokémon Mystery Dungeon series has always been about. With no exception, Gates to Infinity made its way to the Nintendo 3DS as the first game of its series on the console while offering new features, an interface and a new story concept.

GAMEPLAY
As you begin, you’re given the choice to become one of the five available Pokémon (Snivy, Tepig, Oshawott, Axew and Pikachu) therefore being sent into a world inhabited by only Pokémon after a mysterious voice tells you to save that world. As you meet up with your partner Pokémon, you help out other Pokémon and build your paradise while trying to find your purpose in that world. The main story is well organized, although not as interestingly complex as one would expect.

The basic gameplay factor that revolves around the game are dungeons that consist of randomly generated floors and Pokémon, items and treasure which are mainly called ‘Mystery Dungeons’. Each floor’s layout is generated differently every time so exploring the dungeons make it rather fun, although the large size of a floor can make exploring quite tiring to some who want something a bit more fast-paced. Regardless, exploring dungeons are still enjoyable alongside with the atmosphere and its other aspects. 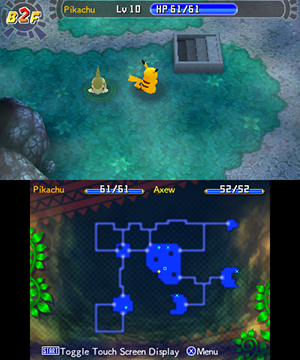 The controls of the game are very simple, making it practically easy for anyone to pick up and play. Many of the gameplay options are also given to the player for him/her to adjust to his/her play style. However, one thing which is the game’s text speed, cannot be changed, which is rather medium-slow so going through a bunch of dialogue can be time-consuming. The 3DS’s touch screen mechanic is barely used in the game besides from a few menu layouts and a mini-game, making its potential left out although you probably won’t be expecting to use it at all much in the game.

SOUND
Sound and music are also very clear cut. Given that you’ll be exploring through many places, music is very abundant. Although they might not be the catchiest and is sometimes actually repetitive in larger dungeons, the music is very fitting and clear to the situation. DLC dungeons also bring together a few old music tracks from past games which can be played building a certain facility in your Paradise, which also plays music in the game as well.

CONTENT
Throughout your adventure, you’ll be given many features and stuff to help you, such as options like team attacks, skills, and powering up your moves, making dungeon exploring great. Using the Magnagate feature to explore special dungeons using the Nintendo 3DS Camera. Having your own Pokémon Paradise to build many facilities, shops, and mini-games also make a great aspect in the game. Even with purchasable DLC dungeons to expand your game. Having a multiplayer mode to play with friends locally in Companion Mode to fight bosses is also great to have as well. One thing that quite ruins it is the post-game – after finishing the main story, there isn’t much adventure afterwards other than continuously doing jobs and expanding your paradise. There aren’t many Pokémon to befriend either aside from up to 144 Pokémon approximately, so given that the story isn’t much lengthy, you can easily get bored after-game. 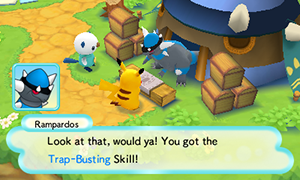 CONCLUSION
Combining the game’s graphics, music and gameplay as well as its general aspects, it really makes PMD: Gates to Infinity a great game in those terms, but it could have been better with the content, which was rather short and had the potential to improve as well as some other points in the game. There were much more improvements needed than I had anticipated which brought the game’s review score down.

Pokémon Mystery Dungeon: Gates to Infinity gets a 6/10 overall.