Pokemon has always been a hit, no matter which series, which generation, or which specific game. Even the TV show and movies were hits. However, the games were always the most popular. Somehow the creators of the Pokemon video games, Game Freak, Creatures Inc., and their publisher Nintendo, always find a way to make the games maintain their feel and play style whilst adding new features and ways to play every generation.

HISTORY AND GAMEPLAY:
With the newest generation of Pokemon games, the sixth generation, the makers of Pokemon manage to implement a very new graphics style and lots more new features. While Pokemon Omega Ruby is simply a remake of Pokemon Ruby from the third generation of games, it still has the feel of a new game as you play it.

NEW FEATURES:
When Pokemon X and Y were announced as a part of the new generation (the sixth generation), the releases included many new features. A lot of these features continue onto Pokemon Omega Ruby. Things such as Pokemon Amie, which allows you to play with your Pokemon and grow their affection and connection to you. However, there is a few completely new features in Omega Ruby (and Alpha Sapphire) which were not included in the previous games of X and Y. These features are things such as the Cosplay Pikachu, which are basically Pikachu, but dressed up a bit. They are basically just regular Pokemon who look different.

There is also the new Secret Base aspect of the game. This is where you can find secret areas and claim them as your own, which in turn allows you to decorate the base as you like. However, you can only have one Secret Base active at a time, which isn’t a great addition. Secret Bases in general is at least something new, and there is always downsides to great additions. 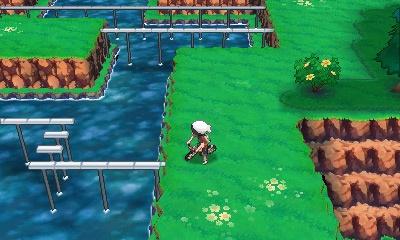 The release of Omega Ruby does not include many new Pokemon, as said before, it is mostly a remake of Pokemon Ruby. However, it does include new ways to use Pokemon such as Mega Evolution and Primal Reversion. These features allow for even stronger Pokemon and new ways to grow them.

GRAPHICS:
With the sixth generation of Pokemon games, there is a massive improvement in graphics. As they are made specially for the Nintendo 3DS, Nintendo is going with a 3-Dimensional aspect for the graphics. The improvement is outstanding for anyone who has played the previous games. It isn’t simply walking in four directions anymore, you can walk diagonal for the first time ever in a Pokemon game. It isn’t just over-the-top camera, either, there are many scenes where the camera will actually change, giving an extremely new feel to the play style.

Overall, if you love the original Pokemon Ruby, you will only find even more happiness in Omega Ruby. Same game, more features, better graphics.

AUDIO:
While Pokemon games are mostly known for their soundtracks, they don‘t especially have the best sound effects. Back in the days of the original Gameboy, the Pokemon you encountered screeched and that was that. However, with the Nintendo 3DS, the sound card gives the developers of Pokemon a much wider potential for sound effects. The Pokemon actually say their name or at least partially say their name, and there are multiple sounds for each Pokemon.

Aside from sound effects, the soundtrack and background music of Omega Ruby is very entertaining and exciting. Whether you’re in an intense battle with a legendary Pokemon, or you’re biking through the tall grass near Slateport City, the music will adapt to the situation. This is most likely enough to entertain most players while they do their playthrough.

STORY:
The story of Pokemon Omega Ruby is difficult to describe without spoiling anything; however, I can say Pokemon Omega Ruby does a much better, and much more simple job at describing the story than Pokemon Ruby did. Perhaps this is simply because the game catches the player’s attention more with its ‘new style’, or perhaps they truly focus on the story more. 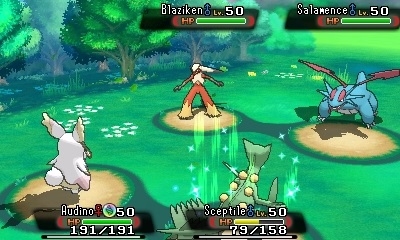 As many people will realize by looking at the cover of the game, the game spends a lot of time focusing on capturing the Legendary Pokemon Groudon. However, the game does not simply finish after you capture him. It feels like you have been playing for quite a while, and just when you think it will end, it gives you even more story! This is the type of game you actually want that from.

Team Magma and Team Aqua are the two groups you mostly encounter in this game, and they each have different motivation and goals to reach. As you play, you encounter members from each organization again and again until you finally figure out what they truly want.

SUMMARY:
Whether you have played Pokemon Ruby or not, this game is absolutely a game you should try out. There is so much to encounter and experience, you will not regret it. Whether it’s the new style of amazing graphics, the new aspects of gameplay, or even the old classic Pokemon you can encounter, you will have fun playing this game.

RATING:
While this game is absolutely outstanding in pretty much every aspect, it feels like it can have a little more improvement. Things such as only being able to have one Secret Base really disappoints some players. All in all, this game is definitely one of the most developmentally-advanced games on the Nintendo 3DS, and you should absolutely think about picking it up.