Pokemon Tretta is an arcade game with a rather simple concept, inserting a a token, commonly known as a Tretta, in the machine which then scans it. Players can then compete in 3 vs 3 battles, and attempt to capture additional Pokemon (tokens) if they win.

However, while up till now it was only available in Japanese arcades, Pokemon fans will soon be able to play it from the comfort of their home. Indeed, Marvelous AQL has developed a 3DS and 3DS XL version of the games, with a release date slated for August 10th.

Named ‘Pokémon Tretta Lab’, the game will keep the principles of the coin-operated arcade machine, with an accessory, the Tretta Scanner, that can be attached to the console and with chips replacing the tokens. In addition, the game’s software will also be available from free from the Nintendo eShop. 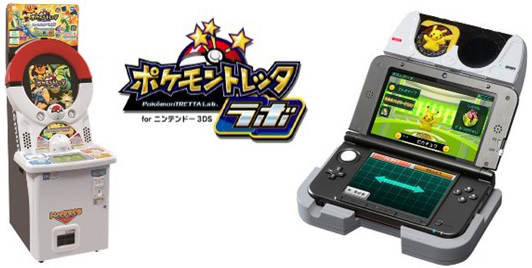 According to Serebii, Pokémon Tretta Lab, priced at 3800 yen, will also offer Eevee, Mewtwo and Lucario for free, while players who pre-ordered the game will also get a free Pichu.