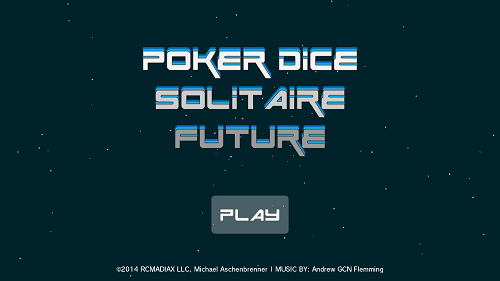 GAMEPLAY:
This is a new HTML 5 game from the same developer of Blok Drop. This time it’s an interesting way to play poker… In short terms, it’s a single player poker game played with dices, and here’s the reason for the title (if you thought it was going to be three different casino games, sorry to bring bad news).

The combination is done with five dices in the screen and you are allowed three chances (turns) to toss them. You can also block dices for the next turn which will help you to get a combination. They’re six numbers (1-2-3-4-5-6) and two colors (pink for odd numbers, green for the par ones).

The combinations possible are:

There are also different bonuses. An example is when you have one green chip in every category or for having the four chips in one category. Sadly, I was never able to have all the 32 green chips as to do so, it’s quite the challenge.

Poker Dice Solitaire Future (PDSF for short) can be a simple game but it’s highly re-playable and works perfect however, there are a few things missing (it’s in the presentation category). Finally, the game is fully played with the Gamepad and furthermore, the stylus and the controls respond very well. 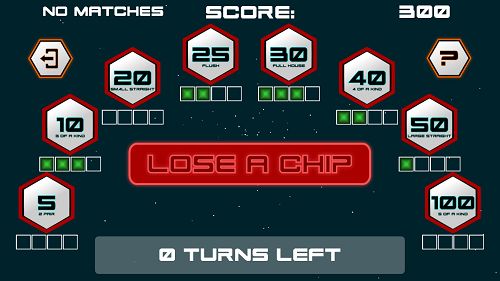 GRAPHICS AND SOUND:
This game presents a futuristic and minimalist style, presenting a nice looking interface. On the other hand, it feels quite basic.

Also, PDSF presents one relaxing song for the entire game (and like I usually say, you can still listen to your music once you get tired of it) and a few well done sounds.

Also, you aren’t able to see your latest high score unless you beat it. Lastly, the replay button would also be nice when you’re playing if you want to start again, without needing to quit the game screen but rather, you can go to the title screen and then start playing again. Furthermore, the interface is user friendly and learning to play the game won’t be too hard at all.

CONCLUSION:
It’s an interesting game that will offer a lot of fun for those of you who love casino games. It has a friendly interface but sadly, the presentation should have been a lot better. On another note, it looks attractive and comes with relaxing background music.