It’s time to review one of the launch titles for the Nintendo 3DS, at least in Japan. This is also when the Layton series jumped from 2D to 3D, so let’s see if it works well or not. 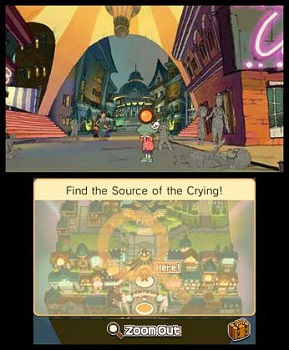 GAMEPLAY:
Professor Layton and the Miracle Mask is a puzzle game where everything is about exploring places, following the story and resolving puzzles. That’s the core gameplay.

Like I mentioned earlier, the game is based on puzzles where most of them are played with the tactile screen. They can be pretty varied, including mazes, logic, maths and visual puzzles for example. Every puzzle will give you a certain quantity of picarats, the more it gives the harder the puzzle is.  If you fail the puzzle, you will lose some picarats, therefore you should be careful and check before submitting because the higher quantity you get, the more content you will unlock once you finish the game.

Some of the puzzles can be very difficult and you may need Layton coins to provide you with the help that you need. Layton coins can be used to purchase hints (each puzzle has a total of 3 normal hints and one super hint) allowing you to finish the puzzle. Meanwhile using them won’t allow you to have a perfect save, at least it won’t make you unable to unlock content like the picarats.

The game features a lot of content making it pretty long, featuring a total of 150 puzzles (14 of them after finishing the game), where I suppose the average time should be around 20 hours. The main game also contains three mini-games with more puzzles: 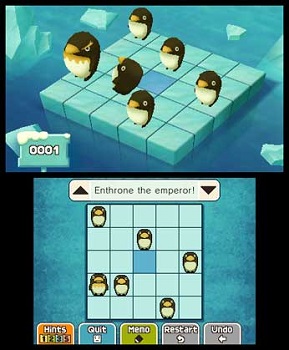 If that wasn’t enough, the game also has 365 downloadable daily mini-puzzles (all of them are unlocked right now) that will give you a good quantity of hours.

When you’re not solving puzzles, you will be exploring places. That means searching for hidden coins or puzzles, talking to people, or just following the story itself. The tactile screen is used to move the camera in the upper screen and it also shows the map and gives you access to the menu. The upper screen is used for showing conversations and for finding elements, it can sound confusing, but its interface is really easy to use.

As for the story, it’s pretty good, however, the key parts are quite predictable. 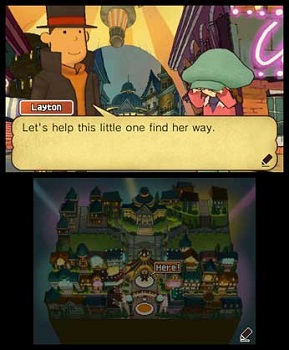 GRAPHICS AND SOUND:
As a launch title, it looks really great and there is no lag. It’s 3D effect looks really nice (there’s a small ghost effect when it’s switched to the maximum). The game features 2D backgrounds with small 3D objects, the models used for the characters are on 3D featuring magnificent animations and like previous entries, videos for explaining the story.

Considering when it was done, there isn’t a lot of stuff to criticize, still some black borders  aren’t perfectly done in some of the models. It’s also the first entry with 3D graphics, it can also be shocking for those who played the DS titles due to it using a different style for the models.

The soundtrack of the game is classy and excellently done, however, it can be repetitive sometimes. The voice acting is great as well as the quality in general, which is normal for a Level-5 work. 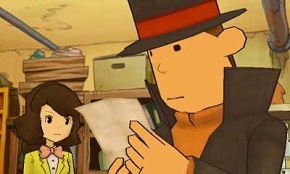 PRESENTATION:
The presentation of the game is outstanding, featuring a lot of content, great controls, good graphics and 3D effect, an easy interface, a great manual and good optimization work. It’s a great work overall.

The only flaw I found is the lack of Spanish and French languages in the digital release of the game, where they were cut from the physical release.

CONCLUSION:
If you enjoy puzzles games, Professor Layton and the Miracle Mask is a ‘must have’. The game features a lengthy story and a lot of content, it’s a great entry for fans of the series and for those who want to know about it. The puzzles can be challenging sometimes, but it’s worth its price.