THERE’S A CONTRADICTION IN THIS PUZZLE GAME!

Despite being released this year in the North American and European regions, this is actually the first game that the famous ace attorney was seen in 3D with full voice acting. Another thing that’s worth mentioning is this game was made using the Professor Layton and the Miracle Mask’s engine, therefore you should keep that in mind when reading this review. 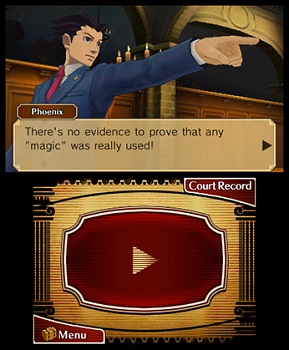 GAMEPLAY:
The Professor Layton series is about puzzles and Phoenix Wright is mostly a visual novel game with some logical thinking. When you begin the game, it will seem half like Layton and half like Phoenix, however, once you start to progress it will feel more like a Layton game.

In that case, I should separate the game into two key gameplay modes: exploring and courts. During the exploring part, you will be required to follow the story by talking to people, finding certain things, hidden hint coins and puzzles and well, exploring the place in general. Sadly, you won’t be able to go searching for evidence which feels like a punch in the stomach to the Ace Attorney fans, where there’s a limit of nine pieces.

The puzzles of the game aren’t so varied, where there’s a large presence of mazes and multiple choices of puzzles, and logical puzzles are really lacking. Most of them are practically easy, where just four or five can actually be difficult in the whole game. This also means a punch for Professor Layton fans: you can play an easy puzzle and then Layton says that was a hard puzzle, making the player think, “Wait… That was hard?”.

For the courts, you will need to read testimonies, find contradictions and search for the truth. A lot of large elements that were seen in previous Phoenix Wright games are missing, including the low quantity of evidence making it will feel like a lite version or just a basic version of the gameplay core. Still, there’s one modification of the formula: instead of hearing from multiple witnesses instead of just one. 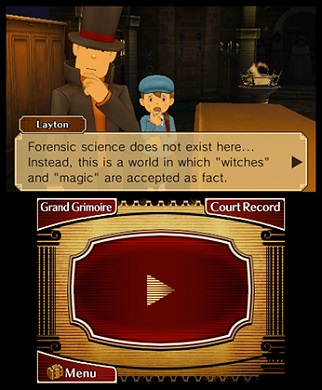 There are mixed elements from both series that work really well, or better said, Layton elements on the court parts of the game. The credibility system from the series will give you picarats and hint coins can be used.

Picarats are used to unlock bonus content once you finish the game and the more you have, the more you will get. They also tell you how difficult a puzzle is, but in this case you won’t believe this comparison at all. Losing credibility or failing attempts on puzzles will make you lose picarats, so be careful and save your game often.

Hint coins, which are hidden in the exploration parts of the game, allow you to get hints like its name suggests. From puzzles, you can get up to four hints and in the court, it will explain what to do in a big segment. Meanwhile it helps a lot, it somehow breaks the difficulty of the game, making it easier.

A good thing to add is having the ability to use buttons to explore, where it was only possible with the tactile screen. All the controls work great. A fast-skip text is a feature that this game lacks though.

The story is pretty interesting when the game begins. Once you start the final chapter of the game, discovering the truth about everything is just a disappointment, and the explanation and epilogue are painfully long. 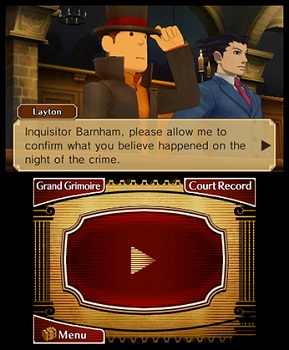 GRAPHICS AND SOUNDS:
Actually, combining a simple looking style from the Layton series and an anime based from the Ace Attorney was hard to imagine, where the work isn’t perfect but it works great. Sadly, it has some flaws that need to be considered.

Meanwhile the models are detailed, some textures look terrible, there is a large quantity of lag when three characters’ models are shown and it’s even worse when there are more characters due to the game reducing the textures’ quality a lot. This can be due to CAPCOM’s staff making the character models, meanwhile the engine was made by Level-5.

More things to mention about the poor optimization work are the broken 3D effects and the ugly compression from the anime cutscenes. Still, the work on those scenes are usually well done.

The soundtrack is nice, however, part of the game’s soundtrack is recycled and the sounds are the same from both franchises previous entries where it sounds pretty forced. The voice acting for the other side is fine for the most of the characters, except the three of the four main ones.

Layton and Luke’s voices use different voice actors. Layton’s voice sounds the same. Sadly, Luke has a female voice that sounds totally different from previous entries, however, you will get used to it with time, but it’s quite shocking when you start the game.

For Phoenix and Maya, even after considering it’s actually their first game with full voice acting, it just doesn’t fit in the whole game where Maya’s voice is torture to the ears. There is another character from this series, but I don’t want to reveal any spoilers.

I should add that French and Spanish languages are directly the same from the European release, but this time I’m not sure about the English one. 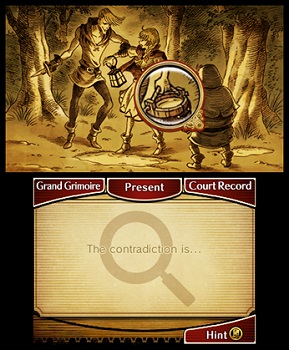 PRESENTATION:
The presentation would have been good if it wasn’t for the flaws which I won’t repeat again. The manual is great, the interface is easy to use, the game’s duration is pretty long despite how easy it is and there are cool bonuses.

Still, it works mostly as an introduction for both series instead of being a fan-service crossover game. Fans of both series will be highly disappointed because of this.

CONCLUSION
Professor Layton vs Phoenix Wright isn’t a bad game at all, however, it could have been a lot better. The character designs are excellent as they present a few good ideas but also has poor optimization work, the puzzles are easy, the court battles are short, the story is almost broken thanks to how it ends and the fan-service can some times be insulting.