Note: This review will be divided into two parts. I’ll first cover Puzzle and Dragons Z, and Puzzle and Dragons: Super Mario Bros. Edition. This is because, while being bundled in the same cartridge (except in Japan, where the games are sold separately), the two games have a few differences here and there that will be covered later in this review.

While Puzzle and Dragons may or may not sound familiar to people living in North America or Europe, if you do pronounce the Japanese name for it (Pazudora) in Japan, everyone will be able to tell you what it is. Puzzle and Dragons is, for those who do not know, a mobile game developed by GungHo Online Entertainment (To keep it short, I’ll use GungHo instead), which mixes two genres that might look like an odd mix at first glance: match-three and RPG. The game has been successful in Japan, and lately, it has been well received in North America (around 7 million downloads). Now, however, GungHo has decided to take the risk of porting its successful mobile game to the 3DS family, and it seems that Nintendo helped as well, but is the game worth it?

Note: If you’re reading to find out about the Super Mario Bros. Edition, just skip until the “Part 2” label.

So, if you decide to start Puzzle and Dragons Z, you’ll simply touch the “New Game” option on Puzzle and Dragons Z’s title menu. You’ll be prompted to tell the console your gender (reminds me of another game…), then comes a small but forgivable thing: You can only have 8 letters in your name. Seems like I won’t be able to use my nickname in that game. Nonetheless, after entering my real name, the game starts and everything begins normally.

The game takes place in a world called Dracomacia, a world where humans and dragons live together. In Dracomacia, the player is a young boy/girl striving to be a Dragon Tamer (humans with the ability to “communicate” with dragons). I won’t go further about the Puzzle and Dragons Z storyline since that would spoil the story, but despite the story having some weird stuff (like some guy talking about what kind of underwear he should wear… really weird encounter in such a game), it does the job pretty well. Oh, and a warning – expect quite some text before you get started on the game’s main element: the gameplay.

Let’s get started on the gameplay. The rules are really simple, not to say identical to the ones on the mobile game: You line up 3 or more orbs of the same element to deal with enemies in dungeons. There are six types of orbs: Fire, Water, Wood, Dark, Light and Heart. As you would expect, the sixth one gives you some health back when you have been hurt.

There are two more things you should care about: the Skill Gauge, in the bottom-right corner of the upper screen, that is used for – you guessed it – skills (with a certain exception), and Combos. Indeed, when you line up orbs, the ones on the top of those cleared will fall, and you’re free to move them freely on the board for a small amount of time each turn. The more combos you make, the more damage you’ll deal (and additionally, if you line up 3 Heart orbs – OK, they’re squares and not orb-shaped, but that’s how they are named by the game – you’ll gain more life than if you lined only 3 Heart orbs and nothing else.)

To conclude with gameplay, there’s many mechanics you’ll have to pay attention to in-game, and I can’t expose them all, it would take more than a single post. But, you should remember the most critical stuff like combos, skills, leader skills, evolution, hatching (when you get monster eggs), and powering-up your monsters (another con here, is that you can only use eggs to power-up your monsters while in the mobile game, you fuse monsters…).

Graphics-wise, it’s a 2.5D context. The whole world is in 3D, stages are in 3D… Characters, on another hand, are in 2D, however, it’s satisfying enough, and graphics generally fits the game quite well. Not to mention that seeing the monsters you’ll face move (compared to the static versions you’ll see in the mobile game) feels like a general improvement over the mobile game.

Music-wise, here as well, the job is done quite well. The music pieces fit the theme, and sometimes, they make the game a bit more immersive (the most notable example of it, is for instance, the first temple, where it really looks calm).

Conclusion (PAD-Z): Puzzle and Dragons Z is then a nice transition for those who played the mobile version and who want to take a bowl of fresh air without changing the concept. The fact that the game uses animated sprites, 2.5D context, and the presence of a storyline makes the game worth it at a certain price: Instead of the 1000+ monsters of the mobile game, Puzzle and Dragons only has 250, which is a bit small, with the monsters’ evolution lines, not to mention the modification of the power-up mechanic which became useless unless you have many times the eggs of the same monster. But overall, aside from a few things here and there that could be have been improved, the game is really good, and justifies its good sales in Japan when it was released there. Another minor thing is to enable StreetPass for this game, and to download some data* !

*If you’re a bit curious, you’ll figure it out later by talking to a certain NPC in the city. Do it, it’ll surely help you later! 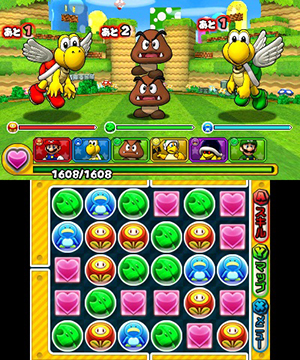 Puzzle and Dragons Z has been covered, so let’s switch to the Super Mario Bros. Edition. Here, you won’t be prompted to choose a character, enter your name or anything like that. Instead, it simply starts with the usual Mario scheme with a few Puzzle and Dragons elements: Thanks to the power of the orbs, Bowser kidnaps Peach, and it’s up (once again?) to Mario and Luigi to save her! But, your typical Mario enemy might also help you!

Puzzle and Dragons: Super Mario Bros. Edition isn’t only Puzzle and Dragons with a Mario skin on it. It features more Mario-like elements! Indeed, not only does it feature lives and scores (at the end of a stage, your score will be shown), but evolutions are using power-ups or items you usually find in Mario games (Coins, P-wings, and much more!)

Okay, okay, it doesn’t sound convincing, but it also features a 3D context for stage selection, proper Power-Up (they managed to get it right in SMB edition and miss it in Z…) mechanics (using allies to power-up other allies similar to Puzzle and Dragons on mobile does), and StreetPass features (you’ll have to enter a 9 character maximum length name, while Puzzle and Dragons Z only accepts 8, and find somebody with both the game and a 3DS). Small tip? HomePass is your friend.

Other than the few changes here and there and the Mario world with Puzzle and Dragons elements, it still plays the same, and overall, isn’t boring as you might have expected it to be. In addition, considering that you can choose your Leader and your Partner (equivalent of the Helper in the Puzzle and Dragons world), it is possible to play as Luigi.

However, I did mention 80 characters, right? When I said it, don’t expect 80 different characters. While some are recolors (Light-element Koopa is Koopa with a yellow shell and boots for instance; thanks, copy-and-paste) which is a bit disappointing, there were more creative ones (ie: Koopa and Cheep Cheep together, the two-floor Goomba tower, etc.).

But never forget in any case: everything you learn in one game generally applies to the other!

Conclusion (PAD-SMB): While the basic Mario scheme and the presence of only 80 characters might sound like something small, the Super Mario Bros. edition fixes what GungHo did wrong with Puzzle and Dragons Z. You have proper power-up mechanics, 9-character long nicknames (so you can use your NNID as your StreetPass name, and this way it’s safer when using HomePass), and better drop rates, with a few Mario elements (lives, total score). I wouldn’t call it totally different, but it does change a few things.

Final Conclusion: The two games complete themselves. While Puzzle & Dragons Z has a good storyline and a few things that could have been improved, Puzzle & Dragons: Super Mario Bros. Edition fixes those but at the cost of a stereotypical Mario storyline. They share the same gameplay elements, so switching between games is easy. The lack of monsters/characters compared to Puzzle & Dragons on mobile (200/80 compared to the 1000+ monsters) might make the game look a bit light. Overall though, the two games are still fun to play, and the controls are adapted to the 3DS/2DS systems and feel even better than playing on the mobile (due to the stylus being more precise). So it’s quite good, and worth its price (about €30 in Europe,  $30 in NA and £25 in the UK).